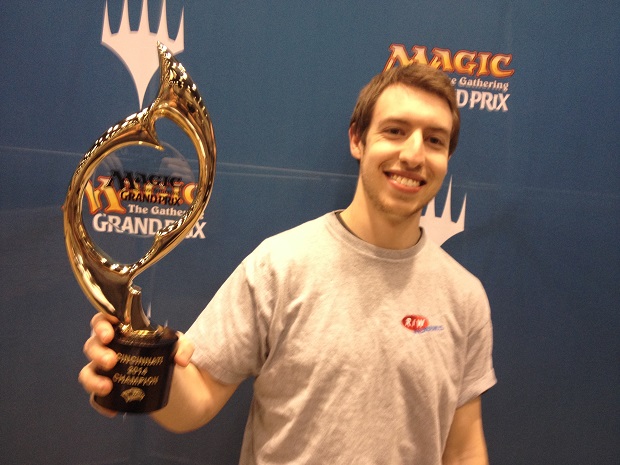 rior to the finals, Kyle Boggemes lamented his tournament life constantly winning "steak knives" as he called them—the joke prize he said everyone who finished second should receive. He joked—well, half joked—that he had won a lot of steak knives in his time.

This time Boggemes was skipping the knives and taking home the trophy.

Expertly maneuvering his Esper Control deck through a diverse field, Boggemes found his way into the finals against former Player of the Year and Standard Grand Prix Master Brad Nelson playing, you guessed it, Esper Control. After two relatively short games—for an Esper mirror, anyway—Boggemes bested Nelson and finally claimed his first crown.

Before moving on, we need to take a moment to appreciate what Nelson did here. It seems like every time there's a Standard Grand Prix in the United States, Nelson finds himself in the Top 8 playing a variety of different decks—from the most aggressive lists to, well, Esper Control. He's clearly demonstrated his mastery and devotion to the format.

Speaking of Devotion, the Blue and Black Devotion decks were everywhere this weekend, mixing with Esper and Jund Monsters to really define what Grand Prix Cincinnati was all about. It's another in a long line of evolutions of the format that, without a doubt, will adapt again to the results this weekend.

But right now the tournament belongs to Kyle Boggemes and Esper Control. Congratulations to Kyle, champion of Grand Prix Cincinnati!

4 Desecration Demon 2 Whip of Erebos 2 Erebos, God of the Dead

4 Master of Waves 1 Ephara, God of the Polis 2 Bident of Thassa 2 Domestication