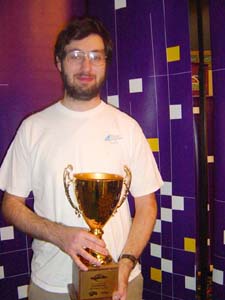 Amateur Valentin Moskovich has won Grand Prix - Cleveland! It felt like destiny as he breezed past Adam Prosak and Jeremy Pinter in two straight sweeps on the way to the finals. Of the established names, only Gab Tsang emerged from the quarterfinal rounds. In the semis, he put away underdog Matthew Schempp in two straight. The heavy fan-favorite, the applause on Tsang's announcement to the Top 8 was the loudest, and his matches were ringed by supporters. Preparations were underway for a "Congratulations Gab" party to be held after he, naturally, took the finals.

Moskovich had other ideas. His mono-black control deck, the only one of twenty-four played on day two, had served him well. Even if the matchup against Tsang's Speculation wasn't the best, he had shown the mettle and the talent becoming of a champion. He took the first, quickly, and his confidence swelled, almost overtaking him. A drubbing from Tsang in Game 2 pulled the wind right out of his sails. A quick pep talk from his friends, and it was on to the deciding game. Tsang mulliganed, then kept a hand that degenerated into an ugly four spell, fifteen land draw. Moskovich stomped to victory.

Moskovich not only takes home first place honors and the prize that goes with it, but also the Top Amateur prize, claiming a total of $3900! And all that with zero byes to his name on Saturday. Not a bad weekend's work. Congratulations to Valentin Moskovich, Grand Prix - Cleveland Champion!