Bob Maher is the champion of GP Copenhagen!

64 players were faced with the challenge of having to draft the new format. Opinions differed on what strategies should be used. Blue was regarded as by far the worst colour but it also presented opportunities should no one else choose to draft it. While red, with the best common in the set in Sparksmith, and also great depth was very popular.

Out of a very tough Day two emerged yet another top 8 that would grace any Pro Tour. European Grand Prix's are just tough. Kai Budde was there, as was fellow Phoenix Foundation team mate Dirk Baberowski. Jens Krause, fresh off a Top 8 finish two weeks ago in GP Hamburg was the third German. A trio of Swedes – Fredric Boberg, David Linder and the always impressive Jens Thorén – took a further three places. The remaining slots were taken by solid Frenchman Florent Jeudon and the American Bob Maher, on a hot streak after his top 4 finish in the team Pro Tour in Boston. Sadly the host nation failed to defend its GP as successfully as it had in previous years with no Danish players drafting at the final table.

In the end the draft got turned on its head as Maher and Krause found themselves the only green mages on the table. Predictably they met in the final where Maher's deck proved itself to be just too brutal. Ominously Kai Budde's third place finish nosed him ahead of Dirk Baberowski and already the German player has established a lead in the race for Player of the Year. 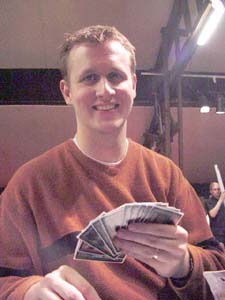