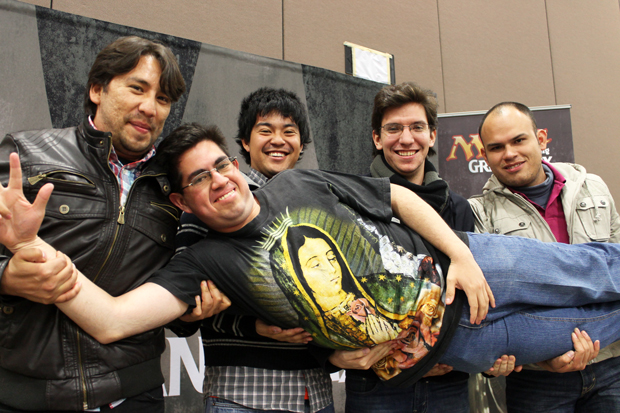 ariation is the spice of life, and we were treated to a veritable spice rack all weekend long. Esper Control transitioned into Azorius Control. Monowhite Aggro featuring Boros Charm became Monowhite Aggro featuring Orzhov Charm. And most notably, Monoblack Devotion took a back seat in the Top 8 for Orzhov Control. Orzhov Control was seen cracking the Top 16 at Vienna last week, and it managed to not only crack the Top 8, but take down the whole shebang here in frosty Fort Worth.

Hailing from Mexico City, Marlon Gutierrez did not have an easy road to becoming the champion here at Grand Prix Dallas/Fort Worth. In addition to a twelve hour trek through the ice and freezing rain, Gutierrez found himself facing three of the toughest opponents in Magic in his Top 8 matches. He began by dispatching Seth Manfield's Azorius Control deck in the quarterfinals. He followed that up with back-to-back matches against Hall of Famers, first top-ranked Ben Stark and his Monowhite Aggro deck, then William Jensen and his Azorius Control deck. The finals were a very tight affair, but Gutierrez's Thoughtseizes came at the right times and hit the right targets to swing things in his favor.

This weekend was a coming out party in many senses of the phrase. From Last Breath enabling Azorius Control's rise, to the strong performances of the Orzhov variant of Monowhite Aggro, it was fitting that one of the two Mexican players in the Top 8 broke through to take the title. The timing couldn't have been better, either, with Grand Prix Mexico City, Gutierrez's hometown, on the horizon. Here in February, Gutierrez will have a chance to repeat his title in his hometown, and, if he plays like he did this weekend, he will stand a great chance of doing just that.

4 Nightveil Specter 4 Thassa, God of the Sea 1 Wall of Frost

4 Master of Waves 3 Bident of Thassa 2 Jace, Architect of Thought

4 Master of Waves 4 Thassa, God of the Sea 2 Jace, Architect of Thought
75 Cards

2 Ajani, Caller of the Pride
75 Cards

1 Pithing Needle 4 Soldier of the Pantheon

4 Chained to the Rocks 4 Shock