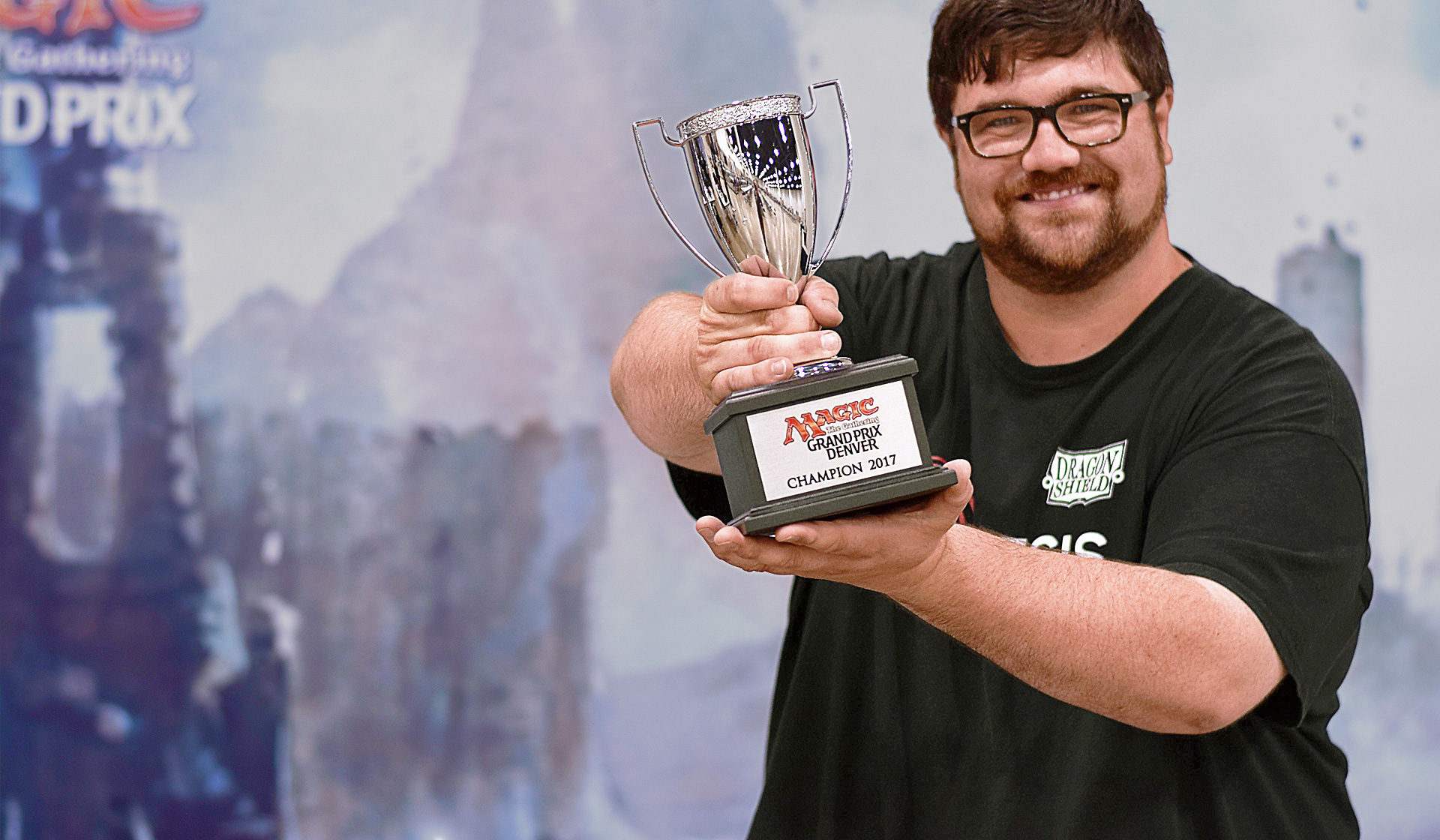 In a Top 8 for the ages, (7) Brad Nelson beats both his best bud Brian Braun-Duin and his brother Corey Baumeister in the Finals and Semifinals—while all playing the exact same Temur Energy deck. Yes, that's back-to-back for Brad and Baumeister.

THE HASHTAG FOR GRAND PRIX DENVER IS #GPDEN. JOIN THE CONVERSATION.

"I mean, I don't know even know what to say right now," was all seventh-ranked Brad Nelson could utter when he realized he was about to face his brother Corey Baumeister in the semifinals. It was already an historic moment, as before this Brad and Corey became the first brothers in the history of Magicto both Top 8 Grands Prix back to back! They finished in the elimination rounds at Grand Prix Minneapolis two weeks ago, and now they're here.

And to think, Brad didn't even want to come because he didn't know what to play. It was finalist Brian Braun-Duin who provided him the Temur Energy list that he wielded against the World Champ in the finals—and why shouldn't he? He had just done the same thing to his brother, also on the tri-color list.

Look at whatever stat you want—Brad will now be Ranked 1 in the world and Corey Ranked 2; Brad, Brian, and Corey finished first, second, and fourth; none of the three friends lost to anyone in the Top 8 but each other. Cherry-pick whichever you like the most, or find yet another in the innumerable historically cool things about Grand Prix Denver.

Hour of Devastation Standard is great. Friends succeeding together is better. Brothers doing the same is magic.

Wow was it a wild ride! Wow, wow, wow. I know that might not make for the best start to an article, but who cares?! Grand Prix Denver, the Top 8, and Hour of Devastation Standard have made for a...

It was an amazing weekend, and these players played the most amazing-ist! Check out this menagerie of lists! ...

Just because a deck doesn't make the Top 8, doesn't mean it's sweet and awesome, and lovable, and playable. Check out the Top 32 lists below, and plus, as I had promised someone on Twitter, Alex...

Learn more about Grand Prix Denver's Top 8 competitors—including who they are, what they've done in the game, and more—by taking a look through their profiles! Name: John Rolf Age:...

What an amazing day it's been in Denver! The Hour of DevastationStandard format is filling out exactly as we all hoped. Tons of decks are not just playable, but good! You like Zombies, play those duders. What about casting Ulamog, the Ceaseless Hunger? Gotchu covered. How about a slow, grinding control deck that makes everyone else miserable? Oh yeah! What about Horses? Ok, well maybe not horses...yet.

But there's plenty of players following closely behind. Way too many to name here, but the Bash Brothers, (7) Brad Nelson and Corey Baumeister are just a step behind in the standings, and they don't take too kindly to that.

We'll see tomorrow which players can stand up to the pressure cooker, and which fold like a cheap card table.

Join us at 9 am MDT at twitch.tv/magic for all the action! See you then!

The first nine rounds of Grand Prix Denver are in the books! The triumphant return to Hour of Devastation Standard after a week of Modernity has been a rousing success so far. People were afraid...

How often do you really want to just completely "greed out" in Magic? I'm talking full on greed-ball, here. How often do you just want to say, "No, I want this one in the deck too! I need it! I...

With such a burgeoning Standard format that Hour of Devastation (and maybe a ban or two) has brought us, you probably want to see as many deck lists as possible. Well in that case, here are some...