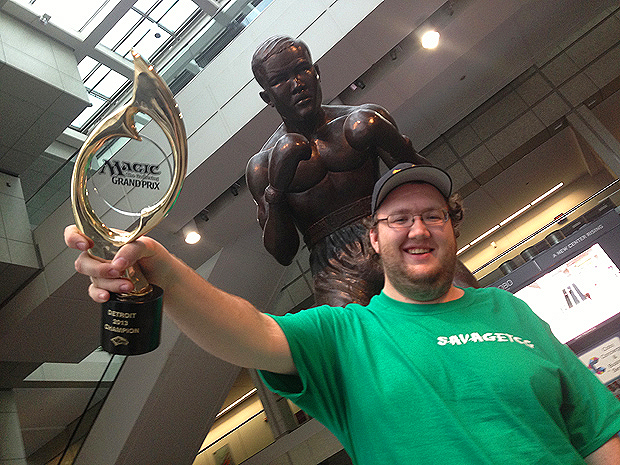 ith a deck built to be part machine, part creature, and all combo, Josh McClain brought a third victory for the Melira, Sylvok Outcast and Birthing Pod deck in as many Grand Prix. After falling in defeat to Reid Duke in the finals of Grand Prix Miami, McClain had his revenge and policed the Jund menace that put six decks into the Top 8. While Melira-Pod was a constant threat throughout the weekend, it was only at the end of the event it mattered most.

Duke's Jund was one of many flavors found over the weekend, and the dominating presence of Deathrite Shaman and Lightning Bolt was felt throughout. Modern is a format alive with diversity. Day 2 alone featured thirty-seven different types of decks, with those among the top tables drifting from combo to control to midrange and back again. In the end it was Jund that took the most top slots the longest despite Melira-Pod's final performance.

As we move on from Detroit, we know it won't be long for amazing Magic to happen again. With the Theros Prerelease and release events coming soon, everyone can get in on the action. After that, we'll revisit Modern in Oklahoma City to find out if Theros can push new decks to the top of the format.

Farewell from Detroit. We'll see you next time!

4 Liliana of the Veil 1 Elspeth, Knight-Errant 1 Sorin, Lord of Innistrad

4 Lightning Bolt 3 Bonfire of the Damned

3 Valakut, the Molten Pinnacle 4 Scapeshift 1 Boseiju, Who Shelters All 1 Cavern of Souls
75 Cards

2 Rest in Peace 1 Ray of Revelation