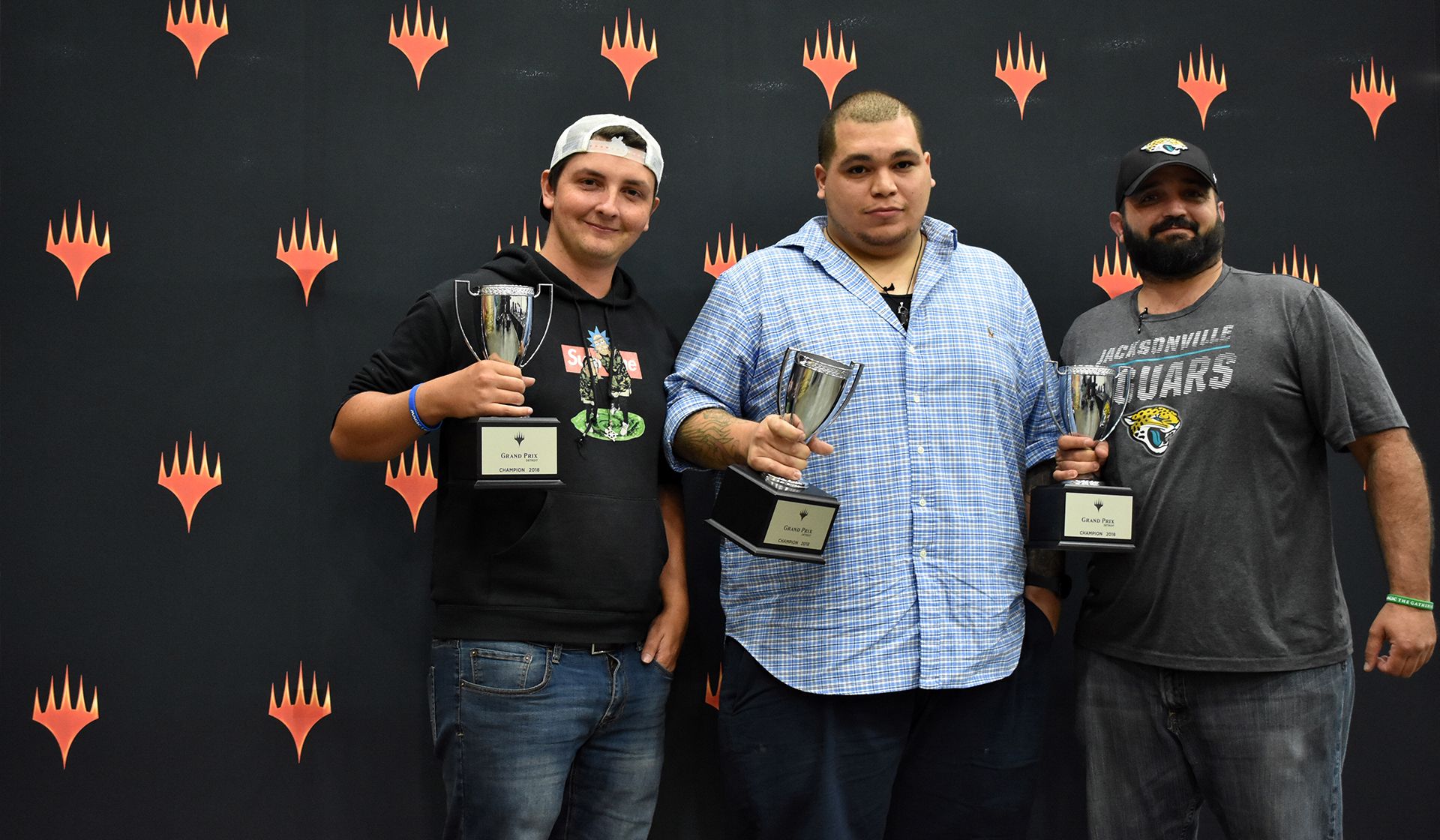 Courson, Lopez and Perez defeated a team of pros to make their mark in Detroit.

THE HASHTAG FOR GRAND PRIX DETROIT IS #GPDETROIT. JOIN THE CONVERSATION.

Team Unified Modern revved to life in Motor City, and it was the teamwork and camaraderie of William Courson, Antonio Perez and Andrew Lopez that took home well-earned trophies.

After rallying back from 3-2 on Day 1, they didn't drop a single match for the rest of the tournament, eventually defeating the powerhouse team of pros Paulo Vitor Damo da Rosa, Matt Nass and Sam Pardee. Playing two familiar decks—and one brand new as of Saturday morning—Courson, Perez and Lopez lived the Rocky movie mantra "We're not going down no more." all the way through to hoist the trio of trophies on Sunday. Picked up Bronze status and earning Pro Tour qualifications was a dream hard earned for the Jacksonville crew.

In other titles on the line, all three Player of the Year contentenders—top-ranked Seth Manfield, 2nd-ranked Reid Duke and 2nd-ranked Luis Salvatto—each took their shot at jumping ahead. Ultimately, all three players' teams fell short of their goal and the lead remained firmly in Manfield's favor. Now just Grand Prix Stockholm—before the 2018 World Championship—was the last stop in the Grand Prix season to sort out who would claim the title.

But for the Jacksonville crew it was back to life and usual, and luggage weighted by their hard-fought victory. Congratulations again to William Courson, Antonio Perez and Andrew Lopez, champions of Grand Prix Detroit.

A quiet showdown of 65 teams kicked off a fast-paced Day 1 at Grand Prix Detroit. Here what you missed off-camera under the Sunday lights. Player of the Year Wrap Up The the three-way race still...

After 14 rounds only four teams remained to claim the top prize at Grand Prix Detroit. These are the Team Unified Modern decklists for the Top 4! ...

After fourteen rounds of Team Unified Modern, only four teams could move on to the finals. Congratulations to the Top 4 teams of Grand Prix Detroit! William Courson, Antonio Perez, and Andrew...

How do you field three unique Modern decks and make your way to an 8-0 record? The teams of Eric English, Christian Baker, Nick D'Ambrose and Anderson LeClair, Matthew Hoffmann, Alex Hinkley—all...

Two Rochester NY teams have trained into the Motor City and took over. The teams of Eric English, Christian Baker, Nick Dambrose and Anderson Leclair, Matthew Hoffmann, Alex Hinkley are the only ones to emerged unscathed.

After eight rounds of intense Modern action, we're left with two teams looking down upon the rest. It's a shame that the teams of Eric English, Christian Baker, Nick Dambrose and Anderson Leclair, Matthew Hoffmann, Alex Hinkley will have to face off in the first round tomorrow, because at the end of today, it was all jovial hugs and smiles as both teams hail from the same small corner of Upstate New York.

But nothing gold can stay. Even after squaring off, the rest of the racers will be ready to puncture their tires. Corey Burkhart, (6) Martin Juza, and Corey Baumeister; Jacob Wilson, Ben Friedman, and Rob Pisano; Paulo Vitor Damo da Rosa, (18) Matt Nass, and Sam Pardee are just a few of the teams at one loss — and they've still got a lot left in the tank tomorrow.

In the Player of the Year race, leader (1) Seth Manfield didn't make the cut, but both (2) Reid Duke, and (3) Luis Salvatto squeaked into the second day. They'll have a great opportunity to put some more points on their scoreboard on Sunday.

See you all tomorrow at 9 am local time at twitch.tv/magic. See you then!

Modern motored into Motor City, bringing well over 500 teams and plenty of stories to share. From the Player of the Year race to powerful Planeswalking cosplayers and Rochester, New York emerging...