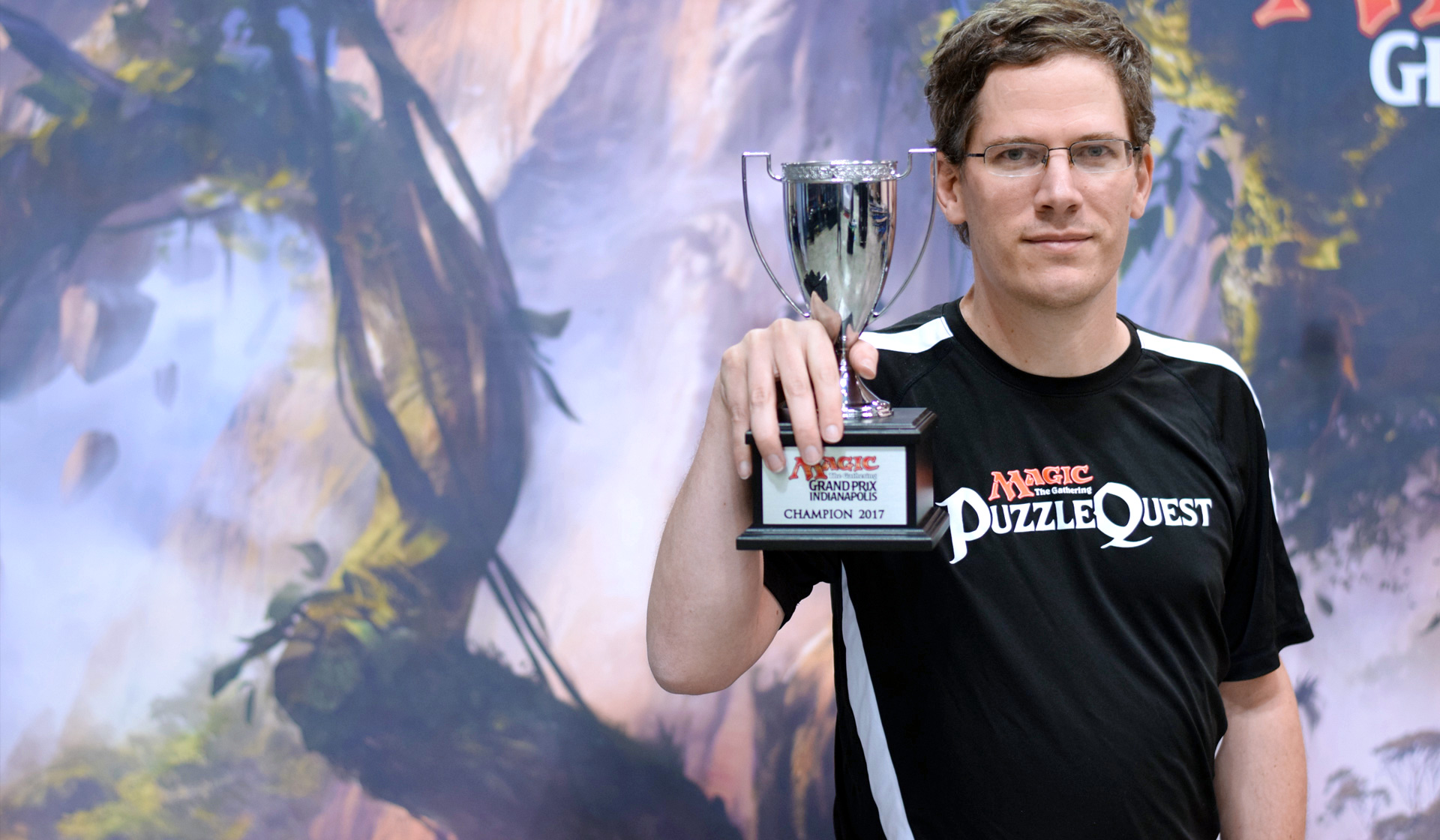 With a deck headlined by the powerful eight-mana White enchantment, Overwhelming Splendor, Andrew Cuneo cruised though the Indy Top 8 and added some hardware to his mantel.

THE HASHTAG FOR GRAND PRIX INDIANAPOLIS IS #GPINDY. JOIN THE CONVERSATION.

Though this weekend with 1169 players in Indianapolis could have been a gentle coda to the wonder that was Hour of Devastation Limited, it stayed exciting all the way through the finals! Team Puzzle Quest's Andrew Cuneo earned his first singles win, defeating Kyle Boggemes, who until that point had been the giant killer in the room. Cuneo proved to be unslayable, and leaned on his Overwhelming Splendor throughout the Top 8 to secure the gold. It's his third straight Limited Top 8!

Tons of action highlighted the whole weekend. With Boggemes playing Pro Tour Indianapolis, Team Massdrop West's Scott Lipp making locusts aflutter, Andrew Funkhouser not dropping a game in the first day, and even a muppet appearance or two, everyone was having a grand old time.

By many pro's standards, Hour of Devastation will go down as one of the best Limited formats in years. Though it's time to say goodbye to the world of pyramids, and mummies, and criosphinxes, we'll soon wave hello to pirates, dinosaurs, and whatever else Ixalanhas in store for us mere mortals. There's always another Limited season on the horizon, and another sun approaching.

From all in Indy, have a great night!

Want to see what rose to the top of Grand Prix Indianapolis? Then take a look at the Top 8 competitors' decklists! ...

Learn more about Grand Prix Indianapolis' Top 8 competitors—including who they are, what they've done in the game, and more—by taking a look through their profiles! Name: Kyle Boggemes Age:...

It’s a bittersweet day for many in Indiana. Though the Grand Prix has been fantastic—full of punches from haymakers to jabs—today signaled the last day of Hour of Devastation Sealed Grand Prix. These nine rounds put it out for the count. One of the most fun Sealed formats in a long time, Hour of Devastation fulfilled all our wildest dreams for the second set of the Amonkhet block.

But don’t pick up the tissues just yet! Tomorrow starts the Draft portion, and at least five players will be thinking about that fact late into tonight. Scott Lipp, Andrew Cuneo, Mark Ruby, Aaron Lewis, and Andrew Funkhouser lead the pack at 9-0. Tomorrow it will be their fight to lose.

With three packs their weapons, they'll enter the ring against myriad opponents and try to outlast them all. The brawls will surely be devastating, and not to be missed.

We'll see you all tomorrow at twitch.tv/magic, bright and early at 9 am. See you then!

Action was all over the arena the first day of Grand Prix Indianapolis. Hour of Devastation love hasn't waned, as players can’t get enough of the Limited wonderland on Amonkhet. From the first...