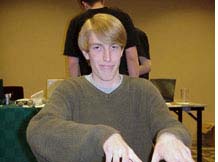 Armed only with an Extended Sligh deck, newcomer Mark Gordon managed to duel his way to first place victory and $2,400 at Grand Prix Kansas City. Gordon won despite a teeming sea of blue control decks, many of which were wielded by the best players of the game. In addition to these praises, Gordon can boast having won the tournament without the advantage of the three-round bye afforded to much of his Top-8 competition.

The Grand Prix, which occurred March 27-28, brought a surprising 458 players to compete, a record for this type of event in North America. After six long rounds, the top 64 was left to those players who had a 4-0-2 record or better.

Among the competition to beat in a field dominated by High Tide and Forbidian decks were pro players such as Randy Buehler, Nate Clarke, Jon Finkel, Gary Krakower, Erik Lauer, Chris Pikula, Ben Rubin, and Steven O'Mahoney-Schwartz, just to name a few. Half of the these players placed in the top eight, none of whom were playing the infamous Jar decks so heavily anticipated in this environment.

With the DCI's restriction of Memory Jar and other key combo cards going into effect April 1st, the Grand Prix punctuated what many hoped to be the last days of "Combo Winter", as it is called. Players knew that in order to reach the finals, an answer to such turn-three-kill decks as Memory Jar and Fluctuator would be necessary. Force of Will and Null Rod proved up to the task.

Finkel's skillful play was ultimately insufficient to stop Seville, whose Arcane Laboratory took him to the quarterfinals, where he lost to Pikula. Gordon defeated Buehler's Forbidian deck as a precursor to the finals, stopping first to defeat Maher in the semis.

Gordon faced Pikula in the final round and won 2-1. The best play of the match occurred when Pikula escaped a beatdown in the second duel by blocking Gordon's Jackal Pup with his Morphling, and then pumping the nigh-untargetable blue favorite until it could channel a lethal amount of combat damage back to the Pup's controller. The third duel ended swiftly with another fast attack from Gordon's red creatures, including a Raging Goblin that proved itself a surprisingly strong force against the prevalent blue decks.

Champion Mark Gordon came into Kansas city with only nine games of sanctioned Extended experience and a rating just above 1600. After going 13-2 over the weekend with victories against such Pro Tour luminaries as Randy Buehler and Chris Pikula, that rating should increase a bit.

Kansas City weather cooperated for the event, offering plenty of sunshine in which to enjoy the city's famous BBQ. Other highlights in this weekend of non-stop competition included watching the organizing staff scramble cards together to replace a competitor's vanished Sligh deck and hearing Head Judge Nat Fairbanks invoke Sword of the Chosen as the least advantageous card with which to fill an incomplete sideboard registration.