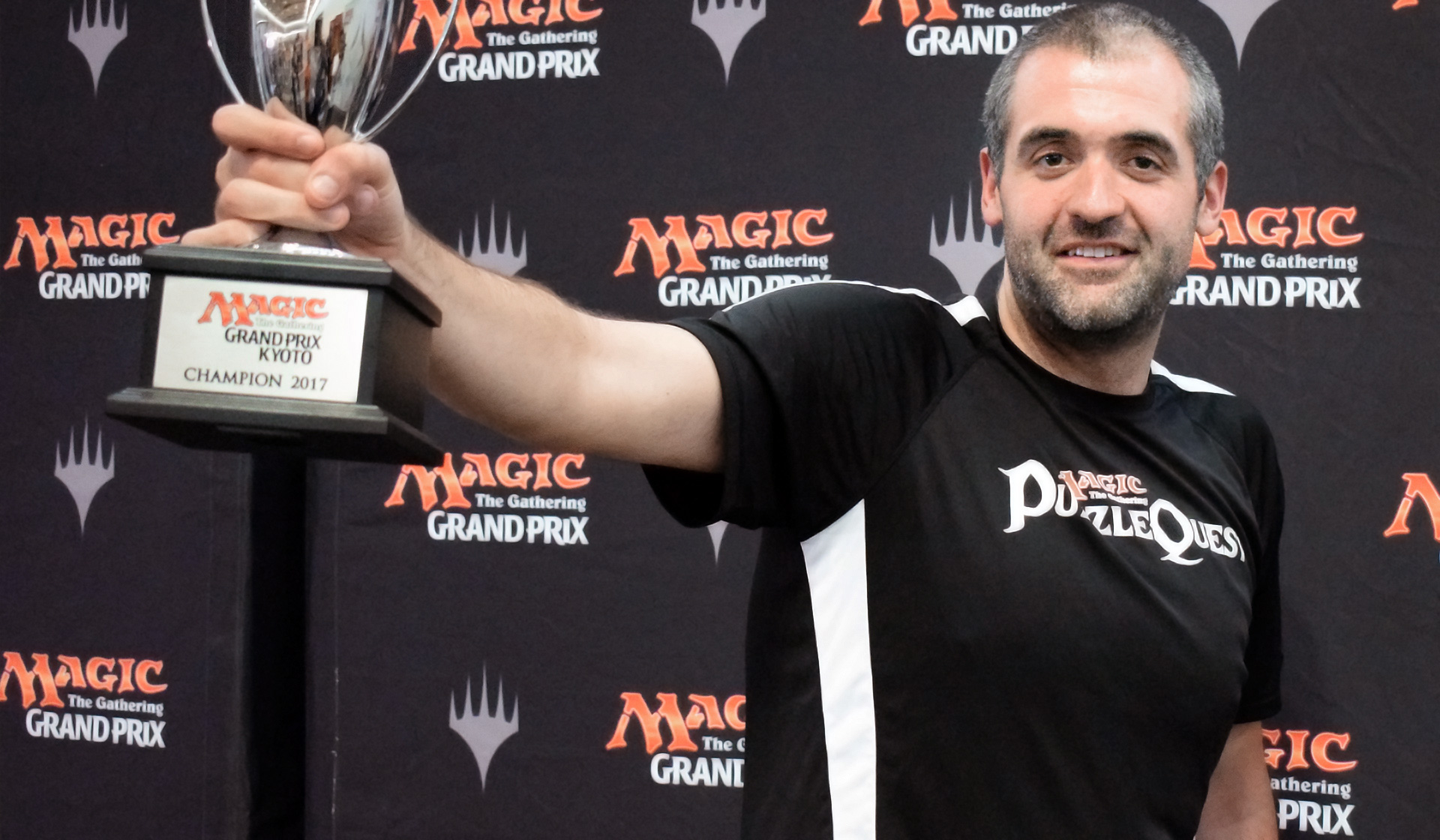 In two consecutive Grands Prix, here and in Cleveland, Hall of Famer William Jensen skyrocketed himself to near Platinum status, netting two trophies in the process. He defeated Atsuki Kihara 2-0 in the finals of Kyoto in a stacked Top 8.

THE HASHTAG FOR GRAND PRIX KYOTO 2017 IS #GPKYOTO. JOIN THE CONVERSATION

This inaugural outing of Hour of Devastation, the second set of Amonkhet, has been a raucous ride! After a semifinals for the ages between Hall of Fame heavyweights Jon Finkel and William "Huey" Jensen, it was Jensen who grabbed the trophy—dispatching both Finkel, then Tokyo native Atsuki Kihara in the finals. Jensen's powerful Nest of Scarabs-Archfiend of Ifnir combo wrecked havoc, making pyramid-loads of insects while laying wastes to his opponents' creatures.

Jensen has all-but clinched Platinum player status with this second win, but he's not the only one who made moves this weekend. Semifinalist (16) Martin Müller clinched Platinum himself after going 13-0 in the Swiss rounds. He too had a quiet early season, but has roared back with a vengeance, going from 14 pro points three months ago all the way to the top.

Hour of Devastation has ironically brought good tidings for so many players. The Limited format has diversified and accentuated Amonkhet's strengths making an incredible deck-building and gameplay environment. We'll see what more glory awaits us at Pro Tour Hour of Devastation next weekend!

The God-Pharaoh has rewarded us all, but he saved his final reward for Huey.

Grand Prix Kyoto 2017 was just as eventful as any other, if not more. With a huge influx of international pro players combined with the enthusiastic local community, it was an weekend which...

After 15 rounds of competition, we are down to the final eight players. Let’s meet these talented players who have displayed mastery of the Amonkhet/Hour of Devastation format. Just one more...

From Kyoto to Kyoto by Chapman Sim

All cultures have their own "civil wars". Minor ones that last a day, and some others last for generations. Which way do you “install” the toilet roll? Should we have the seat up or seat down?...

After nine rounds of Amonkhet/Hour of Devastation Sealed Deck, we reduced the field of 2,398 players down to just 752! Among them, nine esteemed players achieved the perfect 9-0...

2,398 players arrived at Kyoto, one of two stops of this exciting double Grand Prix weekend! After nine rounds of Sealed Deck, 752 players will return tomorrow for six rounds of Amonkhet/Hour of Devastation Booster Draft.

With the field so heavily stacked, Day 2 looks to be extremely, extemely intense. Day 1 is done here at Kyoto but things are just getting started in Toronto! We promise we'll be back tomorrow, with even more epic stories than you can imagine!

2,398 players arrived at Kyoto, one of two stops of this exciting double Grand Prix weekend! After nine rounds of Sealed Deck, 752 players will return tomorrow for six rounds of Amonkhet/Hour of...

The Friday before any Grand Prix is always a great time to participate in Grand Prix Trials. Not only do you get a chance to familiarize yourself with the format for the main event on Saturday and...