With 1,209 competitors, Liverpool's was the biggest of the weekend's three Grand Prix events, and a number of big stories came out of it too. Talk of the tournament was of course the ongoing development of strategies for Ixalan Sealed Deck and Booster Draft. The format had been around for a while by now, but the exploration continued, with minor and major shifts in player perception of what was possible or even desirable.

A lot of folks noted just how different the two Limited formats really were, especially the speed at which games typically progressed. As Pro Tour Born of the Gods quarterfinalist Christian Seibold warned with regards to Sealed Deck construction: "You mustn't try to build an Ixalan Draft deck."

Indeed, the two appeared to be following completely different rules. Mitchell Manders, champion of Grand Prix Bilbao 2013, summed it up best when he said, "In Sealed you want synergy and power. In Booster Draft, on the other hand, you want synergy and tempo. Auras and cheap tricks like Skulduggery are often better than removal, while in Sealed Deck it's exactly the other way around." 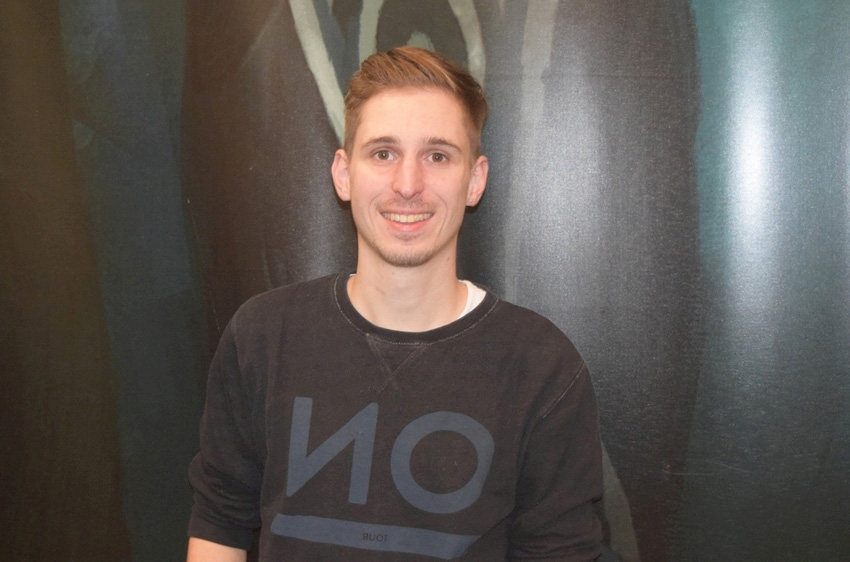 Manders, like many, listed the high-end removal spell du jour as the prime example here: "Contract Killing is not very good in Booster Draft. However, it's really strong in Sealed Deck, whereas Skulduggery is merely okay there."

World Championship finalist (13) Javier Dominguez pointed out: "The big cards are actually good [in Sealed Deck]. And treasures are great here. In Draft, Contract Killing will sometimes leave you with treasures that you literally have zero use for, which is quite unlike the situation in Sealed. I definitely was surprised by how good treasures were; probably the biggest reason why I like blue-black best of all color combinations."

Gold pro Federico del Basso, in any case, was very fond of the format: "It's very beautiful. When drafting the solution is to find the open tribal deck. Personally, I love Merfolk. Merfolk is the absolute best!" 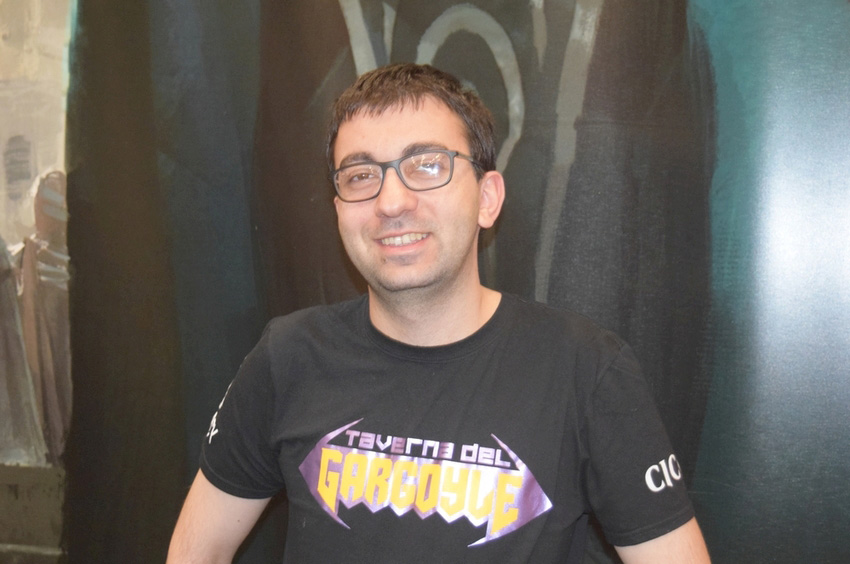 Of course, everyone had their own opinions, and Aaron Brackmann, a blast from the past with a Pro Tour finals appearance dating eleven years ago, blasted Merfolk: "When you're drafting Merfolk, or Vampires—even if you moved into the archetype for very good reasons—it can happen that the cards just don't come and there's nothing you can do about it. In most draft formats, you can give up one of your two colors when it dries up and retain the other. But if you're on Merfolk and the Merfolk cards fail to materialize, you're [in a pickle]."

Brackmann explained that that was why he liked Pirates. "I usually start out drafting the best Pirates from all three colors and then see where I end up at. Pirate decks can be blue-black, blue-red, black-red, or some mix even; they can be very aggressive or rather control-oriented. There's a lot of flexibility when drafting Pirates."

The same should be true about the equally three-colored Dinosaur tribe, in theory, but Brackmann had nothing nice—or remotely quotable—to say about them. Still, I was glad for this analysis, although, sadly, it didn't help Brackmann. He never made it to the Booster Draft portion and was gone before I could even take his photo.

The Many Faces of Ixalan Draft

The draft format skews aggressive is a truism I've read somewhere or other before. Maybe multiple times. Maybe you did too.

For instance, there's this black-red strategy with lots of 1-drops and as many copies of Swashbuckling as possible, which was first popularized by Christian Calcano. Thoralf Severin tried to copy Calcano's deck in the second draft of Grand Prix Liverpool and he was quite succesful with it, entering the Top 8 in first place: 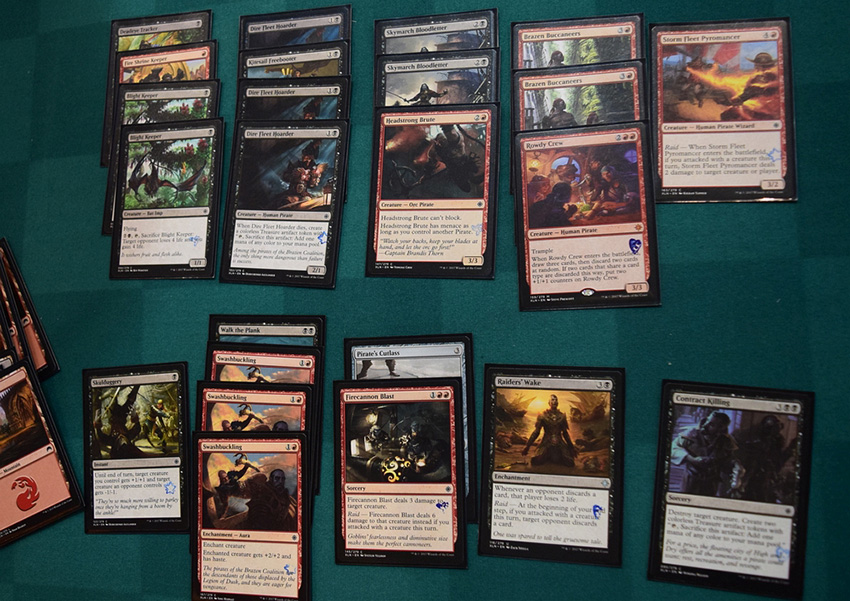 Severin was so happy with it, in fact, that he immediately drafted another copy of the deck in the Top 8!

Red-white was another color combination which exemplified the aggressive nature of the format. The most beautiful incarnation that was to be found this weekend came courtesy of Dominic Ulke, a quarterfinalist at this year's German Nationals: 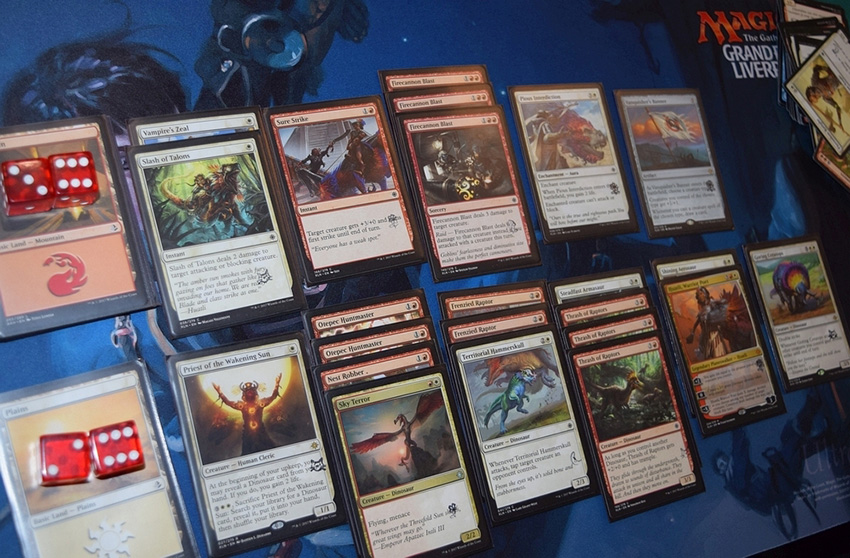 "Goring Ceratops may not belong here," Ulke admitted. "But when you have two Otepec Huntmaster, you kinda have to play it, right?"

However, not all draft decks were all-in on aggression. Vampires, while obviously blood-thirsty, would often follow a game plan more geared toward the midgame… 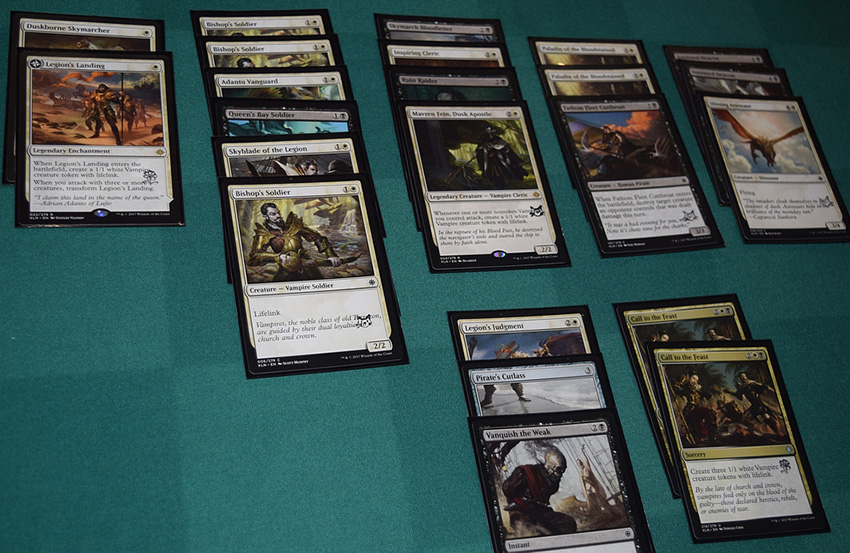 Once again, one could rely on Thoralf Severin to deliver a perfect specimen of the archetype. The above, with its highlights of two Anointed Deacon and three rares, went undefeated in the first draft.

Finally, something like a control strategy was possible as well, even in Draft. At least Alexander Kreuz, a longtime player with a bunch of Pro Tour appearances to his name, assured me of this. "Tempo is a big factor, but there are ways to keep up with the aggressive decks," he said. "Good blockers like Desperate Castaways, Skittering Heartstopper, and especially Sailor of Means can go a long way." 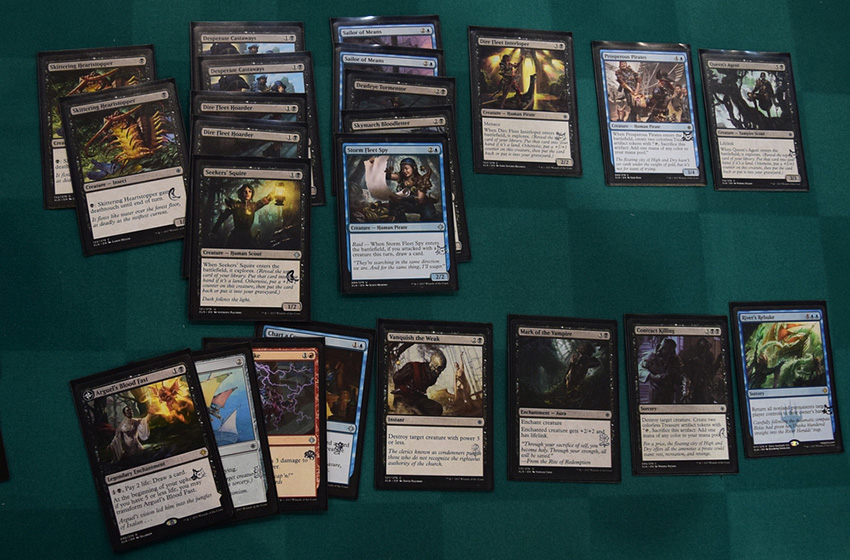 "This particular deck's game plan was rather dependent on Arguel's Blood Fast to pull ahead on cards and on River's Rebuke to finish games," Kreuz admitted. "But the strategy as such is sound. Although it often involves splashing more cards off of treasure."

A Top 8 Filled with Newcomers

In the run-up to the following week's Pro Tour, most European pro players had already left the continent and spent this triple-GP weekend in the States. This opened up an opportunity for a new class of up-and-coming players to prove their mettle at Grand Prix Liverpool. And they did. The Top 8 featured but two players who had made it this far at a Grand Prix before: Carmine D'Aniello and Thoralf Severin. For all the others this was their first time in the spotlight. 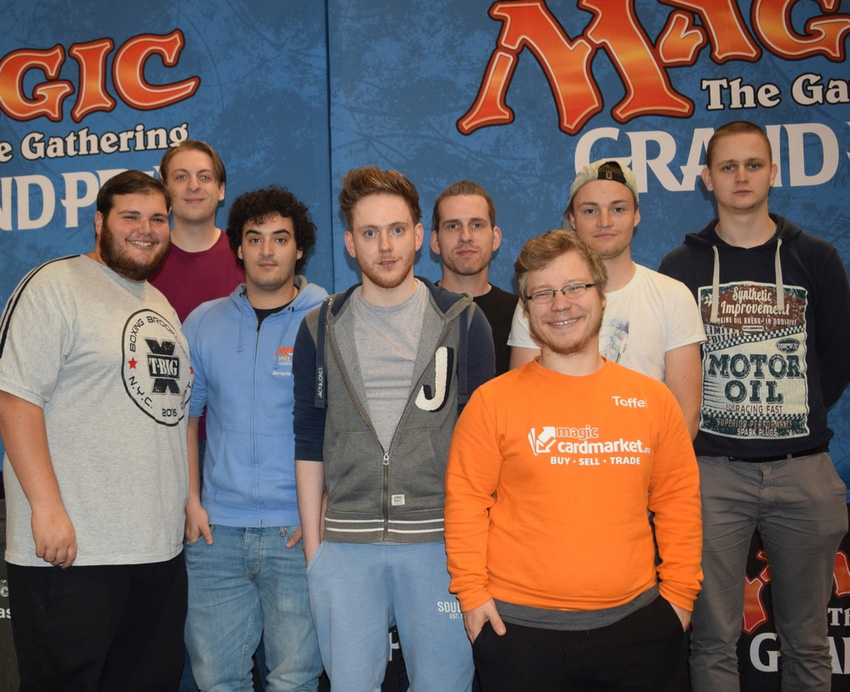 D'Aniello and Severin, after the latter defeated the former in the quarterfinals, even fell as quickly as possible, leaving the newcomers to duke it out among themselves.

This also was one of the youngest Grand Prix Top 8s in recent memory, with a full six of the players in their mid-twenties, and no one older than 31.

It probably needs mentioning that one of the above people had been around way longer than any of the others. I was already doing coverage when Thoralf "Toffel" Severin made his first Top 8, at German Nationals 2008, and when he first reached the playoffs of a Grand Prix a few years later.

Severin even did a bit of video coverage himself and was regularly featured at European Grand Prix events when he didn't. It really was no coincidence that I took photos of Severin's draft decks long before he had secured a Top 8 berth at this tournament either.

Stoked as anything for @ToffelMTG crushing the Swiss at #GPLiverpool. Go go go you sweet boy :')

The Final Battle Between Dinos and ... Other Dinos

Finalist Torsten Anders admitted that the white-black based deck he had drafted looked somewhat weird, especially on paper. It was a shrewd mix between Vampires, Pirates, and Dinosaurs, and it didn't follow any of the established patterns of Ixalan Limited.

Marc Purvis's Red-White Aggro, meanwhile, featured sizeable contributions by all of the same tribes, but this was accepted as one of the strengths of the archetype after all: the ability to operate on whatever creature type was available. 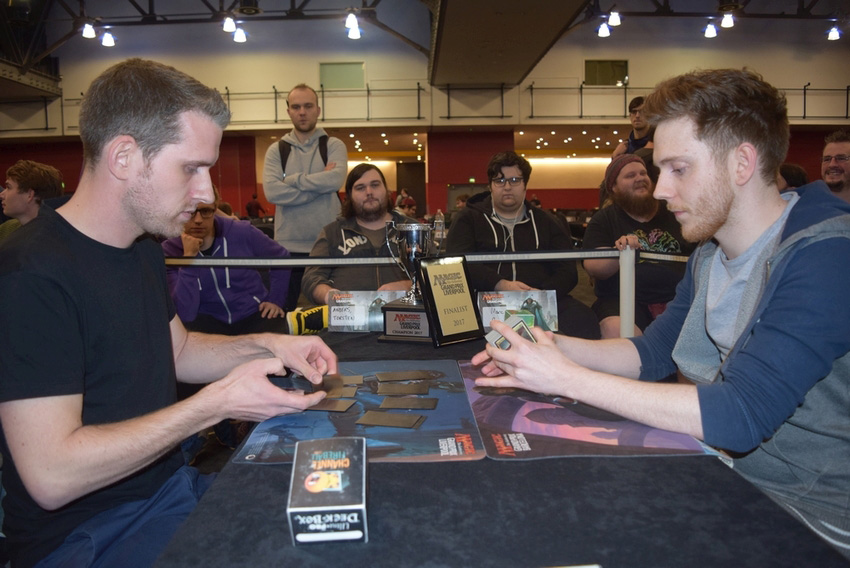 Now it all came down to one more match to determine the champion of Grand Prix Liverpool 2017. Would Purvis prevail or would Anders be able to take control in yet another match?

The first game began with Purvis losing Raptor Companion to Vanquish the Weak, but his Territorial Hammerskull avoided the same fate thanks to Sheltering Light. The Hammerskull attacked again and again and, at some point along the way, it even picked up Pirate's Cutlass.

Anders's creatures could neither race nor block, especially when Purvis's Repeating Barrage became involved. Anders only managed to assemble enough blockers via Boneyard Parley, which yielded two. The following block, however, failed to put a stop to the Hammerskull's advances. Instead, Anders was two-for-one'd via Slash of Talons ...

Things took a while to end, but once Purvis had an eighth land and began recurring Repeating Barrage, the actual kill was a mere formality. 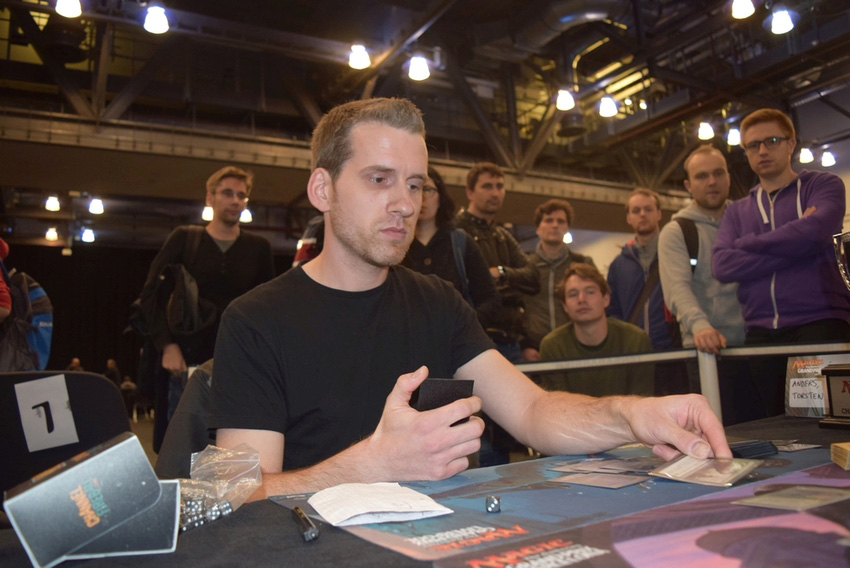 For the second game, Purvis's deck simply decided not to cooperate. He again got his Raptor Companion vanquished. but then made some headway with another Dinosaur carrying Cobbled Wings and Pirate's Cutlass.

Eventually, Anders assembled an army large enough to race the newly-winged Dino though. His biggest hitter was a splahed Belligerent Brontodon, summoned off of treasure, whereas Purvis had trouble casting any further spell at all. His flood forced a decider. 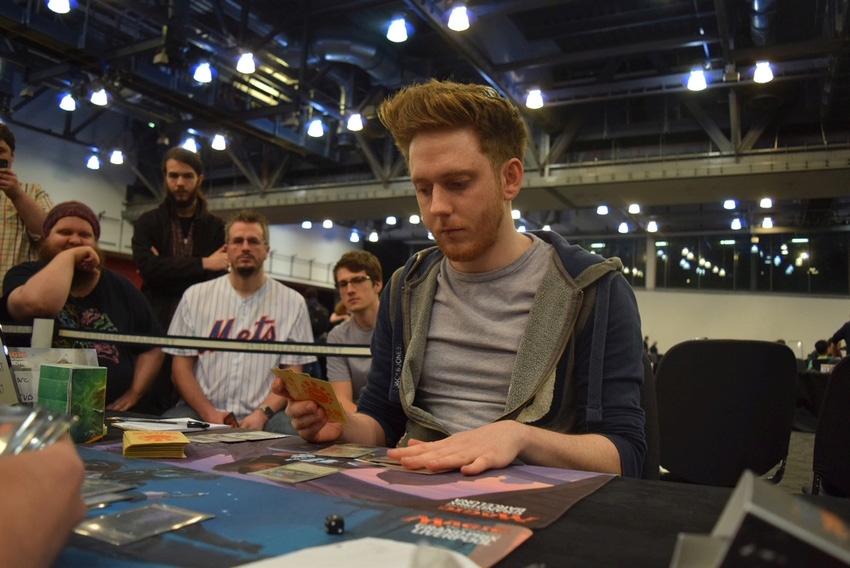 Here, Purvis opened strong: on Sky Terror, Queen's Commission, and Raptor Companion. Anders managed to trade off most of them and he almost looked to be in a position to stabilize: with Looming Altisaur and Dark Nourishment.

But Purvis only doubled down, increased his efforts. Raptor Companion again took to the air via Cobbled Wings and Territorial Hammerskull gave Purvis yet another evasive blocker. Anders may have gotten back into the game with one of his high-end cards yet, but a pair of Storm Fleet Arsonists by Purvis squashed this hope as well.

"Three times!" said Anders accusingly. "Three times we've played this weekend now. And I didn't win a single match," he added with a smile and shook Purvis's hand, the first of many to congratulate Purvis on becoming champion of Grand Prix Liverpool 2017!