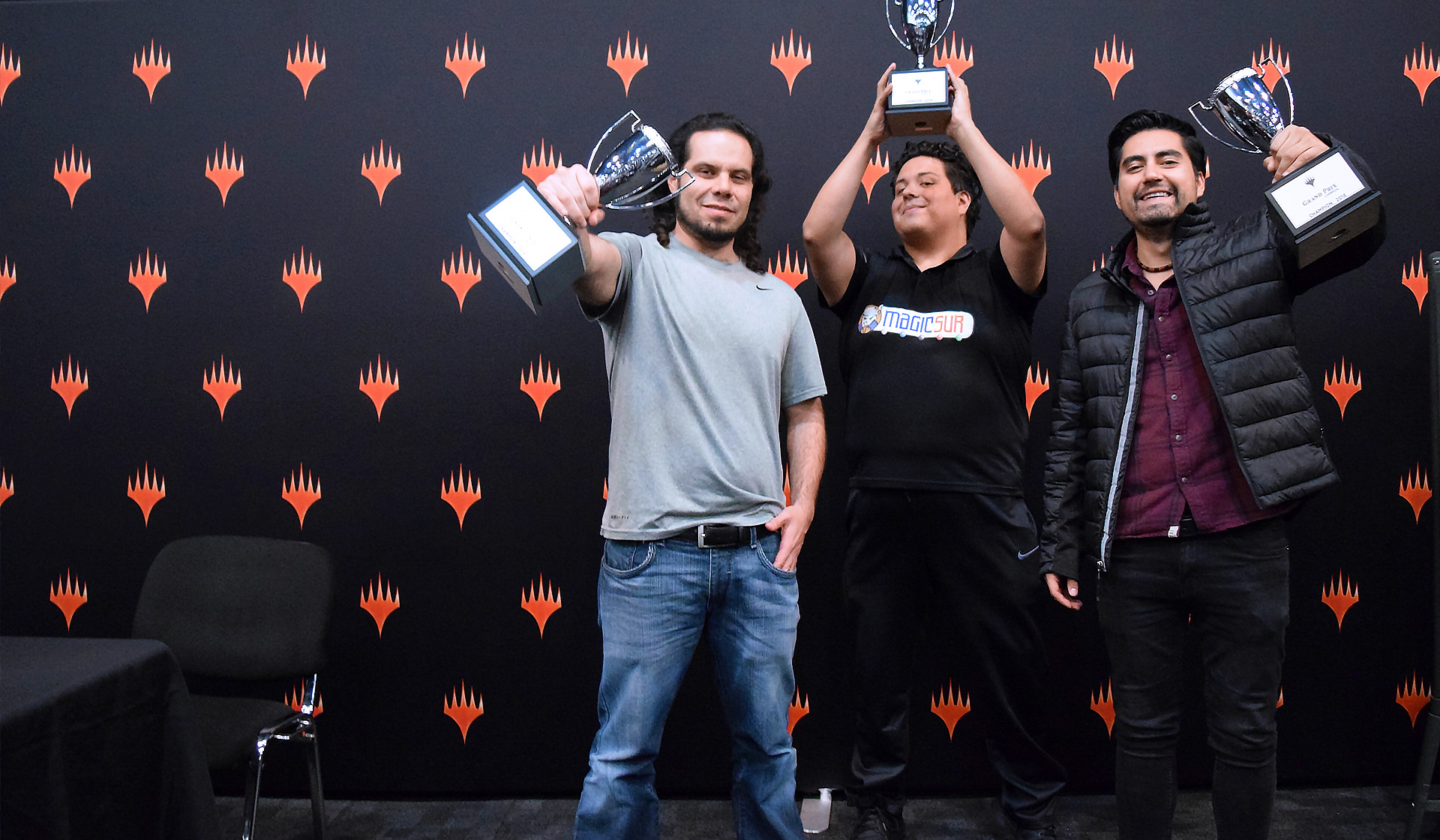 On their way to the upcoming World Magic Cup, Mexico's national team made a stop in Liverpool and finished first in Modern playing Death's Shadow, Bogles, and Ironworks!

The Mexican trio of Dagoberto Silva, Marcelino Freeman, and Daniel Becerra was high on our list of notable teams right from the start. These three decided to make a stop in Liverpool before traveling on to Barcelona for the World Magic Cup where they'd represent their home country in the battle of 74 national teams a week later.

Team Unified Modern drew big crowds and big names all around of course, and Team Mexico was but one of 504 teams initially. Then, after the Day 2 cut, they were one of 67 teams. Then they were one of four teams to make it to the playoffs, along with three squads from Spain. And finally, it was their turn to hoist the trophies, the second for team captain Marcelino Freeman and a good omen for things to come.

The Grand Prix returned to the Merseyside as 504 teams of three showed up to battle it out over a weekend of Team Unified Modern. We also had a few more on top eager to play side events with the...

After fourteen rounds, with a total of 500 other teams eliminated, only four trios remained in the running for the fame and the fortune, the titles and the trophies. Find out more about these...

After fourteen rounds, with a total of 500 other teams eliminated, only four trios remained in the running for the fame and the fortune, the titles and the trophies. Check out their Team Unified...

The following decks' pilots didn't make it all the way to the absolute pinnacle of the tournament, the Top 4 playoffs. But they came close. In fact, all of these teams missed the cut by a single...

Out of 504 teams, only two trios managed to win all of their rounds on Saturday: Francisco Sanchez, Mattia Rizzi, and Cristian Ortiz, as well as Niels Molle, Piotr Głogowski, and Joao Choca...

504 teams, 1,512 players, came to Liverpool to show their mastery of Modern. After the first day's eight rounds, only 67 teams remained in the running. Leading the charge into Sunday were Francisco Sanchez, Mattia Rizzi, and Cristian Ortiz, as well as Niels Molle, Piotr Głogowski, and Joao Choca.

These six would have a head start over the competition on Day 2, but said competition was fierce. The team of Thiago Rodrigues, Eduardo Sajgalik, and Jérémy Dezani, as well as Ondřej Stráský, Alexander Hayne, and Jason Chung, to drop but a few big names, all managed to go 7-1.

With a cast like that and spells being cast as typical for Modern, this promised another exciting and entertaining day. Join us then for all the latest and all the action, straight from the battlefield of Grand Prix Liverpool 2018!

Magic returned to the ACC on the King's Dock in Liverpool for the second year in a row. In 2017 it was all about the Dinosaurs and Pirates of Ixalan limited. For the 2018 Grand Prix, the most...