1,979 players from all around the world entered Day One of the Grand Prix London main event to show off their Ixalan Block Limited skills. This morning, all competitors sat down to build a Sealed Deck from two boosters of Ixalan and four boosters of Rivals of Ixalan. 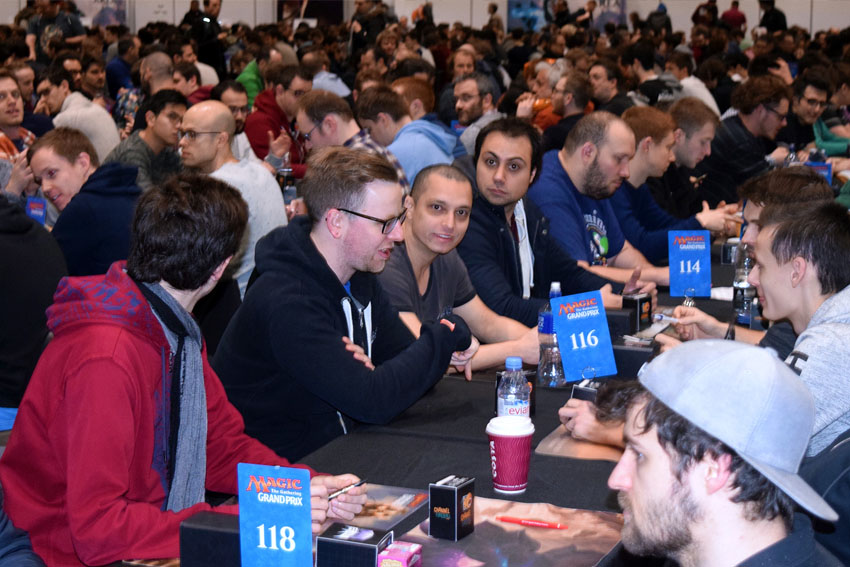 After battling through 8 rounds of Swiss competition, the Day 2 cutoff took place, and 415 players reached the minimum of 18 match points (6-2 or better) required to advance. The players who made the cut then played a ninth round with their sealed decks before heading back to prepare for tomorrow's Rivals-Rivals-Ixalan draft.

Let's dive into the stories that stood out from Saturday. 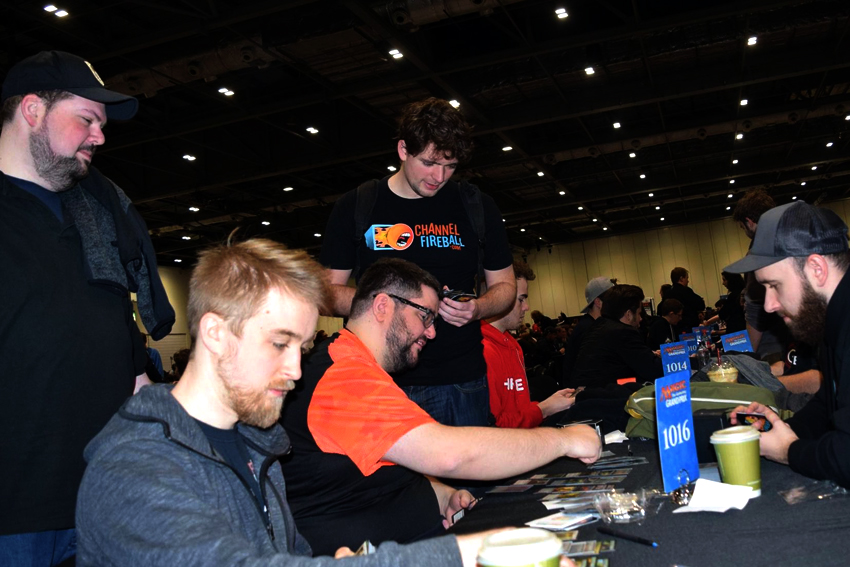 The pros in the wild.

The player list of the main event featured an abundance of pros, many of whom flew in to Europe early to get some high-level Limited practice before next week's big event: Pro Tour Rivals of Ixalan in Bilbao, Spain. Whereas a typical European Grand Prix might collect 15 Gold and Platinum pros, this weekend the number of 3-bye players reached 60! With this incredible amount, the top tables were filled with talent. 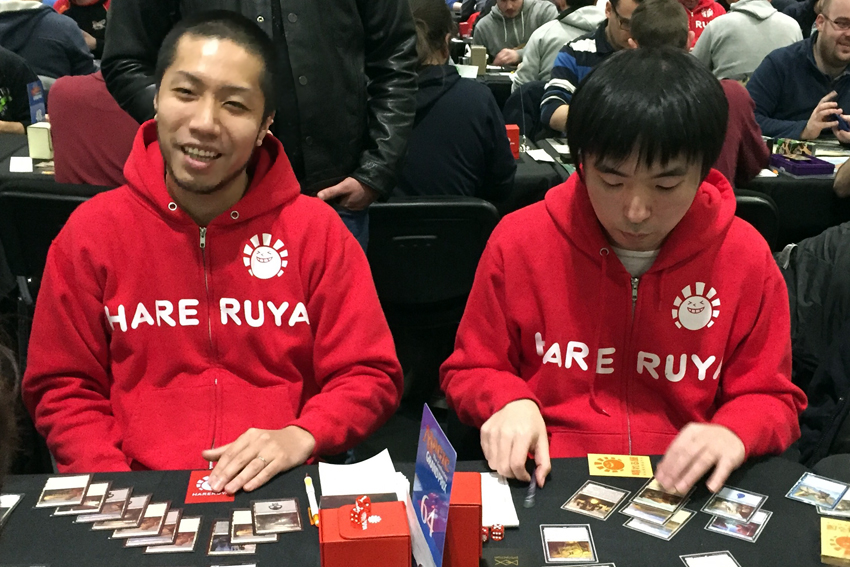 The Round 5 pairings put Tomoharu Saito and Shuhei Nakamura next to each other with matching hoodies.

The drafts tomorrow were going to be hard, but players didn't mind. "It's good; I'm mostly here to prepare for the PT," Gold pro Grzegorz Kowalski told me, and his view was shared by most. The pros relished the competition and appreciated the opportunity to flex their Limited muscles. And most of them were enjoying the new Limited format.

Several pros, including Kowalski, told me that the addition of Rivals of Ixalan made the games more fun to play and more skill rewarding. A variety of reasons backed up this assessment: 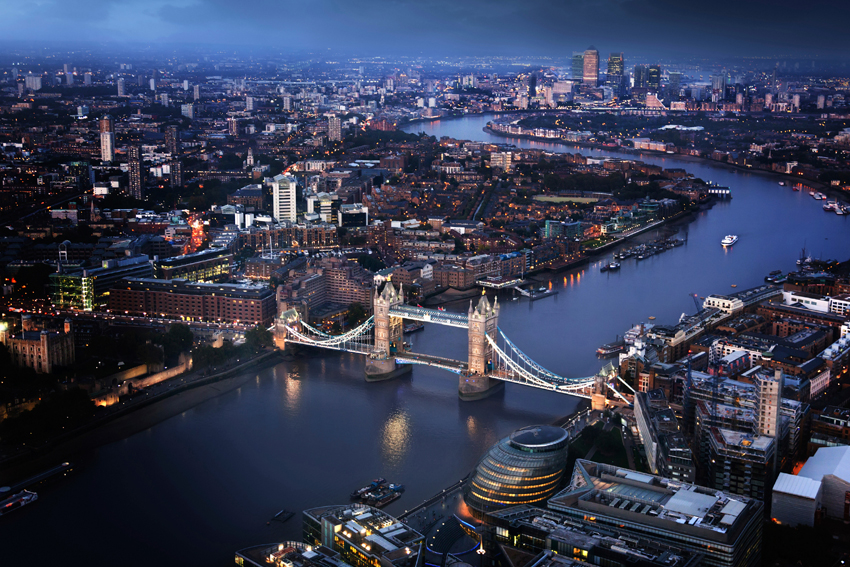 London, the capital of England and the United Kingdom, has a storied history stretching back to Roman times. Presently it's the home of the Thames River, Buckingham Palace, the Big Ben, and various other iconic locations. What's more, the local Magic community is exceptional.

Everywhere I've been has had a great Magic player/fan base, but a few places have been truly exceptional. London is absolutely one of those places. Met so many awesome people here and it's still early! #GPLONDON

With all this in mind, receiving the city's blessing in London is all the more special!

Rivals of Ixalan contains 23 cards in total with the new ascend keyword, five of which are common. Although the cards grant different bonuses when you clinch the city's blessing, they are all quite potent in the right deck. "I think all the ascend cards are good," Seth Manfield said. Well, it's hard to argue with a stamp of approval by the number one ranked player in the world.

But how quickly can you get the city's blessing? The consensus among pros was that achieving ascend should be possible in the large majority of games. "It's very easy," Pierre Dagen said. "If you want to play a deck around it, you should consistently have it by turn 6, and it's not unlikely to have it by turn 5." Gold Josh Cho agreed: "Between Treasures and random token makers, it's a lot easier than I thought it would be."

Their beliefs echo the games we saw on stream. In Round 2, we saw multiple turn-5 ascensions, confirming the early claims. Although I fully expected that the ascend record for the day would stay at a turn 5, Gerry Thompson promptly broke it by ascending as early as turn 4! He needed a land advantage from Wayward Swordtooth and an extra permanent from Deeproot Waters, so it won't be a likely occurrence, but turn-4 ascends can certainly happen. 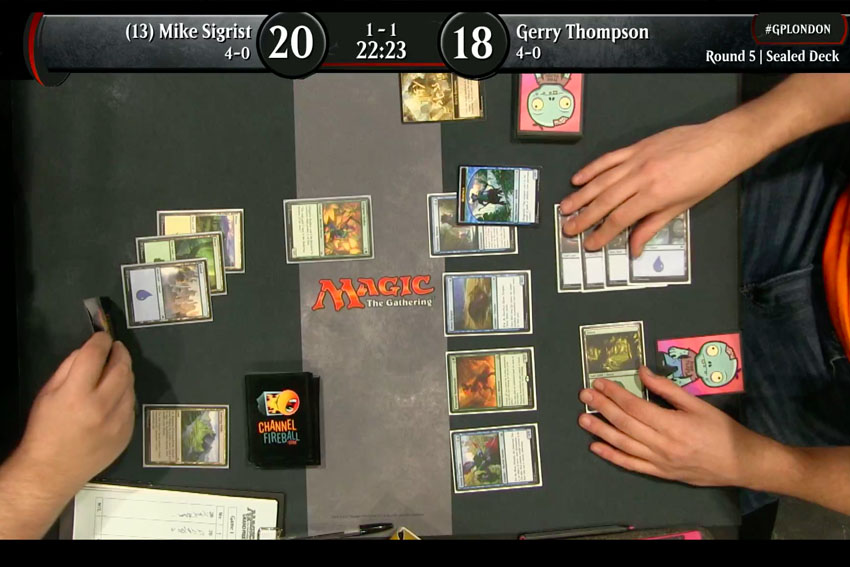 I next wondered which cards would get better in an ascend deck. When I talked to the pros about this, two answers came up more than once: Sailor of Means and Legion Conquistador. Both creatures can be found in every Ixalan Block booster and are excellent at boosting your permanent count. Sailor of Means also helps with your splashes, but it's the 2/2 Vampire that truly stands out.

"I think Legion Conquistador was great before; now, if you have three of them, it's at least as good as having a missing bomb in your deck," Pierre Dagen told me. What's more, since Rivals of Ixalan is a small set, Legion Conquistador shows up more frequently—3.08 copies on average in a Rivals-Rivals-Ixalan draft, up from 2.38 in triple Ixalan. So decks with three copies are both powerful and possible!

The Grand Prix is not only for the participants of the main event. There are side events in all kinds of formats, artists and content creators who are happy to give their autograph, and vendors to fulfill your every Magic: the Gathering need. A a Grand Prix is essentially a celebration of all things Magic, from casual to competitive. A group of UK-based content creators even organized a treasure hunt where the first person to collect a set of tokens would receive a special playmat as a prize.

But we'll never get tired of seeing great cosplays, especially when they are guarding the most precious prize of them all: the GP London 2018 champion trophy! 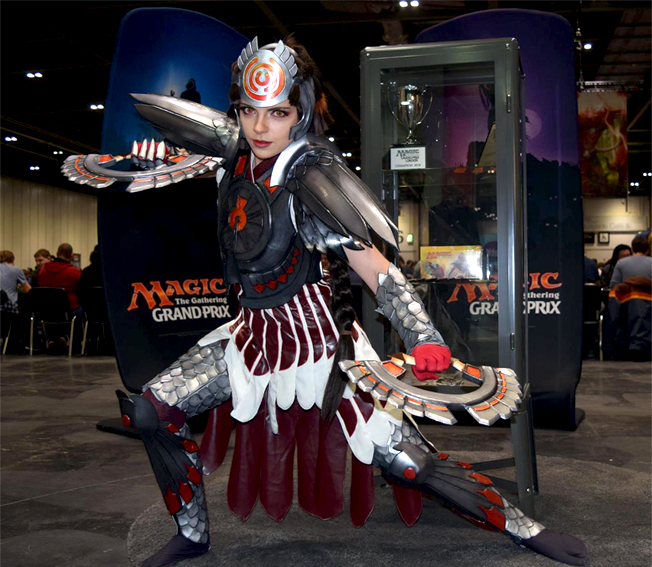 It would have been particularly fitting if Nadine Grendelmeier would have been able to hoist the trophy that she guarded so well at the end of the tournament, but despite a 3-0 start she was unable to advance to Day 2. Still, Huatli would surely unleash a Dinosaur stampede on anyone who would dare to steal the trophy.

We got to watch plenty of good games on stream today, with the commentators dressed for the occasion.

A number of sweet plays and memorable moments stood out.

In Round 2, Stephen Murray showed that with ascend, Ruthless Knave gets all the more potent. After all, it can level up your number of permanents to grant the city's blessing at instant speed, yielding a nice on-board combat trick.

In Round 3, Hannes Kerem found a nice use for his pump spell by targeting…his opponent's creature? You don't make such a play every day, but an opponent who is trying to transform Golden Guardian is a perfectly good reason.

In Round 6, Gold level pro Simon Nielsen got to live the dream of attacking with a 9-power Gishath, Sun's Avatar. As commentator Tim Willoughby said: "Alright, we have a Dinosaur with a sword. This is an emergency situation we find ourselves in here!" We're not quite sure how the Dinosaur was able to carry the sword—maybe in its mouth?—but the boosted damage trigger netted a Rampaging Ferocidon and a Sun-Crested Pterodon for free. Not a bad catch.

In Round 7, not just one player boarded into completely a different deck—both players did. When commentator Riley Knight realized this, he just burst out laughing. After all, it's not an uncommon occurrence to see a color switch (perhaps based on a realization that there was a better build for your sealed pool in general or against your opponent's deck) but it's quite unusual to see both players make a switch.

The final funny moment I'd like to share is Christian Menendez reaction after beating Paulo Vitor Damo Da Rosa in their battle for Day 2. Advancing to the Sunday competition is an accomplishment in and of itself, but beating the 2017 Player of the Year to get there makes it feel like an even bigger triumph.

Eight players reached the end of Day One with undefeated 9-0 records. They would have a head start going into tomorrow, but hot on their heels were a group of veterans including Hall of Famer Shuhei Nakamura and No. 1 ranked Seth Manfield at 8-1. Hey, I told you the field was stacked. To learn a bit more about the eight 9-0 players and their decks, check out their profiles below! 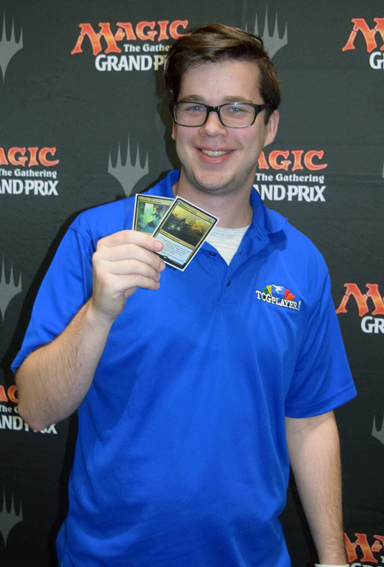 Sealed Deck colors: Green-Blue. I sided in red for Fiery Cannonade and Raging Swordtooth against Vampires or Merfolk.

Which card(s) in your Sealed Deck performed the best? Winged Temple of Orazca, Crested Herdcaller, and Hunt the Weak

Which was the most exciting/close/cool game you played today? N/A 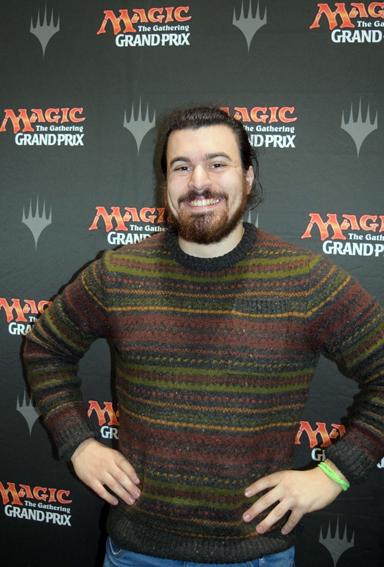 Sealed Deck colors: White-Red splashing black for Angrath, the Flame-Chained and Profane Procession. I often switched a couple of cards after Game 1 depending on the opponent's deck; Mutiny came in a lot.

Which card(s) in your Sealed Deck performed the best? Good old Burning Sun's Avatar was insane. And the splash cards as well…nothing new here!

Which was the most exciting/close/cool game you played today? Game 3 against Ben Seck was pretty exciting. It was very close and I topdecked Tilonalli's Crown for the win. 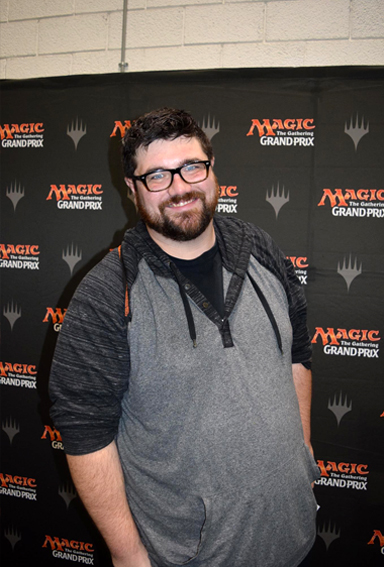 Which card(s) in your Sealed Deck performed the best? Golden Demise and Immortal Sun.

Which was the most exciting/close/cool game you played today? My Immortal Sun versus his Tetzimoc, Primal Death. That Dino may be old, but nothing outlasts the big flaming ball in the sky! 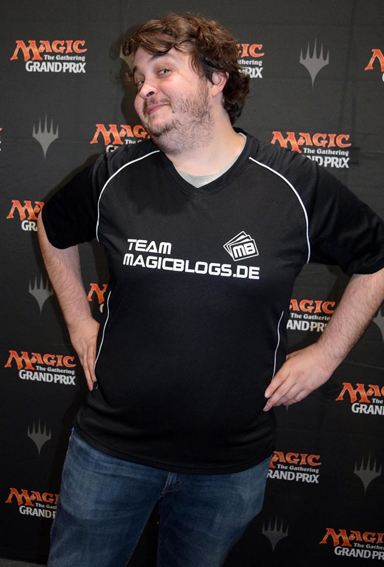 Which card(s) in your Sealed Deck performed the best? Pride of Conquerors.

Which was the most exciting/close/cool game you played today? Tilonalli's Summoner into Pride of Conquerors. 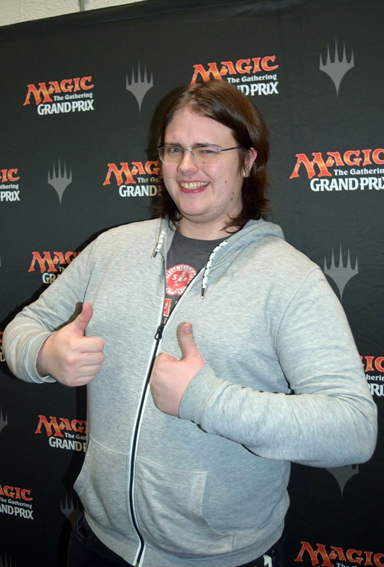 Which was the most exciting/close/cool game you played today? Against Blue-Red Pirates, I lost Game 1 and got beat down to 1 life in Game 2. But Procession stabilized the board and eventually sealed the deal. 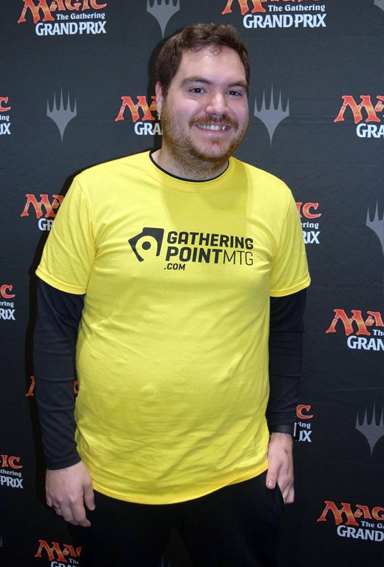 Which card(s) in your Sealed Deck performed the best? Journey to Eternity and Waker of the Wilds.

Which was the most exciting/close/cool game you played today? The last match. I had to 3-for-1 myself to flip Journey to Eternity. 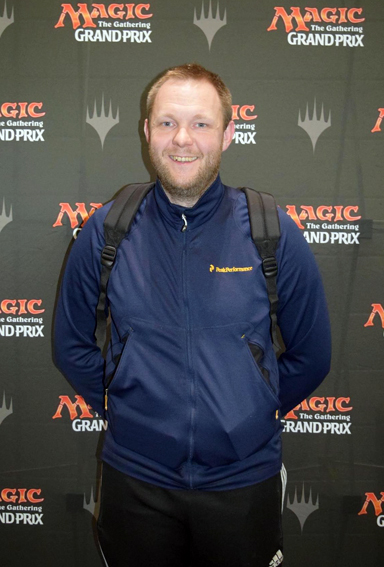 Which card(s) in your Sealed Deck performed the best? Profane Procession.

Which was the most exciting/close/cool game you played today? Last round, I went to extra time and won with 0 cards in my deck. 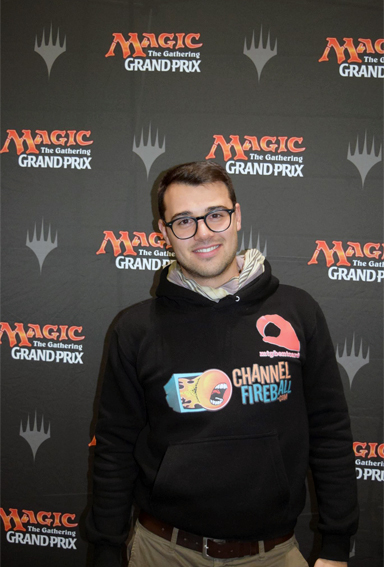 Which card(s) in your Sealed Deck performed the best? Rekindling Phoenix was the real bomb, but the MVP was Colossal Dreadmaw.

Which was the most exciting/close/cool game you played today? In the last game, on the draw, I kept a one-lander on 6 cards and curved out perfectly from turn 2 till turn 6, drawing lands every time.

Congratulations to all 9-0 players! Tomorrow morning, the eight of them will constitute Draft Pod number 1. The Sunday stream on twitch.tv/magic starts at 1 a.m. PT/4 a.m. ET/9 a.m. UTC.