There were plenty of great moments, decks, and stories over the course of the weekend here in London. You can read all about the new Sealed Deck format, sweet plays, great cosplay, and Saturday's undefeated player profiles in the Day 1 highlights. But today was even more spectacular.

A DINOSAUR STAMPEDE OF PROS DESCENDED UPON LONDON

The main event featured an abundance of pros, many of whom flew in to Europe early to get some high-level Limited practice before next week's big event: Pro Tour Rivals of Ixalan in Bilbao. As many as 60 players with three byes competed in the main event—an incredible amount—and the top tables were filled with talent. 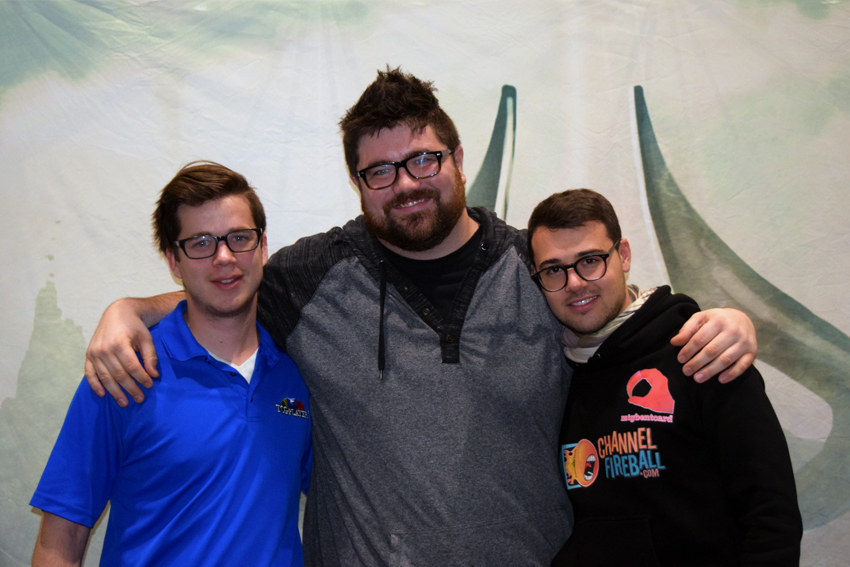 After Day 1, three members of the Top 25 were undefeated: (21) Steve Rubin, (12) Brad Nelson, and (22) Andrea Mengucci. They then proceeded to score the maximum of seven wins between them in the first draft.

However, only two of the three did well enough in the second draft to advance to the Top 8. The one who missed out was Andrea Mengucci, who is still cursed at the Grand Prix Level. Despite having two Pro Tour Top 8s and a World Magic Cup trophy to his name and coming really close this weekend, his Grand Prix Top 8 counter remained stuck at zero. Better luck next time!

Brad Nelson is a familiar face, but his last 11 Grand Prix Top 8s were all in Standard. Known more for his Constructed prowess than his Limited skills, Nelson described being the feature 9-0 drafter as a "nightmare coming true." Even after reaching 11-0, he could only think about his last Grand Prix in London, where he also started 11-0 before losing the next four straight.

This weekend, however, Nelson finally got the monkey off his back. But according to him, he couldn't have done it alone—not without his Genesis teammates. "We met on Tuesday and did about 15 live drafts. The live drafts are so much better than Magic Online drafts." As Nelson explained, Genesis had a terrible draft record at the last Pro Tour, and they made sure to amend that by focusing mostly on Limited this time. 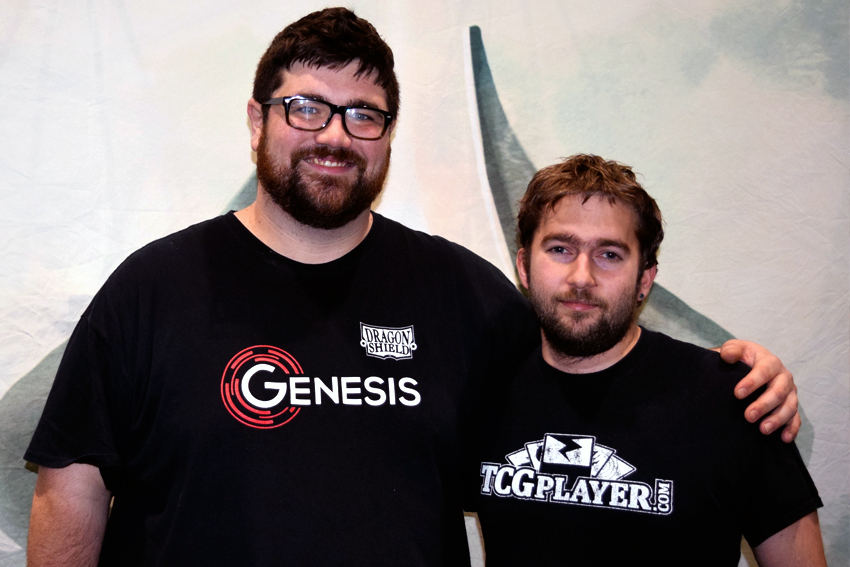 Their testing regime worked out well, as Nelson was joined by Genesis teammate and No. 1 ranked player Seth Manfield in the Top 8. For Manfield, by the way, this weekend marked his third Grand Prix Top 8 since…you know, winning the last Pro Tour. He's the number one for a reason!

MAGIC ACTION ON STREAM ALL DAY

This weekend marked the first individual Limited Grand Prix run by ChannelFireball Events, and coverage manager Rich Hagon dialed the record button to the max by streaming 10 full drafts over the course of Day Two. If you want to get better at Rivals of Ixalan Limited, check out the Day 2 archive on Twitch to draft along with the pros, commentated by some of the best in the business.

There were plenty of memorable moments from the matches in the Swiss. Here's a quick glimpse.

When it comes to decks drafted at the featured draft tables, my favorite was Steve Rubin's Grixis Pirate deck from the second draft. 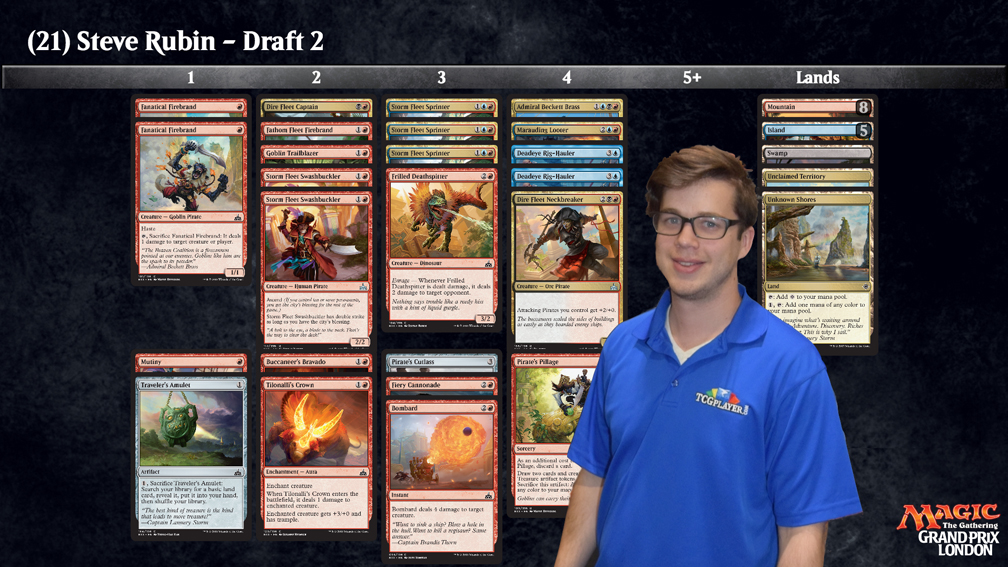 With the perfect draw and no opposition, his deck was capable of a turn four kill, which is just absurd for Limited. There were even multiple ways to get there—combining Dire Fleet Neckbreaker and Storm Fleet Swashbuckler was one route; pairing Tilonalli's Crown with Buccaneer's Bravado was another.

The individual power level of Rubin’s creatures was also off the charts, as he had pretty much every multicolor Pirate in existence, supported by mana fixing in Unclaimed Territory. Rubin went 2-1 with this deck, locking up his Top 8 berth.

Moving beyond the streamed drafts, three other decks stood out. 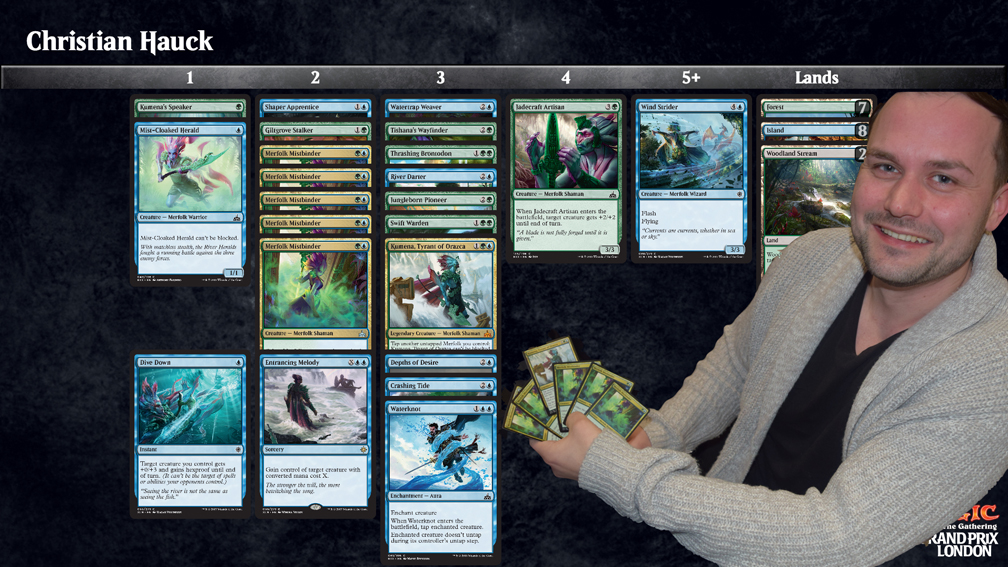 A lot of Merfolk decks were drafted all weekend, but it was hard to top Pro Tour Ixalan Top 8 competitor Christian Hauck's quintuple Merfolk Mistbinder deck. 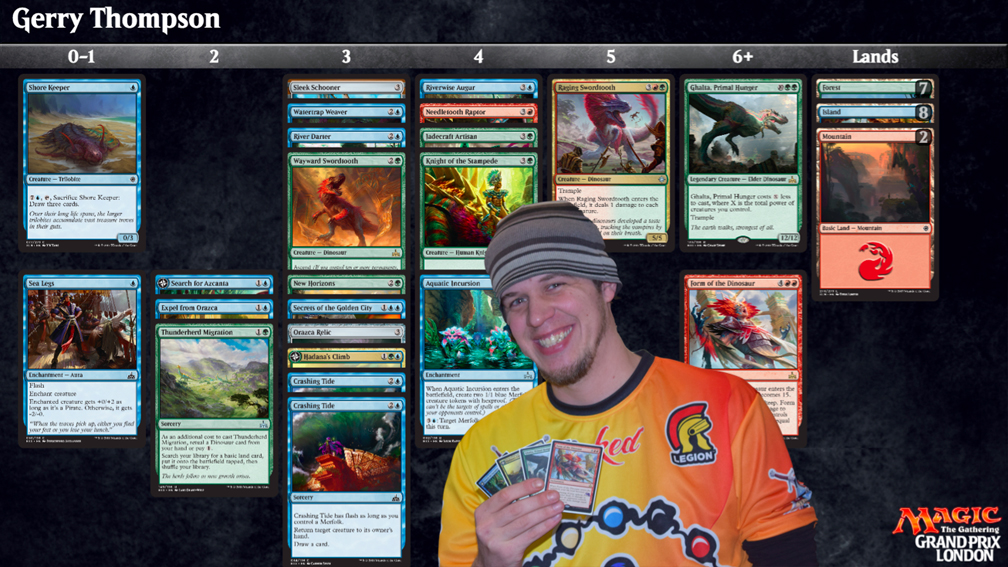 The next deck of note was drafted by Pro Tour Amonkhet champion Gerry Thompson. His three-color Dinosaur brew opted for ramp spells over aggressive two-drops and splashed a double-red red card for the ability to turn into a Dinosaur. "I like Form of the Dinosaur," he told me with a smile.

Although the enchantment forces you to fight every turn, it buffers your life total and can secure a quick win. It's useful to keep in mind that you can use life gain or bounce/removal in response to the ability to avoid dying. Thompson went 3-0 with his deck, confirming that slower decks built around game-winning bombs can also find success in this format. 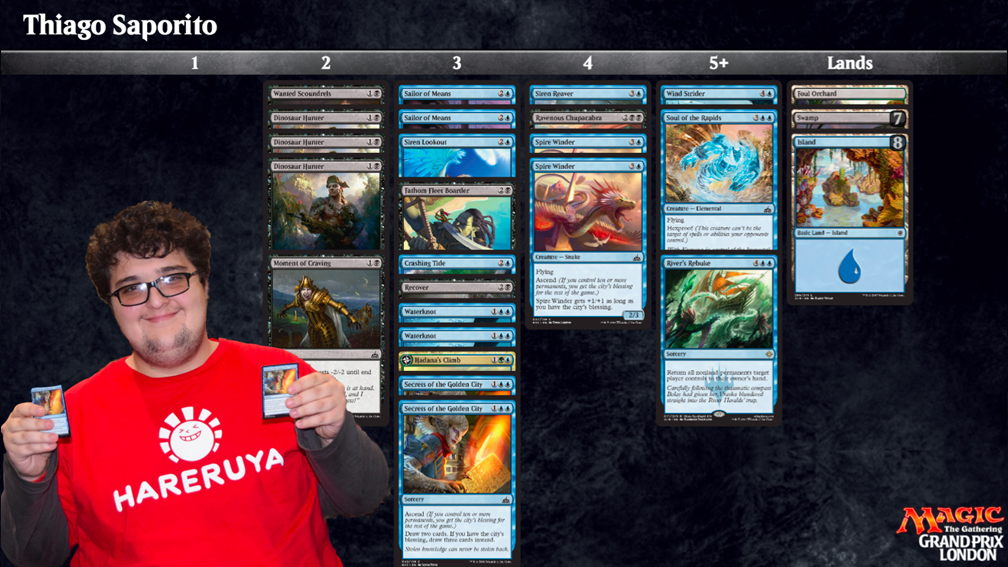 Rivals of Ixalan introduced a new mechanic in ascend, and the players who knew how to draft and build around the city's blessing often got the best draft decks. Among that group was Thiago Saporito. The Platinum pro from Brazil had already scored 23 trophies on the Rivals-Rivals-Ixalan draft league on Magic Online, and he added his 24th with his 3-0 in the first draft of Grand Prix London.

So what's Saporito's secret to the format? "The secret is actually...the Secret!" he told me. "It's better than it looks. I really like ascend; you can get the city's blessing on turn five or six almost every game." His first draft deck had two copies of the sorcery along with two Spire Winder as additional payoff cards for the city's blessing, yielding a good example of a 3-0 ascend deck.

In these highlight pieces, we tend to focus mostly on the main event where the big prizes and the Pro Tour qualifications are given out. But from Friday afternoon till Sunday evening, the hall was abuzz with action, and the side events received huge turnouts.

The first memorable one was on Friday evening: A horde of 170 players competed in the Bounty Event, a three-round Sealed Deck Event where pro players enter with a bounty on their heads. Participants who get paired against one of these bounty players and win the match receive extra Prize Tix to commemorate their victory.

But the really big events took place on Sunday.

(trixobird) welcome to Sunday of #GpLondon where the grass is green and PTQs reach their cap of 512 players :) pic.twitter.com/m1S4AT2CRt

We're in the middle of the biggest pauper event IN THE WORLD here at #GPLondon, 302 players, including @TolarianCollege who received a standing ovation! pic.twitter.com/ipnTExaLNd

Pauper in particular got massive crowds and is on the rise as a format. The barrier to entry is low, the power level is high, and the competitors had a chance to be paired against The Professor from Tolarian Community College, who shared his love for the format with me: "Pauper is Legacy light. You get to play some of the best cards from Magic's history: Lightning Bolt, Counterspell, Daze. And there's a deck for every play style!"

The finals featured two of the most interesting decks from the star-studded Top 8.

On one side of the table, Marcelino Freeman went for an all-in aggressive approach: he drafted a 15-land deck whose creature base featured 4 Grasping Scoundrel and 3 Fathom Fleet Boarder, and he was trying to overwhelm the opponents quickly. He had already defeated two U.S. Gold and Platinum pros—Mark Jacobson in the quarterfinals and Seth Manfield in the finals—so he wasn't afraid to face another American Platinum pro in the finals.

Steve Rubin, on the other side of the table, had a slower deck with an incredible top-end featuring everyone's favorite Forerunner of the Empire / Polyraptor combo. If he could stabilize and assemble the combo, a herd of 8 Polyraptors would surely secure the late game.

In Game 1, Freeman was on the play, and he raced out of the gates quickly with turn one Grasping Scroundrel, turn two Dinosaur Hunter, turn three Crashing Tide, and turn four Captain's Hook. Rubin was too slow to set up. His Crested Herdcaller stabilized for a bit, but his Dinosaurs were ultimately unable to turn the corner because Captain's Hook turned all of Freeman’s deck scrubbers into menacing captains.

In Game 2, Rubin ramped into a turn-four Raging Swordtooth, which killed Grasping Scoundrel and immediately stabilized the board. Freeman was now unable to attack and quickly fell behind. But Rubin’s 19 mana source deck flooded out, while Freeman’s 15 land deck kept on providing spells. Eventually, Freeman rebuilt his board and used the temporary advantages provided by Crashing Tide and Deadeye Rig-Hauler to put Rubin down to 5 life. Rubin, who was holding Plummet, then had to tap out to add enough blockers, giving Freeman the opportunity to resolve One With the Wind for the win.

His flyer soared in for the final points of damage to take the match, the trophy, $10,000, and the cheers from his Mexican compatriots who were watching the match. The one-drop strategy can work! 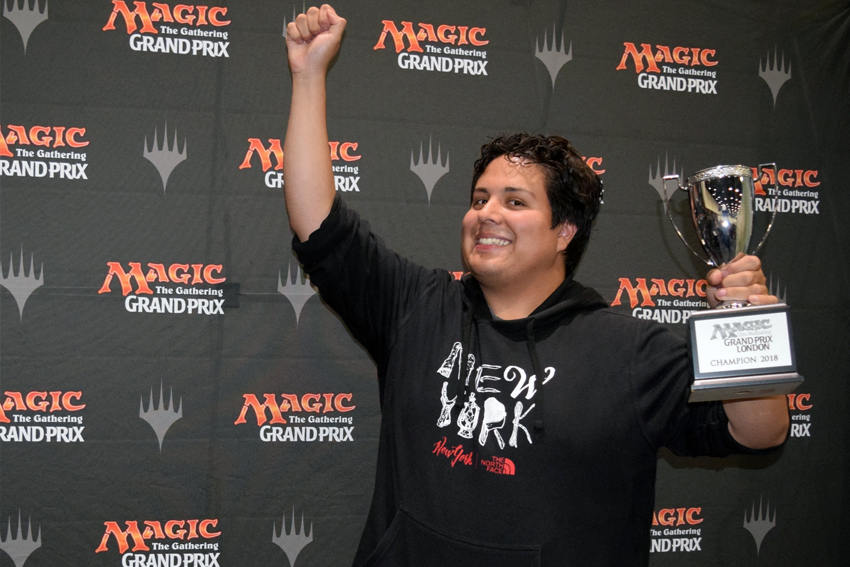