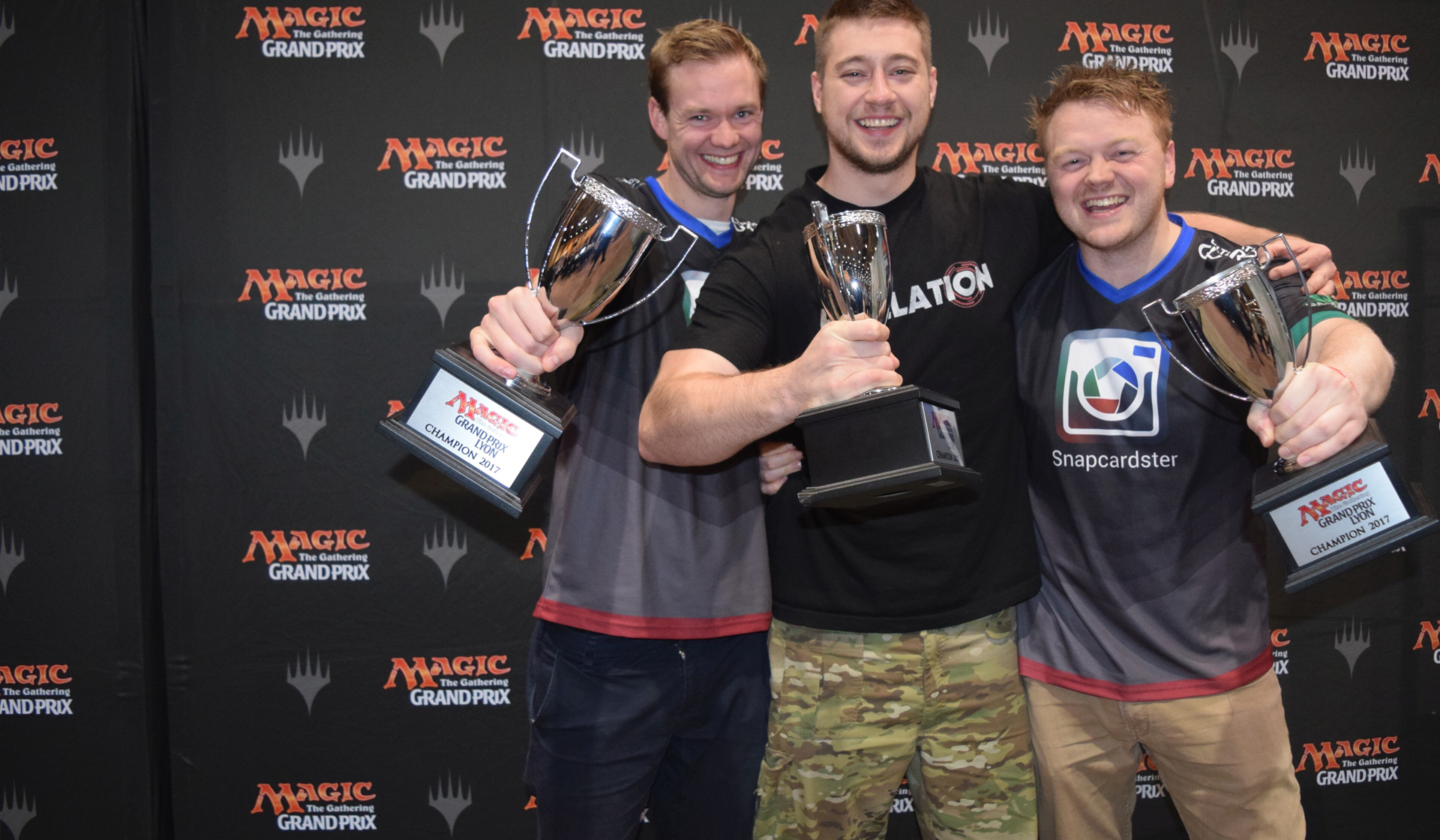 THE HASHTAG FOR GRAND PRIX LYON IS #GPLYON. JOIN THE CONVERSATION.

With the World Magic Cup just a few days and a couple of hundred kilometers away, Grand Prix Lyon drew an especially large number of excellent teams from all over the world, while the popularity of Team Limited continued to bring out lots of big names from Magic's storied past. For instance, eighteen Pro Tour champions were in attendance this weekend, most notably seven-time winner Kai Budde.

With a whopping 631 teams vying for just four spots in the playoffs, Rich Hagon predicted a massacre and a massacre it was. One of the first teams to fall was the trio of Ken Yukuhiro, Tomoharu Saito, and Jérémy Dezani who came all the way from Japan only to drop after seven rounds. 485 other teams also missed the cut for Day 2. In Round 11, Budde and teammates were eliminated from Top 4 contention, and in Round 12 the 2017 Japanese national team of (12) Yuuya Watanabe, Kenta Harane, and (11) Shota Yasooka followed.

Through it all, one team managed to stay the course however, despite a rough 0-2 start into the tournament: Thomas Enevoldsen, Christoffer Larsen, and Michael Bonde entered the playoffs as the most accomplished of the four teams, playing in their third, eighth, and third GP Top 8, respectively. They needed fourteen consecutive match wins to claim the trophies, and fourteen consecutive match wins was what they got.

In the end, it came down to an all-Danish finals showdown. It began with more than 600 teams – almost 2,000 players – turned out to compete in Grand Prix Lyon, and players took their final...

After fourteen rounds of Swiss and one round of playoffs, with a total of 629 others eliminated, only two teams remained in the running for the fame and the fortune, the titles and the trophies....

After fourteen rounds, with a total of 627 others eliminated, only four teams of three remained in the running for the fame and the fortune, the titles and the trophies. Find out more about these...

What had started with 631 teams in the morning was reduced to 146 by day's end. Leading the charge was one trio at 9-0: Magic Online grinder Mats Ellingsen, two-time GP Top 8er Sveinung Bjørnerud, and Andreas Ganz, champion of Grand Prix Charlotte 2016!

These three would have a head start on Sunday. But tough competition wasn't far behind, as the event drew more than the usual share of globetrotters in the run-up to next week's World Magic Cup. Just looking at the teams at 8-1, there were the 2007 Team World Champions Nico Bohny and Christoph Huber; there were last year's WMC finalists Branco Neirynck, Peter Vieren, and Pascal Vieren; there was Pro Tour champion Geoffrey Siron; there were the champions of Grand Prix Barcelona 2014 Tobias Gräfensteiner, Daniel Gräfensteiner, and Christian Seibold; there were this year's Austrian national teammates Oliver Polak-Rottmann and Adrian Schrenk, playing with World Championship 2009 finalist David Reitbauer …

So tune back in tomorrow for exciting matches with some of the games greatest stars, for news and updates straight from the battlefield, and for the epic conclusion of Grand Prix Lyon 2017!

More than 600 teams – almost 2,000 players – turned out to compete in Grand Prix Lyon, and players took their final shot at Ixalan Sealed Deck as the clock to next week's World Magic Cup ticks...