More than 600 teams – almost 2,000 players – turned out to compete in Grand Prix Lyon, and players took their final shot at Ixalan Sealed Deck as the clock to next week's World Magic Cup ticks down. And with plenty of WMC teams in attendance at Lyon (at least 13 of them), there was plenty of the line as players squared off.

Here are the highlights that stood out from Day One of Grand Prix Lyon.

National Teams Get a Head Start

There were plenty of big names in attendance in Lyon, and plenty of teams of superstar players – headlined by the powerhouse team of No. 2 Reid Duke (the U.S. National Team captain), Pro Tour Avacyn Restored champion and 22nd-ranked Alexander Hayne and Hall of Famer Ben Stark. They may not have been a national team, but they were certainly the trio in the room that turned the most heads – not least of all because it was a rare non-Peach Garden Oath appearance for Duke, who was without his regular teammates Owen Turtenwald and William “Huey” Jensen. 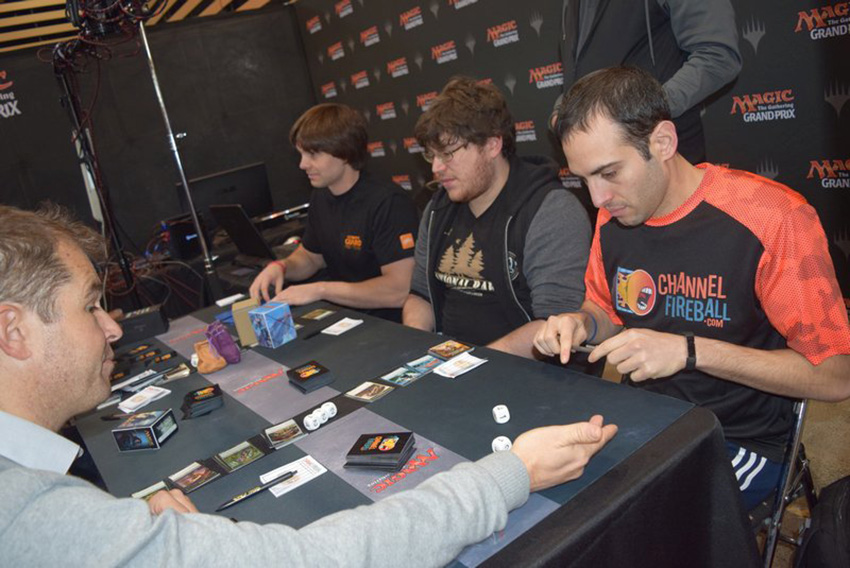 As part of Peach Garden Oath, Duke has somewhat of a lock on a Top 4 berth back in North America but will find that success hard to replicate after dropping to just a 6-3 finish in France.

Other World Magic Cup competitors showed up to the event ready to get a head start on next weekend. Among the top teams competing was the superstar Japanese squad of Yuuya Watanabe, Shota Yasooka and Kenta Harane. With two Hall of Famers on the team, Japan heads into next week’s tournament as one of the favorites, though some growing pains were evident in Lyon thanks to a 6-2-1 finish on Day One.

Two national teams that didn’t struggle were Chinese Taipei and Thailand. Led by Hao-Shan Huang and joined by Cheng Yu Chang and Bo Ruad Chin, Chinese Tapei finished the first day of competition at 7-2, as did Thailand’s national team of Kwanchaitunya Sakditat, Chaovarindr Thirawat and Tantiyanon Chitipat. With so much on the line at next week’s Cup, the strong showing in Lyon is an encouraging sign for both teams. 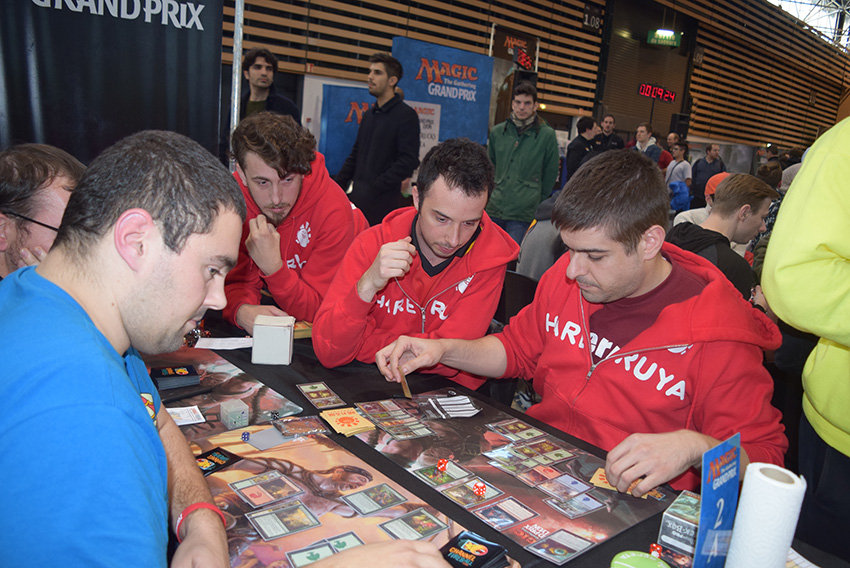 Also in attendance were the defending champions, in a sense. Last year, the weekend before the World Magic Cup was a team Grand Prix that took place in Rotterdam, and it was three World Magic Competitors – if not teammates – who took it down. That honor belonged to Luis Salvatto, Marcio Carvalho and Javier Dominguez, and the trio were back in Europe ready to run it back this year. They got off to a fast 4-0 start but faded down the stretch to finish Saturday with a record of 6-2-1, live for the Top 4 but with their work cut out for them come Sunday.

The Kiefers Team Up… Finally

Fans of the North American Grand Prix circuit are at this point familiar with the Kiefer family. Three brothers ranging in age who are regulars at the GP level – and now sometimes even the Pro Tour as members of Team Cardhoarder – the trio of Quinn, Jack and Lucas is hard to miss.

But there’s one thing they haven’t done yet: play as a team. That all changed in Lyon, as they turned a family vacation to Paris into an extended trip to get in a Grand Prix. All three are veterans of multiple team Grand Prix but, brothers being brothers, they haven’t always worked well enough together to team up for the Kiefer-Kiefer-Kiefer squad. 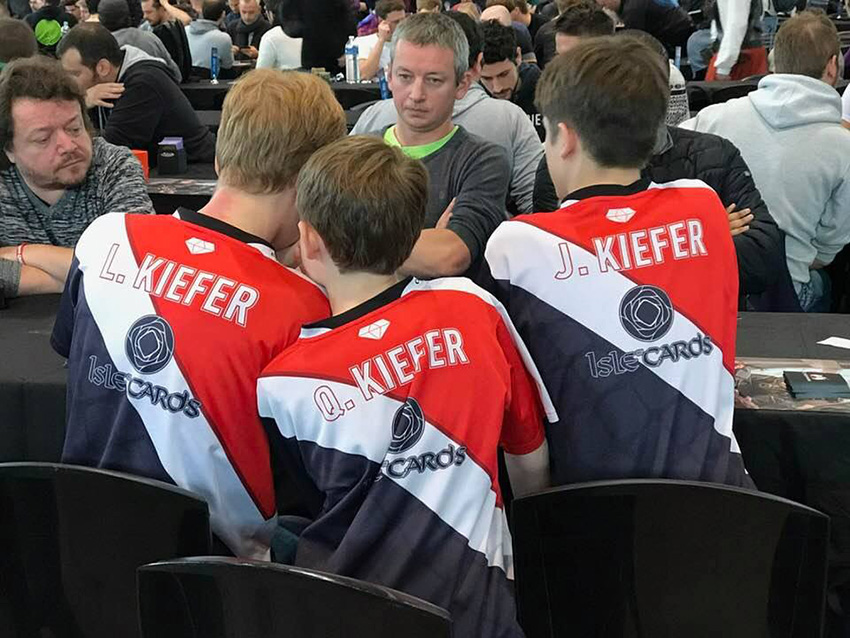 It wasn’t the best event for any of them. The team struggled putting a viable third deck together and late in Day One Lucas – who bit the bullet and piloted the team’s worst deck – had managed only a single game win as the team was off to a sluggish start.

But sometimes Grand Prix are about more than just winning, and flanked by their mom and dad watching from the sidelines, the brothers had to agree that teaming up was a fitting end to a memorable family vacation. 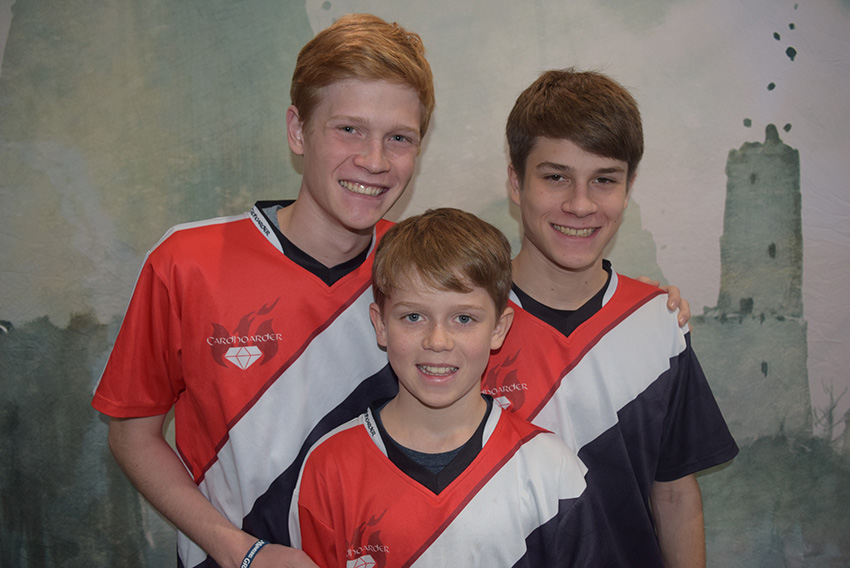 In case you were curious, there have been 106 different players to win a Pro Tour, and historian Brian David-Marshall has been there for most of those. With so many players converging on France this weekend, he decided to track down as many of them as he could.

Little did he know it was going to be such a prospect.

I am on a #GPLyon Pro Tour Champion scavenger hunt this weekend. What % of PT winners will be in attendance?
PT Avacyn Restored @InsayneHayne PT Eldritch Moon @LukasBlohon & PT Columbus @PedroCanali accounted for so far. pic.twitter.com/bt8GqduILs

As he scoured the hall for past Pro Tour winners, the numbers just kept piling up as more and more Pro Tour champions revealed themselves amongst the field. The final count? There were 18 individual Pro Tour winners in attendance at Grand Prix Lyon, nearly 20% of those who have reached the pinnacle of the game. That’s a lot of Magic history represented this weekend.

Of all those past Pro Tour winners in attendance, none stood out more than one man immediately recognizable to anyone who has followed competitive Magic. Nicknamed the “German Juggernaut” early on during a career that has him considered one of the two best players to ever sling a spell, none other than the legendary Kai Budde was found battling in Lyon.

Found 7 more Pro Tour titles for the #GPLyon Pro Tour Champion scavenger hunt but stupid Twitter will only let me share four pictures of them at once. pic.twitter.com/536EWudZCo

Teaming with Antonino De Rosa and Luca Casadei, the team didn’t find much success early as they fell to 1-2 – "self-inflicted losses," as De Rosa put it – but they battled back strong as the day wore on. With the slow start behind them, the team rattled off six wins in a row to finish at 7-2 and in position to make a run at the Top 4.

“I don’t get a chance with work to play in many of these events, but it was a team event in Europe so I was able to make it work," Budde explained happily as he made his way back to the Grand Prix circuit that he made his mark on so many years ago.

Whether he’s running off wins like the old days or just spellslinging at a side event, one thing is for sure – the Magic world is a better place when Kai is playing. 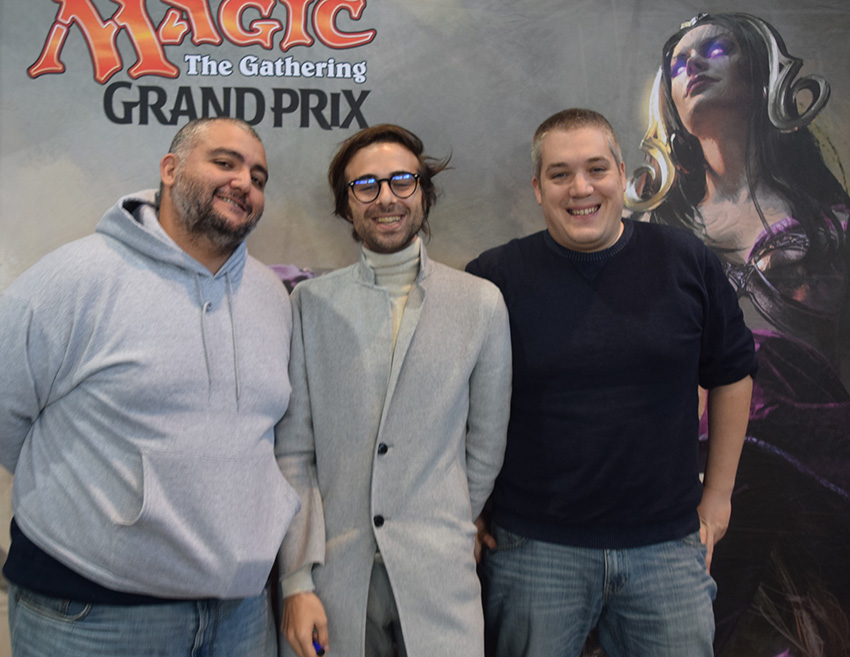 One Team Leads the Way

Almost 2,000 players. More than 600 teams. Nine rounds and a lot of games of Magic. After all that, just one team stood unblemished at the top of the standings.

The team of Mats Ellingsen, Sveinung Bjørnerud and Andreas Ganz finished the day 9-0 thanks mostly to perfect runs by Ellingsen and Bjørnerud, who piloted a pair of very strong base-blue decks, while Ganz struggled with a weak red-green aggro build – “we could have had him drop," Bjørnerud joked.

The team wasn’t among the favorites entering the event, but it should come as no surprise that they found the success they did. Bjørnerud and the Swiss World Magic Cup captain Ganz both have a pair of Grand Prix Top 8 appearances to their resume – including a win for Ganz at Charlotte in 2016 – while Ellingsen is a noted Magic Online grinder whom Ganz suggested the team pick up as a third.

Ellingsen practiced nonstop for the event online – putting in nearly 200 drafts and accumulating 38 Arguel’s Blood Fast in the process – and that practice paid off in full on Saturday. As the only undefeated team remaining in the tournament, the trio enters Sunday in pole position with their sights firmly set on the Top 4. 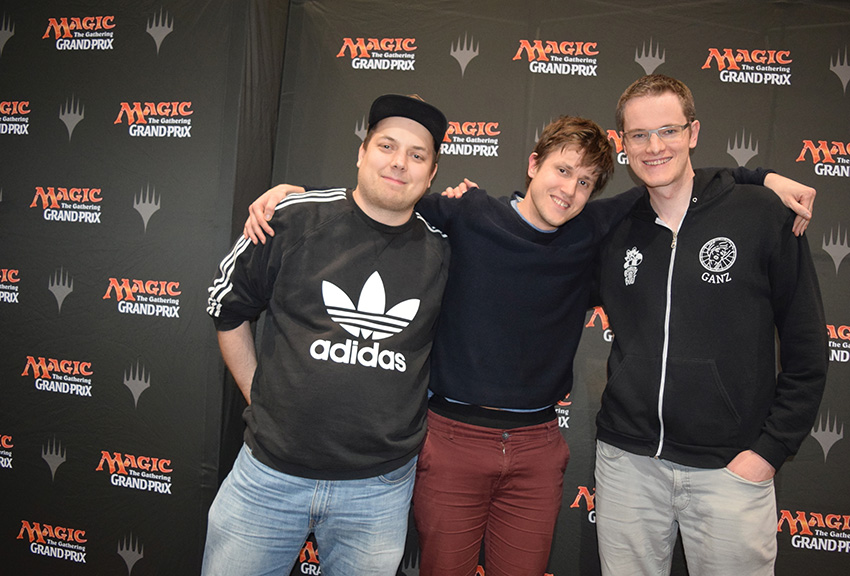