In the end, it came down to an all-Danish finals showdown.

It began with more than 600 teams – almost 2,000 players – turned out to compete in Grand Prix Lyon, and players took their final shot at Ixalan Sealed Deck as the clock to next week's World Magic Cup ticks down. And with plenty of WMC teams in attendance at Lyon (at least 13 of them), there was plenty of the line as players squared off.

And it was the team of Thomas Enevoldsen, Michael Bonde and Christoffer Larsen that won it all, knocking off fellow countrymen and friends Alexander Pasgaard, Kasper Nielsen and Marcus Hensing in an exciting final. From start to finish, the tournament didn't disappoint, and here are the stories that stood out from Grand Prix Lyon.

This was just too good not to share. Thanks to the tireless efforts of cosplayers ever since that first Elspeth cosplay graced a Magic tournament, creative cosplay has become a hallmark of the Grand Prix circuit, and opened an entirely new avenue for fans of the game and the deep trove of lore behind the cards.

Thanks to the work of Nissa Cosplay, Atlas Cosplay and Manju Adventures, the world of Ixalan and Amonkhet came together at Grand Prix Lyon, and the trio spent the weekend taking photos with fans who appreciate what they brought to the community. 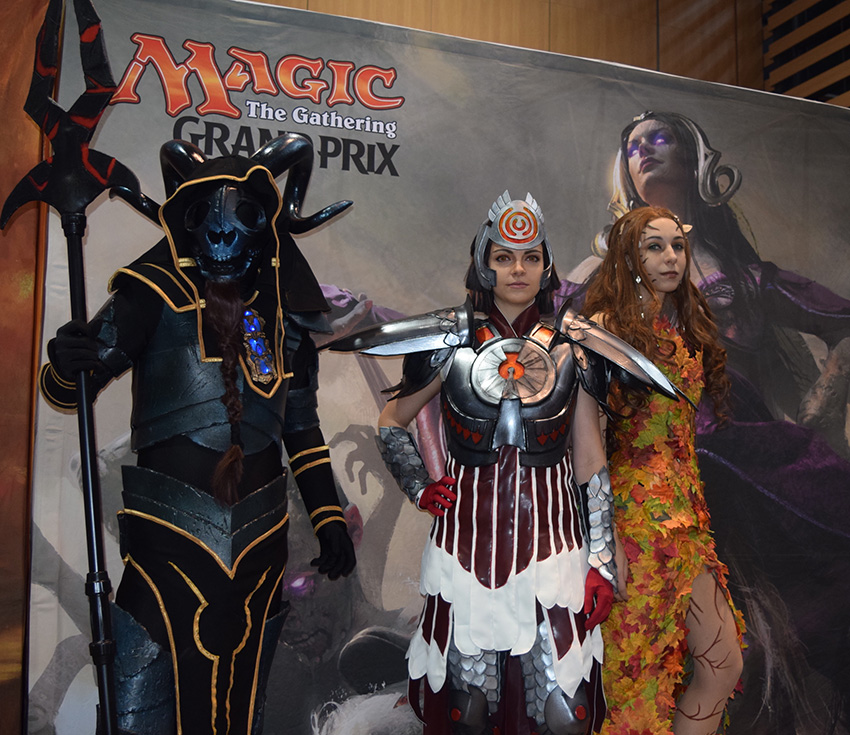 National Teams Warm Up Ahead of World Magic Cup

With the World Magic Cup on tap in Nice next weekend, a number of national teams made the trip to Lyon to get some practice before the big show next weekend. That included some powerhouse teams like the Japanese trio of Yuuya Watanabe, Shota Yasooka and Kenta Harane, while American captain Reid Duke as well as Sweden's Joel Larsson were in attendance, among plenty of others.

But, in the end, it was a pair of smaller countries that did the best. Before the tournament started, no one pencil in the Thailand national team of Sakditat Kwanchaitunya, Thirawat Chaovarindr and Chitipat Tantiyanon to be the highest finishers of the tournament, but they knocked off the Bulgarian team of Hristiyan Ivanov, Angel Pastarmadzhiev and Nikola Rashkov in the final round to finish the tournament at 11-3, a huge confidence boost heading into next week.

"Yeah, this was a good warmup," Kwanchaitunya laughed as they filled out the match slip on their final round. 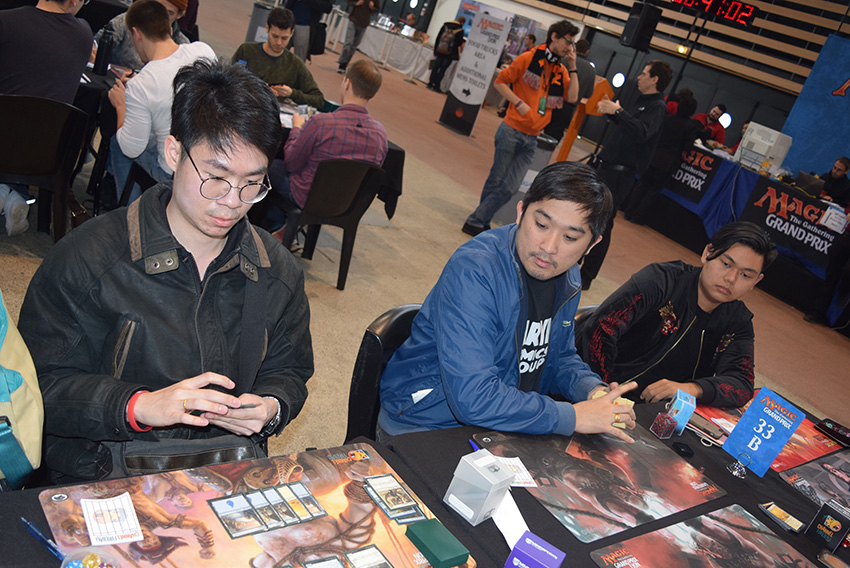 Team events are one of the best in Magic. You get together with two of your friends, open a supersized Sealed pool, build decks and have fun. The best part is, even if you lose your match, your two teammates can carry you to a win.

If, of course, you have two teammates.

The team of Johan Prinzell, Marcus Angelin and Mats Tornros entered the tournament with a different strategy – play with two players instead of three – at least for part of the day. A bold strategy, but one that worked out well for them.

"I mixed up the times on my flights, and after I missed my first flight there was no way I could make it on time," Tornros explained ruefully on Sunday afternoon. "But I guess it worked out okay."

It sure did. Prinzell and Angelin build three decks on their own and played the first three rounds of the tournament without their teammate. The result? A disappointing 1-2, but all things considered it could have been worse.

By the way, they finished the tournament 10-4, good enough to pick up Pro Points on the weekend. Talk about overcoming adversity. 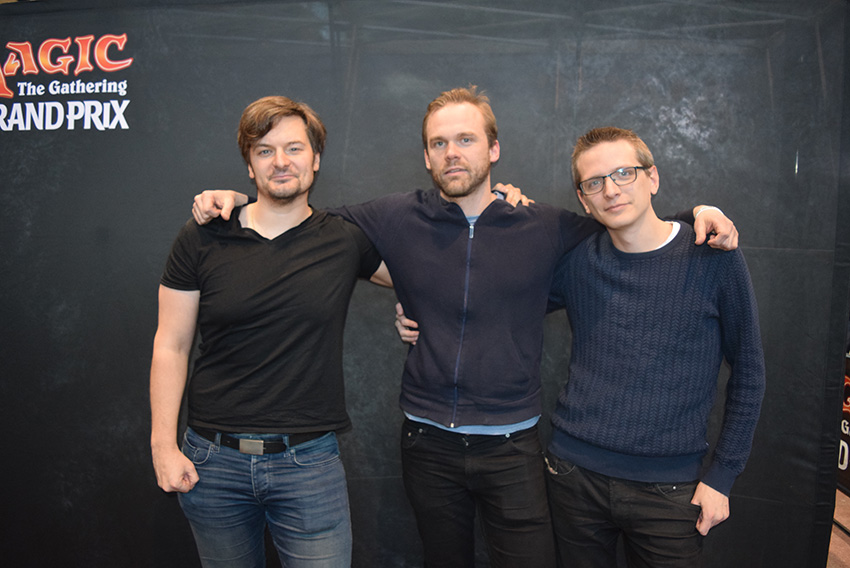 The Best on Display in Lyon

It's a rare sight to see the legendary Kai Budde at a Grand Prix these days. But a team Grand Prix and a chance to team with Antonino De Rosa and Luca Casadei was enough to bring the German Juggernaut out of GP retirement. Of course, after a disappointing and self-inflicted 1-2 start, the Hall of Famer looked like he might be out of the tournament early.

But you can never count Budde out, especially when he's surrounded by such accomplished teammates (12 Grand Prix Top 8 appearances between Casadei and De Rosa). That 1-2 start turned into seven straight wins, and just like that the high-powered trio was back in contention. Though they didn't do well enough Sunday to advance to the Top 4, it was an impressive run and one that sure was fun to watch.

And they weren't the only legends who showed up in France.

Only one PT Champ away from completing the scavenger hunt. Finally got PT Charleston/PT Kaladesh double champ Shota Yasooka @yaya3_ in Feature Match at #GPLyon pic.twitter.com/T9yses4vY2

"When we were at 0-2, I was having an existential crisis – what was I doing with my life?" lamented Thomas Enevoldsen, who teamed with Michael Bonde and Christoffer Larsen – himself fresh off a Top 8 appearance at Grand Prix Portland last weekend – for Grand Prix Lyon.

All the way to the finals, where they squared off against fellow countrymen Alexander Pasgaard, Kasper Nielsen and Marcus Hensing in a team draft that Larsen – an avid team drafter – described as the moment that his entire Magic career to this point had built to. Once there, Larsen took down Nielsen in a tense third-game thanks to a Kinjalli's Sunwing that slowed Nielsen down enough for Larsen's team to crash in for enough to put his team up a match. 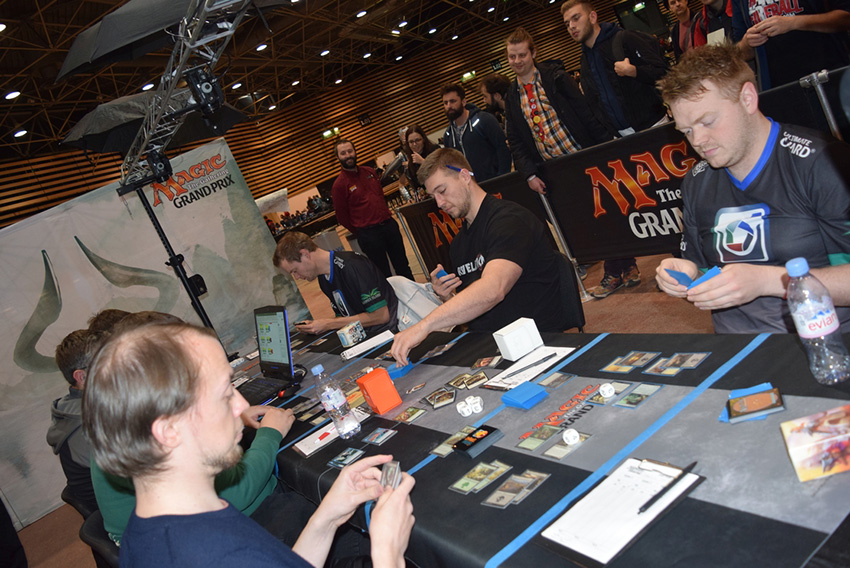 But both Larsen's teammates still faced an uphill battle. Enevoldsen couldn't quite stabilize against Pasgaard's green-blue Merfolk deck before falling to fliers in the first game, and that sent things over to Bonde and Hensing – locked in a tight game three – to possibly decide things.

Bonde and Larsen exchanged a high-five before the final game, and there was never a doubt. Bonde's army of Vampires started the beatdown early, and when Anointed Deacon arrived to begin powering up Skyblade of the Legion, things ended in short order – all the excuse Larsen needed to rush to Enevoldsen and wrap him up in a giant bearhug as the trio celebrated becoming the champions of Grand Prix Lyon. 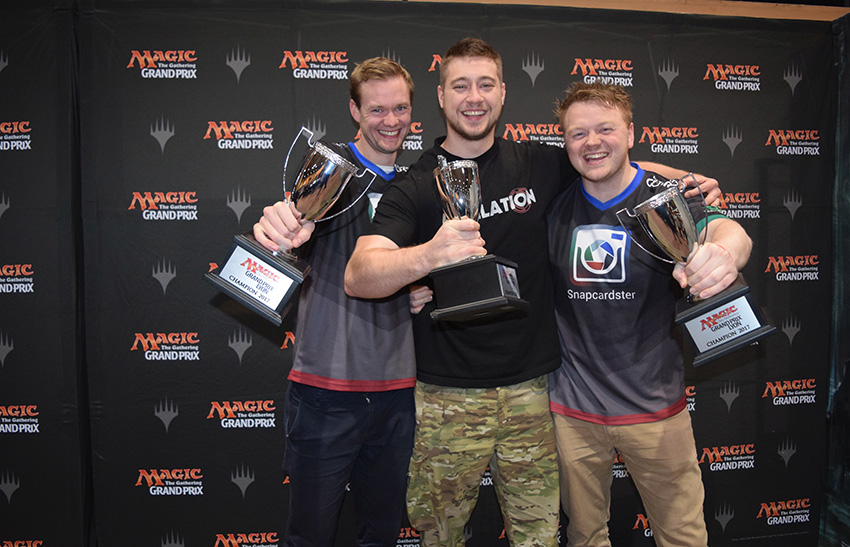