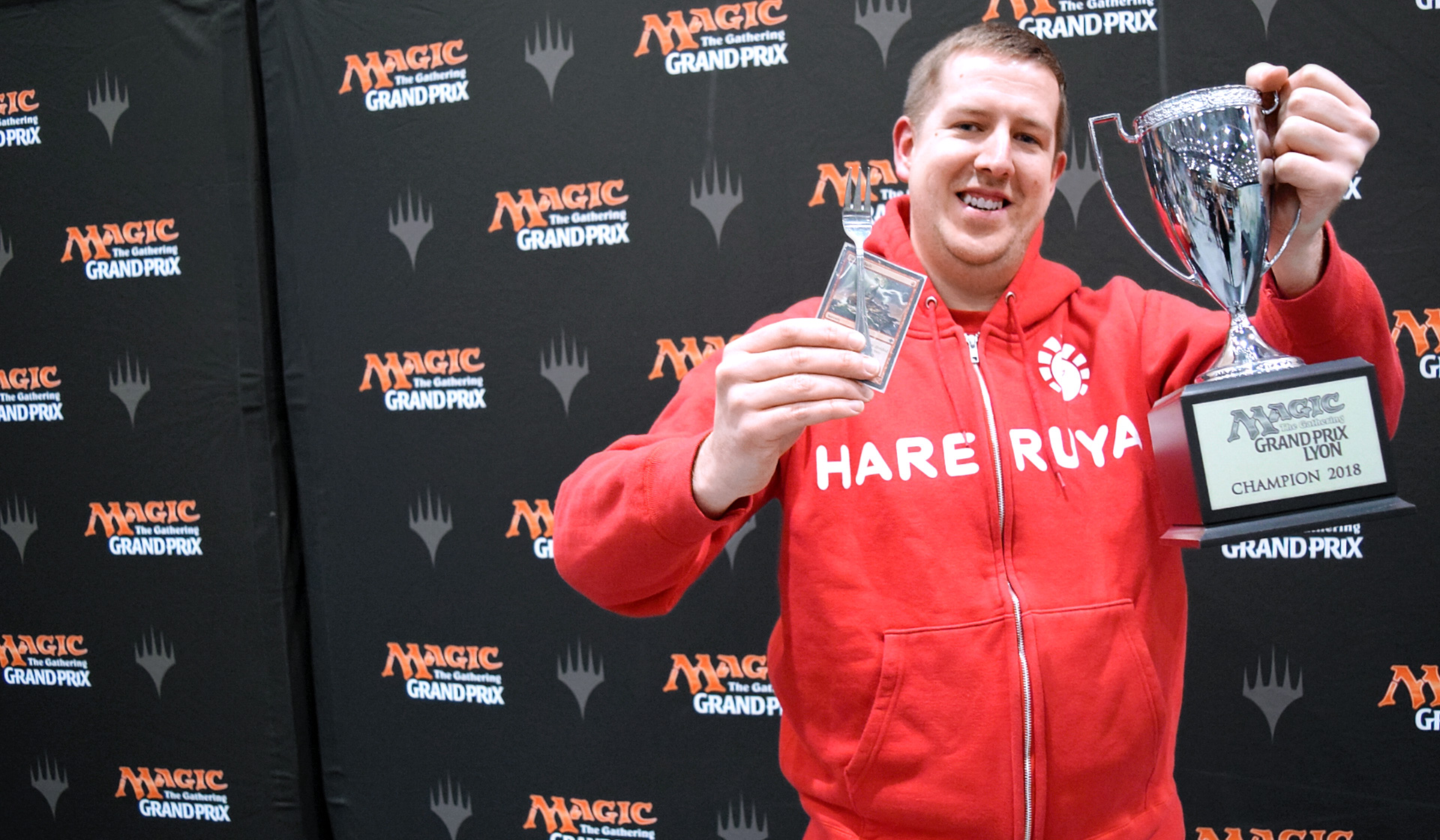 THE HASHTAG FOR GRAND PRIX LYON IS #GPLYON. JOIN THE CONVERSATION.

A whopping 2,058 players had been in the running initially, a testament to the unwavering popularity of the Modern format. After the first day's eight rounds, this number was down to 387, and seven rounds later, eight gathered for the playoffs. At the end of it all, of course, there could be only one to hoist the trophy and claim the title.

While the field at large was as varied as always, the big story of the Top 8 was four Mono-Green Urzatron decks making the cut. However, worries about Tron dominance may have been premature, as the next 24 in the ranking only added two more Tron lists to the total. The Tron decks also didn't do particularly well in the Top 8, and the final was a battle between 2016 Worlds finalist (20) Márcio Carvalho playing Abzan and 2017 WMC finalist Grzegorz Kowalski and his Red-Green Eldrazi.

Earlier on Saturday morning, 2,058 players arrived in Lyon to play in the main event—the last major Modern event before Bloodbraid Elf and Jace, the Mind Sculptor would become legal. In the end,...

After fifteen rounds of Modern, with a total of 2,050 others eliminated, only eight players remained in the running for the fame and the fortune, the title and the trophy. Find out more about...

If you'd like to (re-)watch your favorite deck or player but don't have the time to sift through over 20 hours of video archives, we have a handy guide for you. In chronological order, grouped...

There is more to this event than just the Top 8. Below are the decklists of the players who finished in 9th through 32nd place. All of them were at most one match win and/or a tiebreaker boost...

2,058 players had entered the tournament in total, but only thirteen of them escaped the first day's eight rounds with perfect records of 8-0: Arthur Brocsko, Matic Penko, (20) Márcio Carvalho,...

In the morning, a whopping 2,058 players shuffled up their cards, full of hopes for fame and fortune and a spot in the second day of Grand Prix Lyon 2018. But after eight rounds of Modern, only 387 of them had earned the requisite record of 6-2 or better.

Leading the charge into Day 2 were thirteen players at 8-0: Arthur Brocsko, Matic Penko, (20) Márcio Carvalho, Malte Smits, Kim Ströh, Florian Koch, Davide Cappiello, and Mehdi Chelil (pictured above, left to right) as well as Leonardo Dalmasso, Julien Henry, Vjeran Horvat, Raul Vallejo, and Ricardo Sanchez (not pictured). The archetypes they piloted included two copies each of Burn, Urzatron, Lantern Control, and Mardu Pyromancer, but Modern showed no signs of settling down. Wackier strategies like Mill or Jeskai Ascendancy finished the day at 7-1 and the combination of Soulflayer and Zetalpa, Primal Dawn went 6-2 too …

Tune back in tomorrow to see all of that and more, as well as the epic conclusion of Grand Prix Lyon 2018!

2,058 players started things off for the Grand Prix Lyon main event, and after eight rounds of Modern action, only 387 players reached the minimum of 18 match points (6-2 or better) required to...

The Grand Prix itself only started on Saturday morning, but the Magic action here in Lyon already began on Friday. Most importantly, the day's Trials offered players a final chance to earn byes...