With 1,875 competitors, Madrid's was the biggest of the weekend's Grand Prix events, and a number of big stories came out of it too. The perpetual popularity and the everlasting evolution of Modern, its debatable diversity, the specifics of Unified Deck Construction and the big winners, people and decks alike—those were what made the headlines here at Grand Prix Madrid 2017!

Lantern Control had been one of the bogeymen of the format for quite a while now: a prison strategy attempting to put the opponent into a lock by controlling the top of their library with the combination of Lantern of Insight plus Pyxis of Pandemonium/Codex Shredder/Ghoulcaller's Bell. It was famous for making matches go to extra turns and have them end in draws and/or tears.

In Team Modern, Lantern Control wasn't as common as in single-player Modern, as two-time GP semifinalist Thoralf Severin pointed out: "If you want to run Lantern, your other decks won't be able to use Inquisition of Kozilek and Thoughtseize. Affinity would be out because Lantern needs Mox Opal, and it also takes the Ancient Stirrings away from a possible Tron deck."

"It does take away a lot of cards," Pro Tour champion Ivan Floch agreed. "But in Modern it's not that big of an issue. You can generally play whatever you like and you can still find two real decks to go along with it. I mean, I've seen people play Four-Color Death's Shadow or even Five-Color Death's Shadow and do just fine regardless." 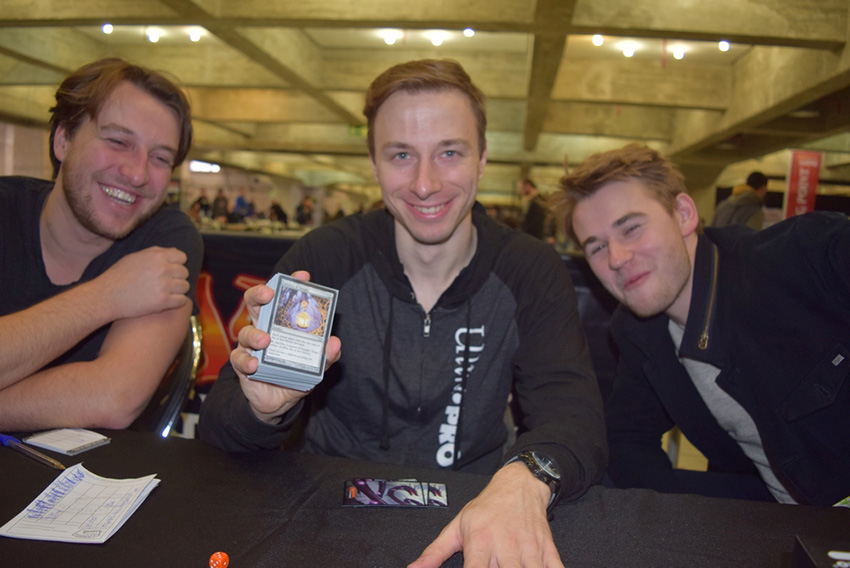 Which left the original question, whether Lantern of Insight was a problematic choice considering the time constraints. Ondřej Stráský had taken to Twitter throughout the weekend to keep the world posted on the number of unintentional draws his team got and, of course, to make fun of teammate Ivan Floch.

The number of draws came to three on the first day alone, with another two narrowly avoided. Highlights of the latter included such gems as Stráský going: "One of my teammates just started a sentence with 'Last time I was 6-0-3 after day 1 ...,'" or quoting Floch pre-tournament as saying: "I actually think lantern is not that much in danger of drawing."

Fun was had by all, and Floch himself joined in on it. When asked whether he still considered Lantern a good choice, he replied, "Yeah. But not in the middle seat!"

Stráský wasn't as optimistic, but also stressed the problem with team communication, stating, "[I] think not allowing players to discuss plays would be a huge step in making Lantern playable in this format."

"Lantern is a great deck. I wouldn't advise just anyone to play it, but if you know, like really know, what you're doing and can be super fast with it, no need to consult your teammates or anything ever, then you should definitely go for it," concluded Floch. Then added, "Maybe I shouldn't have played it, though."

In case you made it this far without getting a proper definition: This weekend's format of Team Modern dictated that each team had to field three decks which didn't share any card except for basic lands. For instance, if one deck or sideboard included Thoughtseize, no other deck or sideboard could include Thoughtseize.

It wasn't entirely clear how much of an additional design constraint this put on teams. I wanted to see for myself whether I could find any recurring patterns among the top teams. So, in Round 10, I went and looked at the top ten tables. Here's the full list of what I found:

A lot to analyze and a few outliers, like the prevalence of Urzatron at the very top or White-Blue Control, drew my attention at first. On second glance, however, the big story appeared to be Blue-Red Breach. Four of the teams at the top ten tables had one these in their line-up. Not quite as many copies as Grixis Death's Shadow or Affinity, but more than Storm or Primeval Titan decks.

Under a Blue Moon

The idea to run Through the Breach and Emrakul, the Aeons Torn in a blue-red shell, as a simple two-card combo, had been around for years. In this, the deck was inspired by Legacy's Sneak Attack/Show and Tell; and when it came to controlling the tempo of the game before ending it in one fell swoop, it borrowed heavily from the old Splinter Twin pre-banning.

The deck just never performed as well as any of its famous predecessors. Yet, at this Grand Prix a lot of people put their trust in it. Like, for example, Pro Tour Fate Reforged champion Antonio Del Moral León!

4 Through the Breach 1 Keranos, God of Storms

Sure, the deck was probably extra appealing under the Unified Deck Construction rules. But maybe that wasn't the whole story. In fact, with Urza's Tower and Valakut, the Molten Pinnacle playing more of a role in Modern as of late, disruption like Spreading Seas and Blood Moon was at a premium. Notably, this deck incorporated Blood Moon more seamlessly than any other.

As a rule, when the format is Modern, an unrivaled variety of decks is what one has to expect. Modern tournaments regularly feature a Top 8 with eight different archetypes and a field much more unpredictable than Urza, Academy Headmaster.

So there needed to be special circumstances to substantiate any claim of unexpected variety. The special circumstance in this case was of course Team Modern. Forcing the players on each team not to share any cards automatically ensured that teams would be sharing a lot of archetypes with other teams. After all, the goal had to be to maximise the use of Modern's most powerful building blocks. If you scrolled back up, for example, you'd see that Round 10's top twenty teams only came up with twenty different decks. Heck, the top two tables both featured a proper mirror match. Such was the overlap one could expect ...

Then came the Top 4 and gave us:

Depending on how you were to count the two Primeval Titan decks, that was ten to eleven different archetypes. One shy of the absolute maximum. And that was despite all the Unified Construction rules giving incentive to the contrary.

Uneven, But Not Uneventful

The final matches of the weekend started off blisteringly fast. The duel between Luis Salvatto's Elves and Cristian Ortiz Ros's Blue-Red Storm was over in record time. 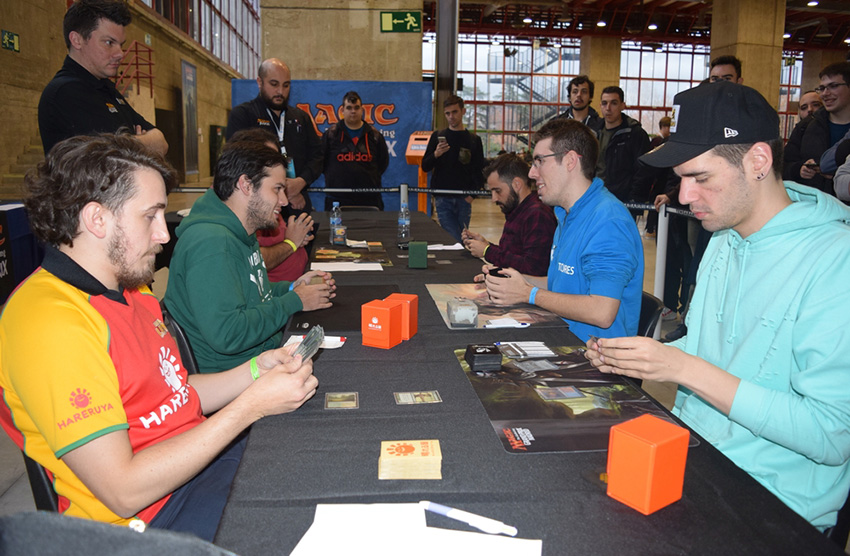 Luis Salvatto and Cristian Ortiz Ros, the A match, pictured in front

In each of two games, Ortiz Ros fired off a small Grapeshot to slaughter a bunch of Elves early. Each time, Salvatto never got back into the game and Ortiz Ros had enough time to prepare a definite killing blow.

Next was the B match between Francisco Sifuentes and Rodrigo Togores, with Valakut, the Molten Pinnacle on either side. This took a little longer, but was just as lopsided. In the first game, Togores, inexplicably, never made it past five lands.

In the second game, Sifuentes was the first to reach six mana and summon Primeval Titan. On the following turn, Togores went to seven lands with the help of Summoner's Pact/Wood Elves and cast Scapeshift. This allowed him to kill the opposing Titan, but left him very much exposed to just about anything otherwise. Sifuentes had a Summoner's Pact of his own, got another Titan, and took the match. 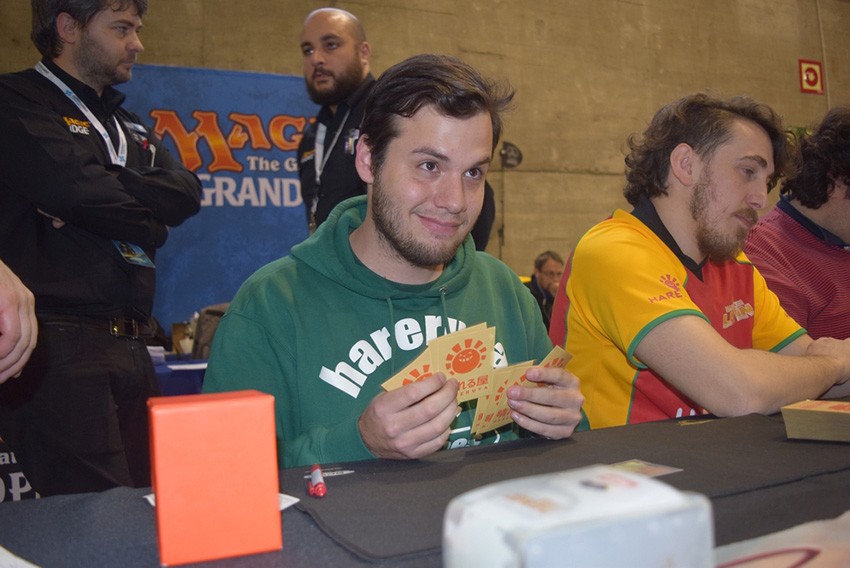 Now, it all came down to the final match between Pedro De Diego and Adrian Ramiro Cano. Of course, there was Lantern Control involved here, on De Diego's side, while Ramiro Cano was running Abzan Company.

In the first game, De Diego was able to keep Ramiro Cano's creatures at bay with Ensnaring Bridge, and the combo of Vizier of Remedies plus Devoted Druid was disabled too, thanks to Pithing Needle preventing the Druid from untapping. However, Ramiro Cano was able to assemble the other, the older combination including Viscera Seer and Kitchen Finks. An arbitrarily large life total was irrelevant in this particular matchup, but the ability to scry at will was very relevant indeed. 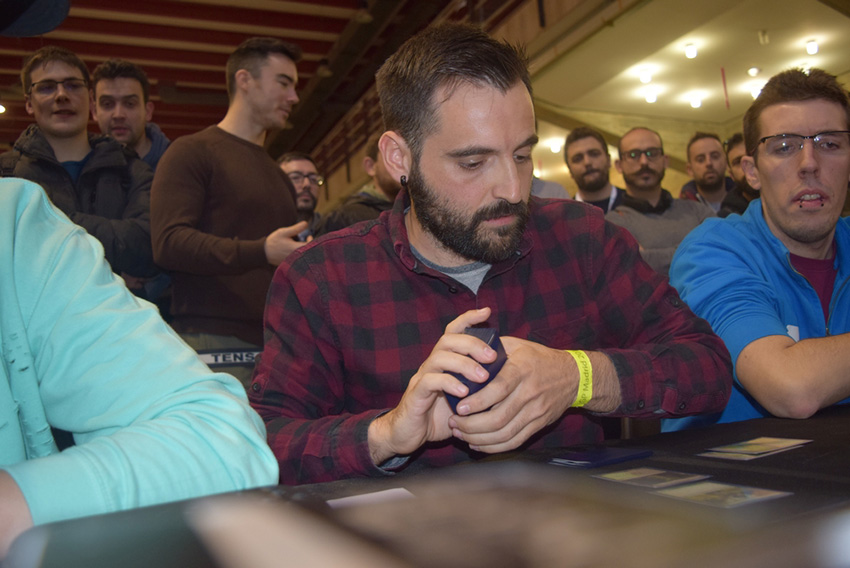 The actual process of reducing De Diego's life total to zero was anything but trivial. Eventually, though, attacking Birds of Paradise boosted by Noble Hierarch and Walking Ballista got there.

The second game went much better for De Diego, with an early Grafdigger's Cage stranding both Collected Company and Chord of Calling in Ramiro Cano's hand. 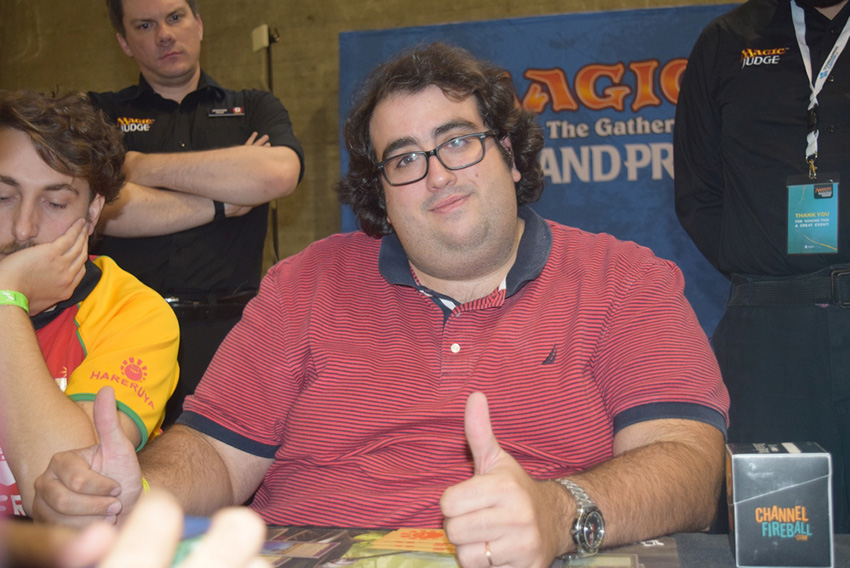 Things were looking up for Pedro De Diego

De Diego quickly populated the board with Lantern of Insight and multiple Codex Shredders. The chances of Ramiro Cano getting anything worthwhile from his library were slim and getting slimmer, at least the old fashioned way via the draw step.

However, Ramiro Cano already had a couple of highly relevant cards, including a Duskwatch Recruiter, and was able to use it to find a replacement Duskwatch Recruiter in response to De Diego's Abrupt Decay. De Diego needed to use Whir of Invention to search up a Pithing Needle after all. To add insult to injury, now he was missing a Decay/Needle to deal with Ramiro Cano's Walking Ballista. 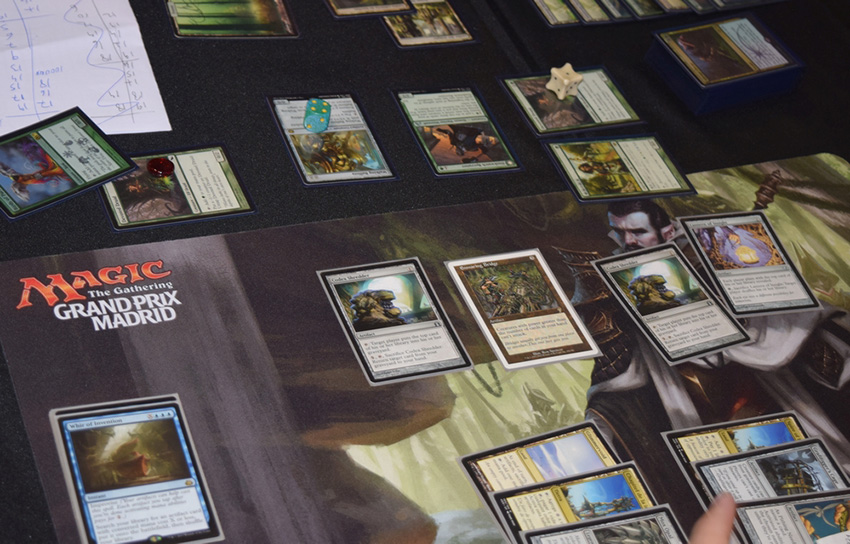 Birds of Paradise was getting in for damage once again, and Walking Ballista was a ticking time bomb ...

Before long, De Diego found himself in the unfortunate position that he needed to use his Codex Shredders to keep his opponent even from drawing an untapped land, lest he'd die to Walking Ballista on the spot. Then of course, he also needed to tap the Shredders to try and find a more long-term answer to the Ballista. There was a moment of utter suspense as card after card was turned over. All to no avail. A last-ditch sacrifice of Lantern of Insight to shuffle would have to do it ...

De Diego flipped over the top card of his now unknown library: Thoughtseize, literally the worst card at this point, a nice final touch. But De Diego was already extending his hand at this point, becoming the first to congratulate the champions of Grand Prix Madrid 2017: 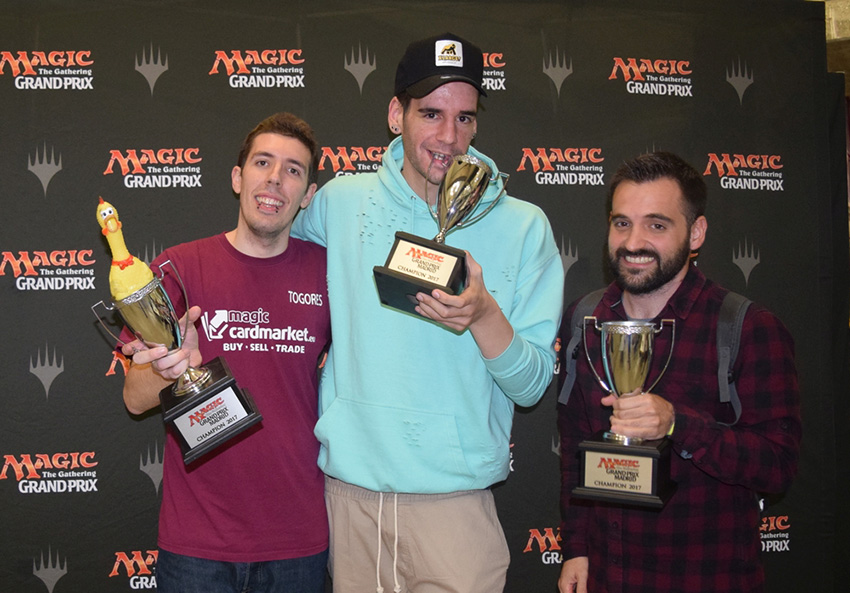