Posted in Event Coverage on December 9, 2017

For Europe, this was the final big event of the year and also the last of a trio of team events: Grand Prix Lyon two weeks earlier had featured Team Limited, the World Magic Cup on the previous weekend had been all about Team Sealed plus Team Standard, and now there was Team Modern.

1,875 players, or 625 teams, had traveled to Madrid this weekend. They had come from near and far, all the way from the United States and Canada and even Japan. Team tournaments had always been popular, of course, drawing huge crowds and bringing out the big names ... 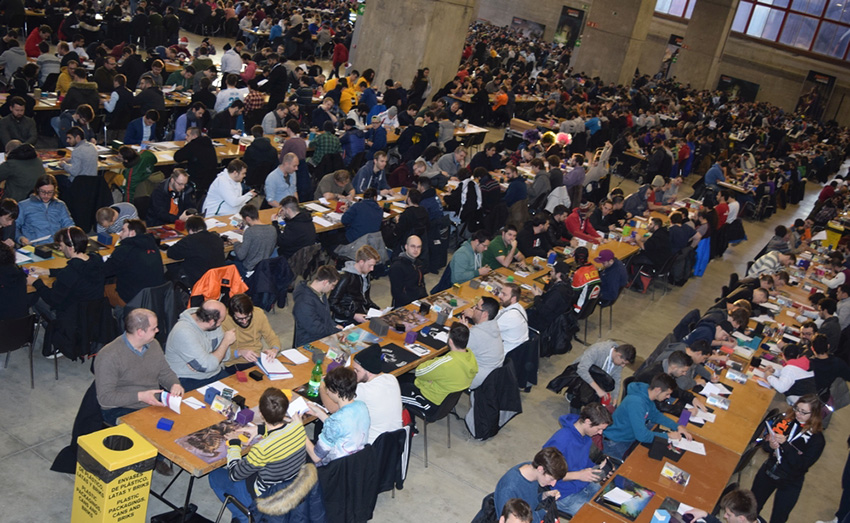 For instance, Pro Tour champions Lukas Blohon and Joel Larsson were joined by (2) Reid Duke ... (17) Andrea Mengucci and (19) Christian Calcano were playing with Pro Tour Aether Revolt semifinalist Eduardo Sajgalik ... World Championship finalists (10) Márcio Carvalho and (13) Javier Dominguez brought along Thiago Rodrigues ... Christoffer Larsen, who won a Grand Prix and entered the Top 8 of another all within the past three weeks, had picked up the Martins Dang and (20) Müller ... The Czech důo of (4) Martin Jůza and Petr Sochůrek joined forces with Poland's Gold pro Grzegorz Kowalski ...

And that was barely the tip of the proverbial iceberg; or the shark's fin. These really were dangerous waters here.

At Team Grand Prix events no byes are awarded. It still only took a few rounds for various proven Magic experts and pro players to rise to the top of the standings. (Why do good players make for an even better team, one which is more than the sum of its parts? There's an actual mathematical reason.

In any case, the pairings for the fourth round were the first to set the internet atwitter, when Petr Sochůrek, (4) Martin Jůza, and Grzegorz Kowalski faced off against (19) Christian Calcano, Eduardo Sajgalik, and (17) Andrea Mengucci ... Said Twitter, "[W]ho do I even root for here?!?" 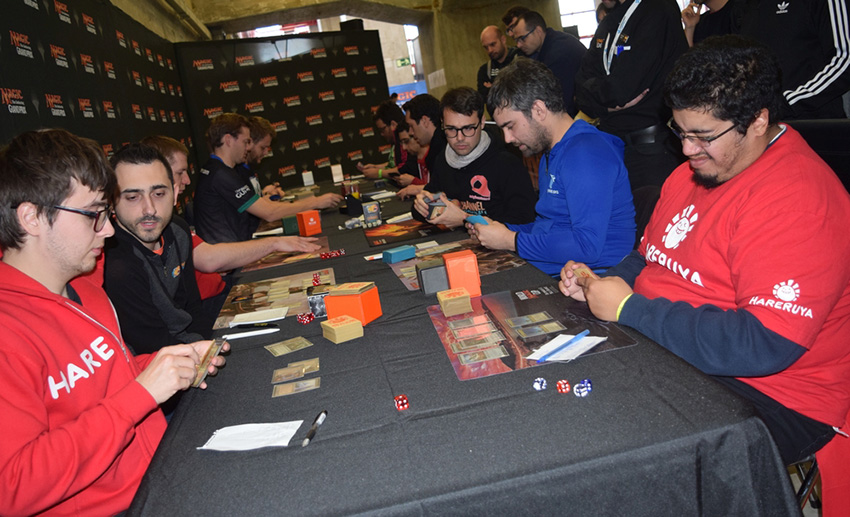 Combined, these six people could boast a whopping 50 previous Grand Prix Top 8 finishes, including nine wins, as well as seven Sunday appearances at the Pro Tour. Naturally, this weekend was going to be a perfect opportunity to add even more to these stats, and the US-Canadian-Italian team prevailed and stayed the course for further glory.

The hits continued. Just one round later the feature match had a World Magic Cup finalist with three Grand Prix Top 8s under his belt, a GP champ, and a GP quarterfinalist do battle against a PT champ with two further PT Top 8s to his name and two teammates with their own Top 8 finishes at the Pro Tour ... 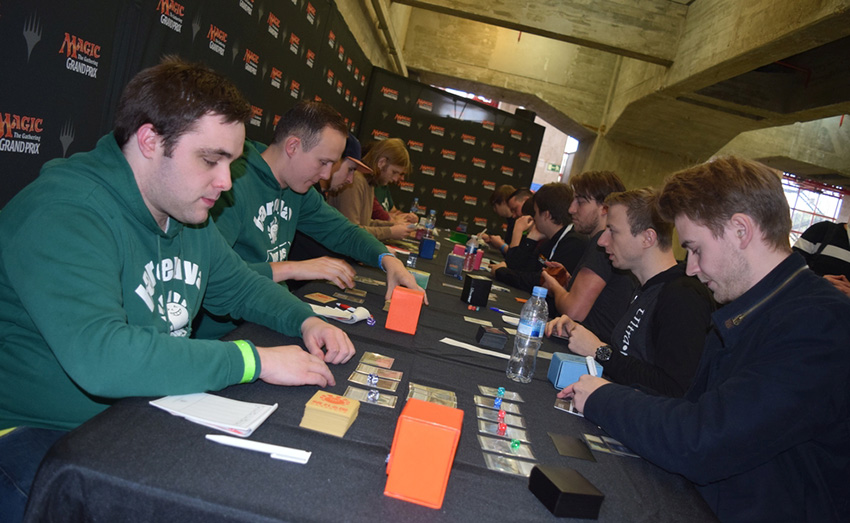 Neirynck and friends on the left, Stráský, Floch and Hendriks on the right

Here, Pro Tour M15 champion Ivan Floch lost his match against Bart van Etten, but Thomas Hendriks won the Jeskai mirror against Mitchell Manders while Ondřej Stráský won the Humans mirror against Branco Neirynck. Going first, Stráský cast Noble Hierarch, Thalia's Lieutenant, Thalia, Heretic Cathar, another Thalia's Lieutenant and another Noble Hierarch all within the first four turns. On the draw but already down a card after a mulligan, there was nothing Neirynck could do about this.

By far the largest crowd, however, gathered to watch the Round 7 match of Pro Tour champion Joel Larsson, No. 2 Reid Duke, and Pro Tour champion Lukas Blohon—pictured below, with their backs against the wall, left to right: 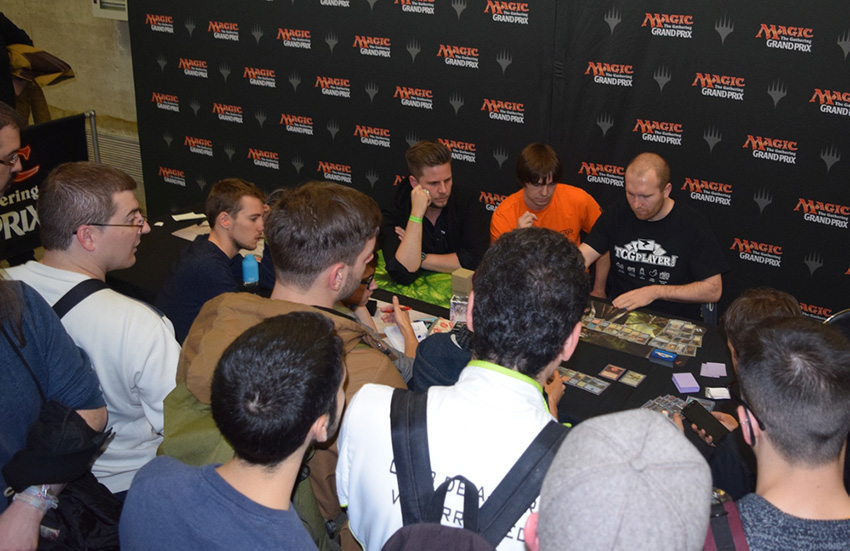 The feature match area was under siege

Their opponents, Arnaud Hocquemiller, Julien Henry, and Arnaud Soumet, had several Grand Prix Top 8s between them, but any comparison between the two teams was hardly fair; of course the French were the underdogs here!

In the end, it all came down to one game between Blohon on Jeskai and Hocquemiller on Blue Moon. Blohon managed to get Hocquemiller to pick a counterwar over Snapcaster Mage at the end of the latter's turn; then untapped and resolved Keranos, God of Storms. The underdogs did go under.

This was the first Grand Prix to feature Team Unified Modern this side of the Atlantic. Or the Pacific, for that matter. Data on promising combinations of decks was slim, but possibly valuable. So I began to look for recurring patterns; for instance I noticed a lot of teams going with one Urzatron deck and one blue deck and one other deck. But it definitely was more complex than this, once Affinity and Jund and all kinds of strategies entered the picture.

When I spoke to some of Berlin's most famous players following their Round 2 feature match, I was assured that data collection probably wasn't worth the effort. "Basically, you can play whatever you like," said Arne Huschenbeth, winner of Grand Prix Rimini 2016. "The Team Unified Construction rules don't impose that harsh restrictions, compared to the endless possibilities of Modern." 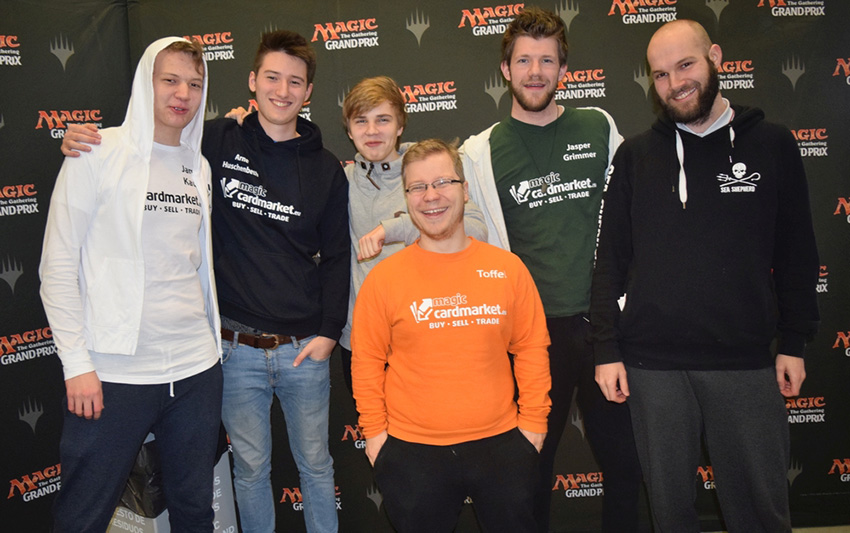 "There are some decks which are really hard to work into your line-up," noted Thoralf Severin, who had reached the semifinals at Grand Prix Liverpool six weeks earlier. "Lantern Control would be the prime example. If you want to run Lantern, your other decks can't use Inquisition of Kozilek and Thoughtseize. Affinity would be out because Lantern needs Mox Opal, and it also takes the Ancient Stirrings away from a possible Tron deck."

They also mentioned Infect as a deck which didn't play as well with others as others, as it needed Noble Hierarch and Inkmoth Nexus, ruling out both Affinity and Collected Company.

"In any case, there's no obvious trifecta of decks in the format," said three-time GP Top 8er Jasper Grimmer. "For example, we ended up with Tron, White-Blue Control, and Collected Company. There used to be this idea that you'd have to decide on one 'Lightning Bolt deck' or one 'Thoughtseize deck.' Well, we literally have neither!"

"It's quite simple: If a team has a die-hard Affinity player, then I'll expect them to have an Affinity deck in their line-up," Severin concluded. "Team Unified Modern still is Modern, and one central feature of Modern is that players can follow their preferences and play what they love to play."

The nature of team play has it that one player will always be the last to finish their match—and sometimes won't be able to finish it, because their team already won the other two matches. So it wasn't so much that a slow player would leave his teammates hanging; it could just as well be the other way around.

Anyway, on Twitter today, Ondřej Stráský and (17) Andrea Mengucci had some kind of competition going, one-upping each other with "complaints" about their "slow" teammate, some good-natured ribbing included:

Second round took little more than first round, but again me and Calc sweeped our opponent. Eduardo hasnt finished 2 games so far. Lol 2-0 #GPMadrid

Won round 2, @IvanFloch19 has yet to finish a match! #gpmadrid

No news here at #GPMadrid. Me and Calc win when Eduardo is Turn1 Game2. 3-0

.@IvanFloch19's unfinished match streak continues, luckily my deck is straight up broken and Thomas Hendriks is a god #gpnaf1

Aparently Eduardo saved all his luck for when he had to face Juza. Him and Calc got there before I could finish mine. 4-0 #GPMadrid

HE DID IT!! @IvanFloch19 won a match. It didn't matter as both me and Thomas won but it still feels good! #GPMadrid

Same old stories. Me and Calc finish before Eduardo. (He was about to win though... still: scoreboard!) 5-1 #GPMADRID

Second draw. Just as we drew it up! #GPMadrid

3rd draw. NO BIG DEAL. Going for the least amount of wins to make day 2 #GPmadrid

Going into the last round of the day, Hendriks, Floch, and Stráský were still undefeated, in a way, and had already secured a Day 2 berth, with their 5-0-3 record. But they definitely reconsidered the wisdom of letting Ivan Floch play the notoriously time-consuming Lantern Control ...

Thankfully, the epic story finished on a happy note, with an appropriate ending ...

This was honestly one of the most enjoyable days of Magic. My teammates were great, I'm enjoying Modern only downside is 9 rounds - sooo many #gpmadrid

One of my teammates just started a sentence with "Last time I was 6-0-3 after day 1..." this is just too good #GPMadrid

The (Other) Undefeated Team

In addition to the aforementioned 6-0-3 team, there also were three players who managed a proper 9-0 run: 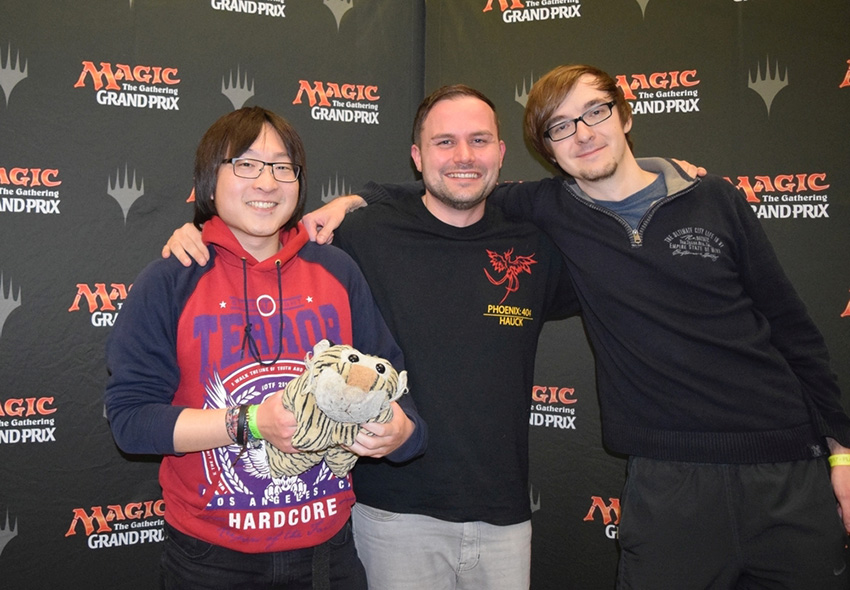 All three called Mannheim, Germany, and the surrounding area their homebase, but this was the first time the three of them were playing together as a team at a major tournament. In fact, the 31-year-old student Heuser was probably best known for his one previous Top 8 at Grand Prix Turin earlier this year where he could have faced Hauck not as a friend but as an opponent.

Heuser mentioned that he had played in two Pro Tours now and was qualified for the upcoming Pro Tour Rivals of Ixalan as well. "So I guess I'm locked for Bronze!"

The 33-year-old controller Hauck had reached the playoffs of a Grand Prix twice before Turin. And ever since, Hauck was on a mission, it appeared. His big break came at the most recent Pro Tour, Ixalan, where he finished in sixth place, and now he was back with yet another strong performance.

"My personal record today was 7-2 with Tron," said Hauck. "But I did manage to beat both Infect and Valakut, on the draw even. That's quite an achievement."

The third player on their team was the 26-year-old trainee programer/consultant Xiaoliang Yang who was so far unknown to the world—but not to Hauck. "I'm just the back-up player," said Yang. "I'm just part of the team because I've known Christian for something like ten years. [After his Pro Tour Top 8] Christian could have played with anyone. That he trusted me and that we ended up 9-0 despite all the misplays I made—that's the greatest story of the day for me!"

More great stories were of course to come ...

Posted in Event Coverage on December 9, 2017