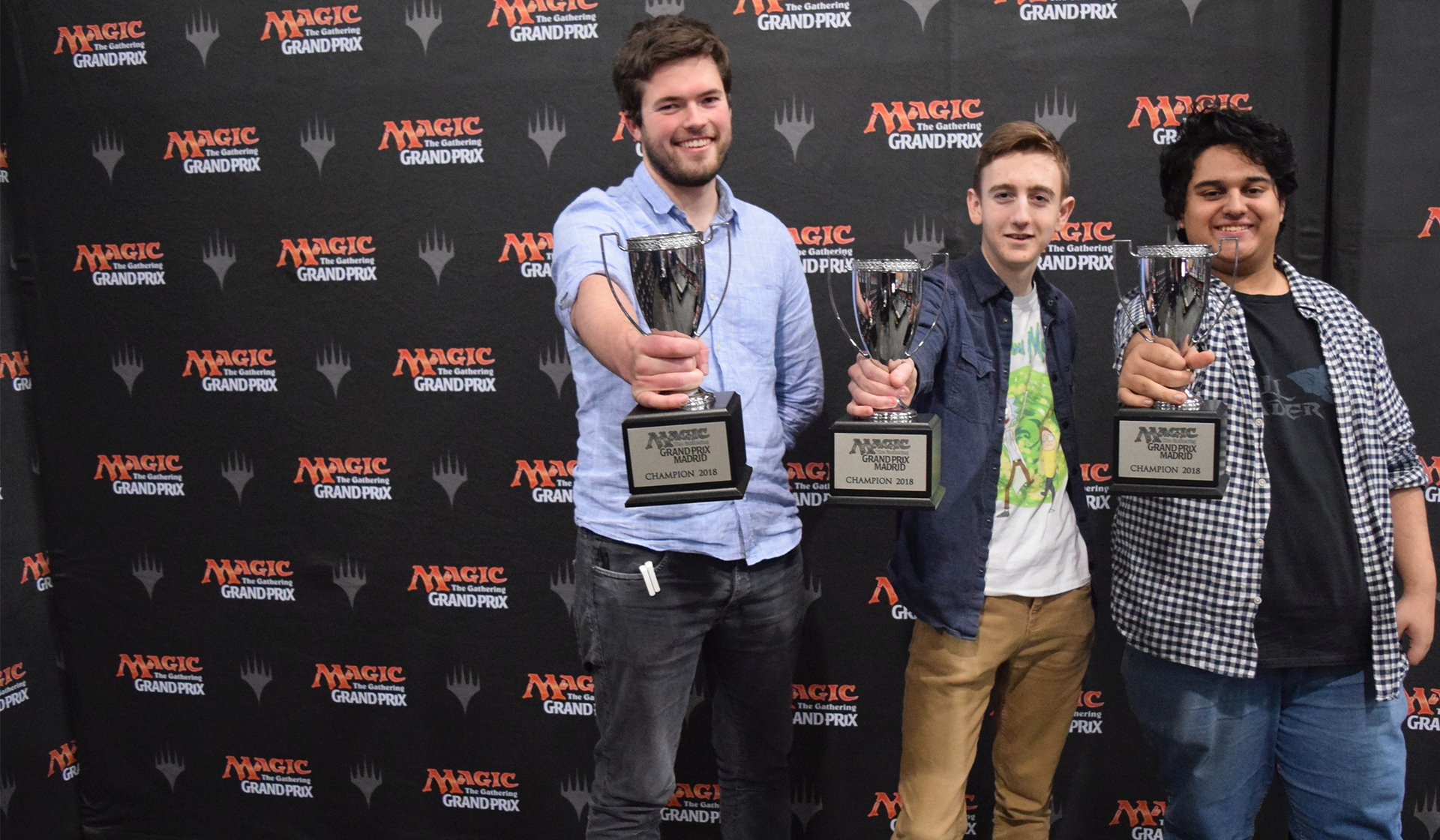 THE HASHTAG FOR GRAND PRIX MADRID IS #GPMADRID. JOIN THE CONVERSATION.

With 354 teams battling in three formats at once, the weekend featured a wealth of spicy brews and provided a deeper insight into the current state of Standard, Modern, and Legacy. Also, we got to witness a number of close and exciting matches, nailbiters and rollercoasters all around. It was carnage, really, and after the first day's eight rounds, only 45 teams had qualified for Day 2.

In the end, four teams gathered in the feature match area for the playoffs, including multiple World Magic Cup and Grand Prix champions. In fact, the only team for whom this marked the first big break was the British trio of Christoph Green, Ben Jones, and Charles Eliatamby—but they made it count. They first dispatched five-time GP Top 8er Elias Watsfeldt, Pro Tour champion Joel Larsson, and Per Nyström in the semifinals in two matches, leaving the third unfinished. Then they repeated this feat in the finals against Andreas Petersen, Michael Bonde, and Thomas Enevoldsen, the latter two of whom had just won the Team Grand Prix Lyon in November.

It certainly wasn't an easy path to victory, adding all the more meaning to this triumph. So congratulations to Christoph Green, Ben Jones, and Charles Eliatamby, champions of Grand Prix Madrid 2018!

Grand Prix Madrid has concluded. A grand total of 1,062 players showed up at the Feria de Madrid on a wet March weekend to battle it out. Or more accurately, 354 teams as Grand Prix Madrid is the...

After fourteen rounds, with a total of 346 other teams eliminated, only four trios remained in the running for the fame and the fortune, the title and the trophies. Find out more about these...

After fourteen rounds of Swiss, with a total of 1,050 others eliminated, only twelve players, four teams of three, remained in the running for the fame and the fortune, the title and the trophies....

Sixteen teams finished the Swiss rounds of Grand Prix Madrid 2018 with a record of 10-4 or better. We already published the Top 4 decklists, and here are all the others. Enjoy! ...

Simple math suggested that there'd be one 8-0 team at Grand Prix Madrid this year, but things didn't turn out simple. Instead, after a series of unintentional draws, we got no 8-0 team but...

In the morning, a total of 354 teams started playing the first Team Trios Constructed Grand Prix this side of the Atlantic/Pacific, with high hopes for fame and fortune. But after eight rounds of Standard/Modern/Legacy, only 45 of those teams reached the requisite record of 6-2 or better to qualify for the second day.

Check back tomorrow for all the action live from the battlefield, for decklists, and for the epic conclusion of Grand Prix Madrid 2018!

One of the things I did not expect from Grand Prix Madrid was torrential rain. As a Brit we're used to being drowned by the weather at home, not in "sunny” Spain. It must be a Magic in Spain...