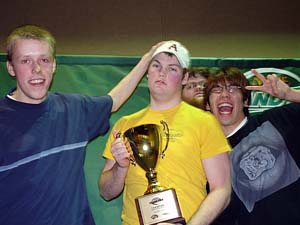 In a Top 4 that featured Rich Hoaen, Bob Maher, Eric Froehlich, Jon Sonne, Chris McDaniel, John Pelcak, and Kyle Goodman, you'd expect one of the pros of note to come out on top, but instead it was relative unknowns Faddy Josh who put together the most impressive performance of the weekend and managed to win the whole thing. Culled from the scraps of the bearl network by translator-for-the-Japanese-stars Takanobu Sato (a Japanese national attending school at Minnesota), Faddy Josh was the last undefeated team in the tournament, and won a squeaker rematch against Cedric Phillips Stole My Bike in the semifinals, putting away Sonne and company 2-1 and giving them entry to the finals. On the other side of the bracket, Kyle Goodman and his FJB cohorts looked on the brink of losing right up until they pulled it out, upsetting Bob Maher and his teammates in The Great One's home town.

With both teams of kids making it past their more experienced opponents, it was now clear that youth would win out, but would it be the names you know or the names you did not that ran away with the trophy? Tim Bulger and his Ghost Dad deck blew right through Mark Ioli, giving Faddy an early win with both of the other matches still in progress. Ben Lundquist managed to take his match to three games, but he stumbled on mana in the final game and Sato's heat made him pay for it, finishing the match before the result from Goodman and Ziegler was decided. Congratulations to Faddy Josh, the Grand Prix-Madison 2006 Champions!

4 Char 4 Flames of the Blood Hand

1 Strands of Undeath 3 Pillory of the Sleepless

4 Ghost Council of Orzhova 4 Pillory of the Sleepless 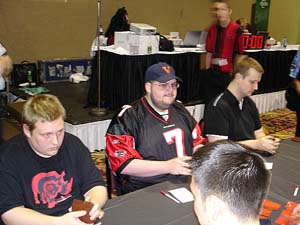 This is a rematch of a pairing from Day 1 that ended in a draw. Hoaen and company felt their matchups were actually quite good for this one, and they were reasonably confident that they could at least make the finals before the round started. With another Top 4 appearance this weekend, Efro has certainly made a case for himself as one of the best Team Grand Prix players in history, posting four Top 4s in around seven events. Kyle Goodman has also continued to perform at an astounding level in the Constructed world, netting yet another elimination round appearance with the sixty-card decks. That's pretty good for a high school student who says Magic isn't a big priority in his life.

Goodman mulliganned on the play, but was able to Castigate Hoaen on turn 2, stealing a Drift of Phantasms . That's right kids, the discard spell made Hoaen get rid of a wall, erm… defender. Castigate also revealed that Hoaen kept a two Island , two Top hand, and had yet to draw a Forest to make his two Sakura-Tribe Elder s relevant. Hoaen drew his Forest on turn 3, but was suddenly facing down Umezawa's Jitte , followed by Dark Confidant , and Ghost-Council of Orzhova. Hoaen paused for some time to do Heartbeat of Spring math with the Council on the stack, eventually concluding he was two points short of killing Goodman on the next turn. He then played stupid tricks with Sensei's Divining Top and let the Council resolve after sacrificing his two Elders with a Top look on the stack. Hoaen then found the land he was looking for in the Top 4 and proceeded to Maga Goodman right out of game 1.

Froehlich was able to take down his game 1 with help from a mulligan to five from Ioli, but Lundquist took game 1 from Maher, keeping the "Lost numbers" in striking distance.

Hoaen again had a Sensei's Divining Top on turn 1, making Goodman frown. Castigate from Goodman removed Weird Harvest from the game. Hoaen was busy ramping his mana when Goodman cast Shrieking Grotesque (netting a Muddle the Mixture for his trouble) and then equipped a Jitte to the flying gargoyle on the next turn, greatly complicating Hoaen's situation. Phyrexian Arena gave Goodman a further draw engine, and he ripped Castigate off the top plus cast the Mortify in his hand on Hoaen's Heartbeat of Spring , effectively ending Hoaen's chances to win that game, and it was on to game 3.

Ioli won game 2 against Froehlich via mana screw, and burned Froehlich out courtesy of the fickle whims of Dark Confidant and two four-point burn spells from Ioli. The last turn before Efro died, he had a Dark Confidant and Paladin en-Vec on the board, plus Slay , Wrath of God, and Ghost Council of Orzhova in hand, and six mana in play. Ioli only had a Selesnya Guildmage on the board. Efro made a Judgment call and Slay ed the Guildmage, hoping to draw a land off of the Slay and cast the Council directly afterwards. He whiffed on the land, and then died during his upkeep when Bob plus the burn spells finished off his nine life.

Lundquist always seemed to have a Keiga in play or in hand against Maher, and when he finally finished off the Great One, it gave FJB the win without the need for Hoaen and Goodman's result. 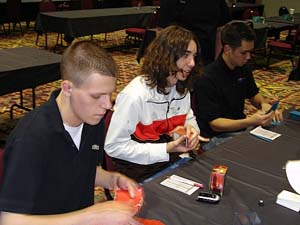 This is it, two teams of youthful energy managed to dispatch the more noteworthy favorites in the semifinals and now face each other for one more match to determine who will get their first Grand Prix title. FJB have some experience at this level before - Goodman and Ioli both have Grand Prix Top 8s on their resume, but Faddy Josh are virgins, though they did make it past Pelcak, McDaniel, and Sonne in the semifinals to get here.

Ioli mulliganned to start, but came out flying with Watchwolf , Isamaru, and Paladin en-Vec on consecutive turns, plus a Flames of the Blood Hand to counteract some lifegain from a Thief of Hope . Bulger quickly had as many kids on the board as Ioli, and every single one of his changed the life race upon entering play. Thief of Hope was cloned twice, making every spirit a drain for two, and when Ghost Dad himself hit, things looked terrible for Ioli.

"I'm not attacking this whole game," quipped Bulger, choosing the easy approach to winning. A turn later, however, Bulger was changing his tale.

"Man… I might be able to kill you this turn but that would ruin my plan of not attacking. Screw it, I'm sending 'em all."

Bulger shipped all of his men into the red zone, getting the Ghost Council through and then redirecting some damage with a Shining Shoal , triggering all three of his Thieves and sealing away game 1. Sato also won his match, steamrolling right through lundquist's Izzetron deck faster than the eye could blink.
Game 2 appeared to be all about the Descendants of Kiyomaro in Bulger's hand. Ioli had Glare of Subdual on the board with a quickness and then cast a second one to get past any Kamis of Ancient Law Bulger might find in his deck. Ghost Dad came down for Bulger, but Ioli had found Vitu-Ghazi, the City Tree, giving him a solid supply of weenies to tap Bulger's problematic men down. Unfortunately for Ioli, Bulger's hand always seemed stocked with guys or Pillories (even without Tallowisp ), so Ioli couldn't turn his apparent advantage into any favorable changes in Bulger's life total. 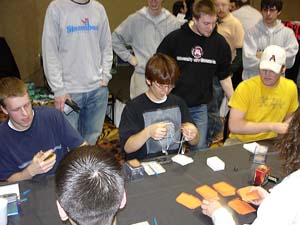 But Ziegler, Sato, and Bulger would not be denied.

Pillory life loss began adding up and Ioli was now at 5, in spite of the weenie army keeping Bugler's men in check. Ioli tried to Bathe in Light one of his tokens to get rid of three Pillories, but Bulger saw the right play and used his Rusalka to kill the token in response, countering the Bathe. A turn later, Ioli was scooping up his cards, conceding the first match to Faddy Josh.

Lundquist managed to even his match with Sato at a game a piece, but he stalled on mana in game 3, while Sato was cooking with gas. Scorched Rusalka began the beat down parade and was soon joined by Burning Tree Shaman and Scab-Clan Mauler before Lundquist got back in the game with a double Pyroclasm turn. Sato simply plucked Giant Solifuge off the top and turned it immediately sideways for two turns, dropping Lundquist to three. Ben finally found a sixth land to cast Keiga, the Tide Star , but Sato hit him with Flames of the Blood Hand in response, giving Faddy Josh the Grand Prix-Madison title!