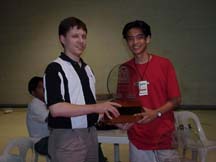 Grand Prix-Manila wrapped up at 11:30 pm Sunday night. The finals were played by two Philippine competitors, Christopher Parreña and Frederick Salazar. Although the hour was late when the Grand Prix concluded, there was still a crowd of spectators watching and cheering the players on.

Thank you to all the staff who worked so hard to make this event a success: DJ Paculio, Dean Alfar, Mike Donais and Adrian Teh as well as the many judges who spent their weekend at the SM Megamall working the tournament.