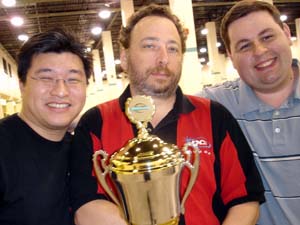 Congratulations to Matt Wang and Steven O'Mahoney-Schwartz for winning the first ever North American Two-Headed Giant Grand Prix! The New York veterans killed every creature New Jersey players Eric Ziegler and Gerard Fabiano had to offer in the finals of Grand Prix Massachusetts.

You can read all about it here but if you want to hear all the details straight from the source you can tune into the Top8Magic podcast that Steve and Matt were making all weekend. 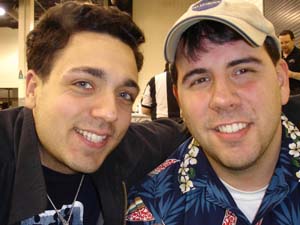 The Top 4 has been determined with the team of Eric Ziegler and Gerard Fabiano on top of the standings with 34 points. The team is back to back New Jersey champions in the 2HG format and both have a history of success in three-person teams. I interviewed Gerard for my column on Friday and his aspiration for this event was to organize a basketball game after the tournament - it seems unlikely he will have much time by the time the dust settles from this event. 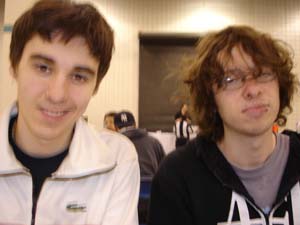 Next up are two members of the Top 8 of this year's U.S. National competition - Ben Lundquist and Tim Aten. Aten had declared that he wanted to play on the National team with Ben Lundquist and Luis Scott Vargas before the first round of play at that event. When Lundquist and Vargas went on to flank Paul Cheon at Worlds Aten joked that Paul Cheon had stolen his dream. 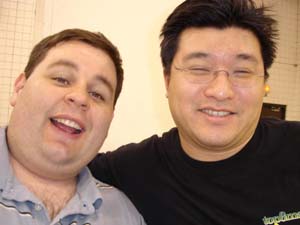 Matt Wang and Steve O'Mahoney-Schwartz have the most accomplished resumes in the Top 4 although to be fair that is mostly on Steve OMS with three Pro Tour Top 8s, multiple GP wins, and one of the most feared teams in the history of the game. Matt Wang aka 'CATAPULT!!!!' is my partner over at Top8Magic and has been chronicling his teams adventures from within the tournament. He admits the updates have been less frequent than he was expecting them to be coming into the event. 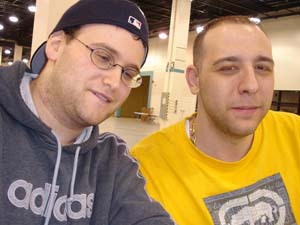 Matt Rubin and Rob DiPalma are a pair of grizzled veterans from the East Coast Magic wars. It was hard to get many details out of them about their player history as they were squabbling the way only good old friends can argue. MattR: "We don't really argue…eventually he does what I want." Matt Rubin has plenty of ties to the group in the Top 4 as he literally grew up playing events with the likes of Steve, Matt, Gerard, and Eric. This could easily be a Friday Night Magic tournament from Neutral Ground circa 1997.

You have to go down a full twenty spots in the standings to find a team with Amateur status which should attest to skill playing a large role in this new format. Certainly the players in the Top 4 all have experienced tournament success inside and outside this format but if you look a little deeper in the standings you find an impressive array of top names.

Aaron Lewis and Jesse Bourgault are certainly not household names but they are the Maine 2HG Champs - the second set of format champs in the Top 5 teams. Beneath them was former World Champion Carlos Romao and Sergio Martins. After that you find the the team that everyone assumed would win this event and Amsterdam - Richie Hoaen and Kenji Tsumura with plenty of familiar names lurking beneath.

1 Clockwork Hydra 1 Magus of the Jar

1 Uktabi Drake 1 Thrill of the Hunt

Seriously, this match could have easily been a team draft after a PTQ circa the late nineties at Neutral Ground. All four players in this match are long time players from the East Coast region. Matt Rubin - known to all East Coasters as MattR - and his teammate Rob DiPalma were still bickering over their decks as the no longer reclusive Matt Wang and the no longer retired Steve O'Mahoney-Schwartz made their way to the table.

"He got the consistent deck but I got the two bombs," explained DiPalma as he showed off Damnation and Disintegrate. They were fighting about whether or not Rubin should be mono-colored. In the end he was mono-white with a couple of weaker white cards over a splash of blue that all required double blue in the casting cost.

Matt Rubin did not feel like he could adequately shuffle his deck and asked the judge to do it for him after he took his free mulligan. He was not happy with the next set and handed it back to the judge to go down to six. He realized that it was the same judge who shuffled the hand he had just shipped back and thought better of it calling out for someone else, "Judge!"

The game finally got underway and neither Matt nor Steve did anything on the first few turns which seemed to surprise Matt: "I really expected two suspends from you guys." Not that his team was doing much either - basically just Rob summoning an Aetherflame Wall.

Matt made a Morph and Steve played totems for the next two turns along with a Flowstone Channeler. MattR's team mustered a handful of guys but Steve sent them back from whence they came with a Conflagrate.

Rubin was stalling on three lands and the high end of his curve in his hand. Premature Burial killed the Clockwork Hydra that Matt had played. Stingscourger bounced the morph and MattR's team saw Aquamorph Entity. When Matt played Prismatic Lens and Malach of the Dawn but left mana up without playing the morph again it set off a flurry of discussion on MattR's team about a Cancel they assumed had to be in Wang's hand.

Steve's Torchling raised the level of the discussion to a din as MattR urged Rob to cast what was obviously Damnation.

"Cast your spell please," asked Steve when Rob did cast the board sweeper.

"I knew you had it," groaned Rob who hadn't wanted to play the spell but the reality was that Wang had just drawn it.

Essence Sliver and Sidewinder from MattR drew Tendrils of Corruption at the end of the turn on the 3/3. Steve untapped and shot the Sidewinder. Then he activated the black Totem and the team got in for 11. Matt played another morph.

"We really need that second Damnation."

But they didn't have one. Matt eventually extended the hand. He couldn't even eat the pizza that Gerard - whose team had dispatched Aten and Lundquist - had brought for him.

"I am kind of nauseous about that Damnation. You had the Cancel the whole time, right?"

Wang tried let them feel better by saying he had it the whole time but Steve let the cat of the bag - prompting a whole new round of bickering. 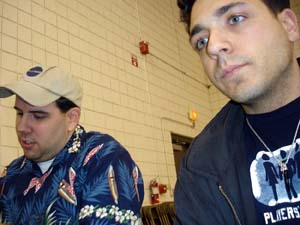 Both of the Jersey players took mulligans. Gerard liked the free one but he turned his nose up at Ziegler's hand although Eric wanted to stand pat. In the end that's what they did.

The first play was a Sinew Sliver from Gerard. Morph and Totem followed from the New Yorkers. Gerard built up his army with Poultice Sliver. Steve took them both down with Lightning Axe discarding Dark Withering and Matt attacked in for two and played a second morph.

There was a morph from Gerard while Eric laid his fourth Forest with no other play. Matt sent in his mystery men and the Jerseyites fell to 24. Tendrils took out Gerard's morph which was revealed to be Shaper Parasite. Clockwork Hydra was stymied by Gerard's Mana Tithe.

A Mountain off the top enabled Bonesplitter Sliver from Ziegler while Defiant Vanguard slipped through a bubble in time onto Gerard's side of the table. Steve had his own little bubble of time though and killed it with Fiery Temper. Matt kept on bashing with morphs and the Jersey Boys fell to 20. Magus of the Jar came down from Matt. 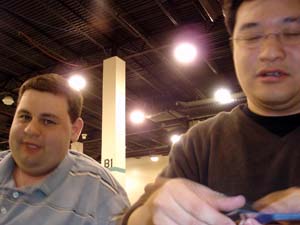 Gerard played and flipped Fathom Seer while Ziegler banged in with a Fury Sliver-enhanced Bonesplitter. Quilled Sliver from Gerard and an alternate casting cost Snapback on the Magus concluded the sudden shift in game balance. Steve was far from out of gas and Rift Bolted the doublestrike source to death. Magus of the Jar made a second appearance.

It was now all red cards all the time for Ziegler and he paraded a Dragon Whelp out for Steve's approval. They awaited the thumbs up or down from the tyrannical former PT winner and he turned it down with Hammerheim Deadeye. Matt sent in a lone morph and after much debate Ziegler opted to put his Bonesplitter in the path. Before damage they shot it twice but it was a Slipstream Serpent and they ultimately traded.

Pulmonic Sliver from Gerard and a Battering Sliver from Ziegler let the Quilled sneak over for one point of damage. Steve and Matt were not done with their hateful ways though as Steve cast Tumble to smoke the slivers. They let the Quilled one die but put the other two on top of their respective libraries. Matt popped the Magus and in the end they went to the bin with their other six cards. Matt netted a Malach of the Dawn and a mystery guy in the process. 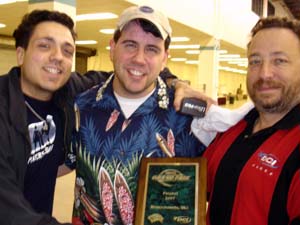 Synchronous Sliver for Gerard and Acid Moss for Ziegler were their next plays but Steve and Matt kept coming with the red Totem, a morph, and Malach. Gerard put his guys in the way of the morph and Aquamorph Entity claimed a sliver with its dying breath.

Spined Sliver tried to stem the bleeding for Ziegler while the Jersey boys bickered about how to get out of the mess they were in. Steve activated his Totem and Gerard used Voidmage Husher to counter the activation but Matt had Draining Whelk. They fell to eight on the attack and were staring down the barrel of a 5/5 flier. They looked at their next draws and extended their hands to the Grand Prix Massachusetts Champions.