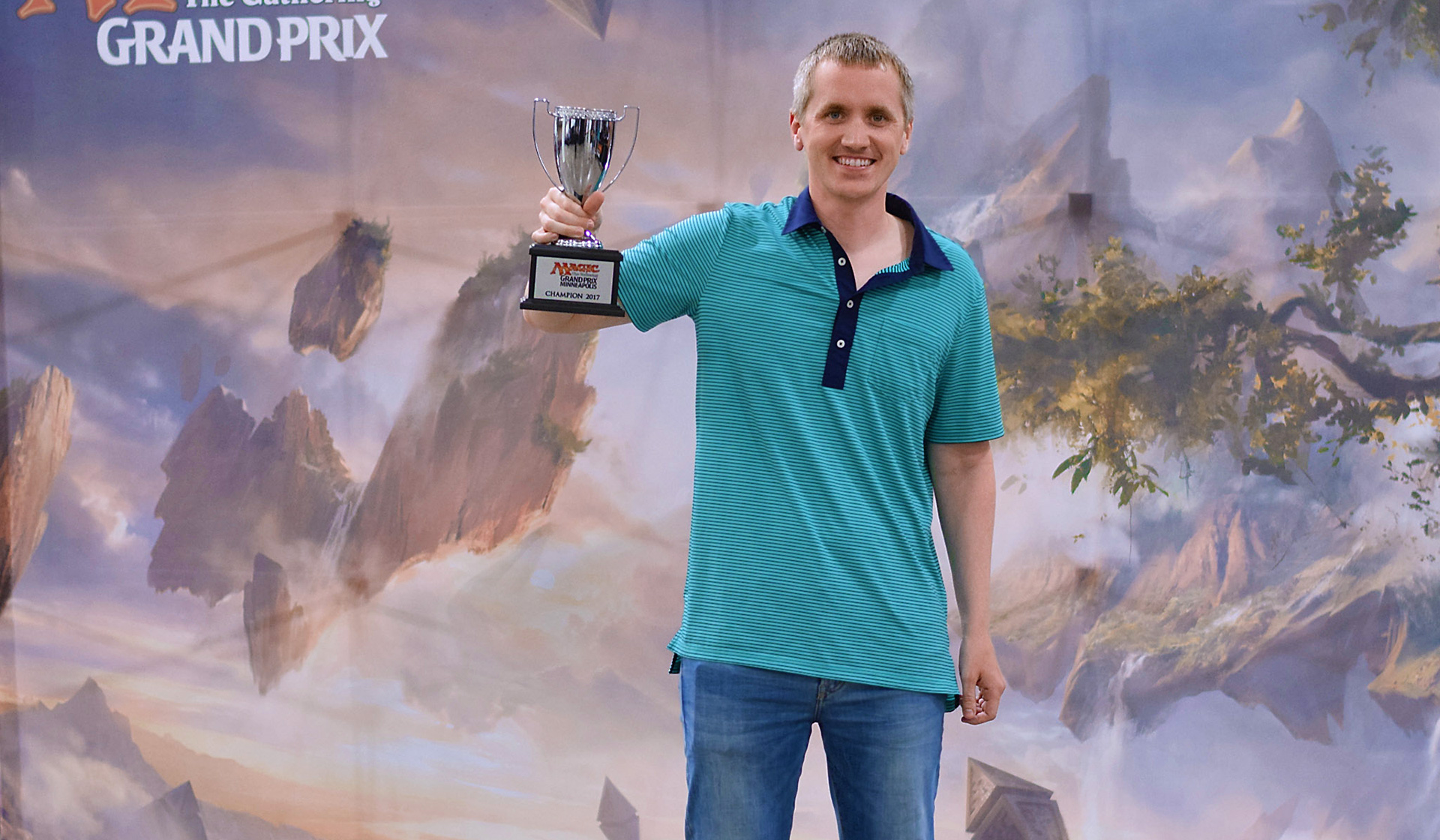 THE HASHTAG FOR GRAND PRIX MINNEAPOLIS IS #GPMINN. JOIN THE CONVERSATION.

Fifteen rounds of Swiss and a Top 8 weren’t enough to topple Steve Locke, whose Mono-Black Zombies took on all comers, ending with a decisive finals victory over Corey Baumeister to wrap up an undefeated trophy run at Grand Prix Minneapolis.

In a format that was dominated by Ramunap Red at Pro Tour Hour of Devastation last week, players came to Minnesota ready to fight back against the red menace. That’s exactly what happened, as just one Red deck made the Top 8, while the top tables were filled with the undead hordes.

But no one led them better than Locke, who battled two days without picking up a loss and won a Top 8 that was also highlighted by the brother duo of Brad Nelson and Corey Baumeister, who became just the third pair of siblings to Top 8 an individual Grand Prix alongside each other.

It was an exciting and drama-filled Top 8, but it was Iowa native Locke who stood tallest. Congrats to the winner of Grand Prix Minneapolis!

Ramunap Red players must have spent too much time in the Sunscorched Desert, because the wins seem to be drying up. After a commanding performance at Pro Tour Hour of Devastation, the...

As the Top 8 began, we saw a format very much shaped by the dominance of Ramunap Red at Pro Tour Hour of Devastation last weekend. The two decks with perceived positive matchups against Red –...

After Ramunap Red's dominance at the Pro Tour last week, it was widely assumed to be the deck to beat coming into Grand Prix Minneapolis. And it was certainly beaten this week, as a horde of...

The Top 8 is more than just a pile of cards. It's the players that piloted those decks and weathered the ebbs and flows of a two-day tournament. Here are the players who performed well enough this...

It began with more than 1,125 players and a fear of Ramunap Red, which dominated Pro Tour Hour of Devastation last week. But Day One at Grand Prix Minneapolis ended quite differently, as the top tables in the final round kicked off with nary a red deck in sight.

Instead, three decks rose to the top: Black-Green Constrictor, Mono-Black Zombies and Mono-White Eldrazi finishing 9-0 in the hands of Daniel Weiser, Steve Locke and Jonathan Job, respectively. Also of note are two Sultai Reanimator decks that finished the day at 8-1. Mono-Black Zombies emerged as the deck to keep down mono-red, while the Reanimator deck burst onto the scene and preyed on the slower decks all day.

All players with 18 points or more will return for Sunday competition, as six additional rounds of Standard will pave the way to the Top 8, where we will see the next evolution of the shifting Standard format and crown the winner of the first event of the 2017-18 season.

You can follow it all live; coverage begins at 9 a.m. local time at twitch.tv/Magic.

It's been two years since a Mono-Red Aggro deck won a Pro Tour. Two summers ago, Joel Larsson displayed his prowess with Monastery Swiftspear, Abbot of Keral Keep, and Stoke the Flames, but once...

Eleven players won some coveted byes in our Last Chance Trials yesterday, and the nine Standard decks below give us a snapshot of what we can expect to see this weekend. Ramunap Red continued its...