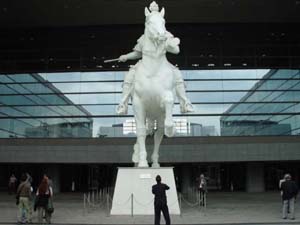 It's the fairy-tale ending P.S.2 (Poor Shark 2) were hoping for but didn't dare expect. Masahiko Morita is a three-time limited Grand Prix Finalist. Masashiro Kuroda has multiple Top 8's. Katsuhiro "Twitchy" Mori was Rookie of the Year but has no other title to his name. Last year, Kuroda and Morita came close. The original Poor Shark (Mori is substituting for an absent Tomomi Otsuka) made the finals of Grand Prix - Yokohama but lost to ABU. They came to Nagoya for vengeance. Also enjoying a weekend beyond expectations were S.S.D. (Naoki Kabouchi, Shuuhei Nakamura, Kimio Imai) They seemed out of their depth in the Top 4, but wowed spectators by defeating captain Nakamura's former mentor, Tsuyoshi Fujita and his team N.G.O.K. They were also eager to take the title. The draft seemed to favor P.S.2 overwhelmingly, but in the play of it it all came down to game three between Morita and Kabouchi. But you cannot deny destiny. Morita's deck performed like the game was a formality. As he turned sideways for the final four points, the crowd erupted in cheers and he was mobbed in his chair by some of the biggest names in Japanese Magic. The dream had come true. P.S.2 were champions!

"If you were to play in Nationals today, what Standard deck would you use?"