Grand Prix New Jersey was the swan song of Ixalan. Though the tribes we love will be back soon in Rivals of Ixalan, it marks the end of the Grand Prix calendar year, and the end of the Limited monstrosaur. This weekend saw exciting events that rounded out the 2017—from some serious déjà vu, to a fourteen-land Fabiano special, to a giant professional wrestling mantis droppin' elbows all up in here like she was Cactus Jack. Bang! Bang! 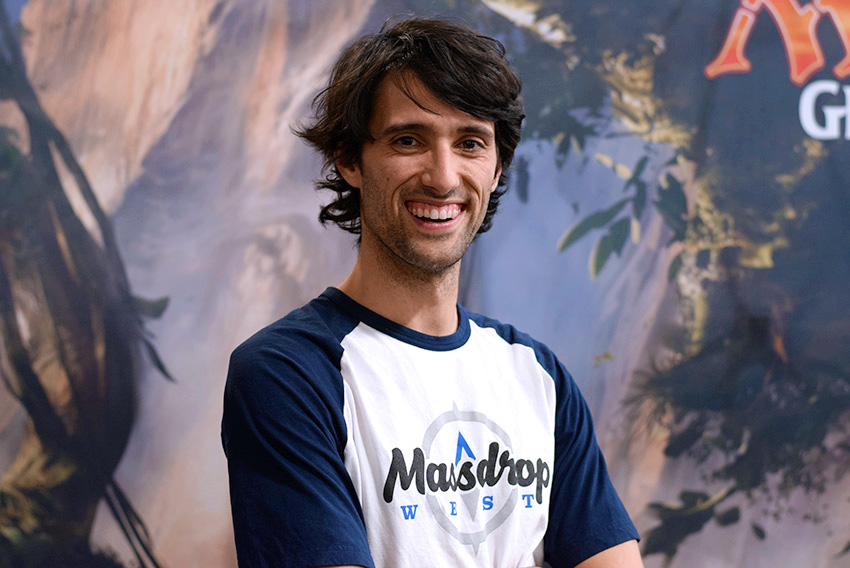 Team MassDrop West member, Californian Eric Severson is no slouch. With five Top 8s under his belt, he's certainly been around the block. But it doesn't always come easy for him in the final rounds.

Severson has 9-0 Day One's out the wazoo—this weekend made four—but each time, the wheels soon fall off. In this very room last year, Severson went 9-0, then then didn't win another match. He even went 8-0 at Pro Tour Battle for Zendikar, but finished a (relatively) disappointing 36th.

But he's always shown the will to improve and push through. Though he didn't get to the Top 8 this weekend, he finished 10th. "Only slightly behind my expected wins in Day Two against reasonable opponents," Severson said. He was in the feature match area all day, and after a rocky 1-3 start, he bounced back to finish two slots out of the spotlight. He stuck to it, preserved, and earned himself a great finish. 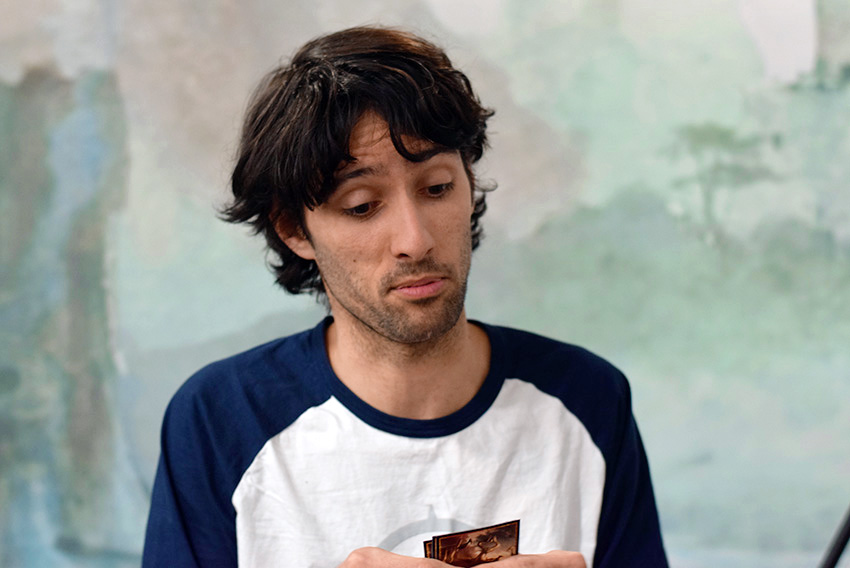 Severson's come a long way from the days nearly two years ago when he snapped his six Grand Prix Top 8–win-and-in loss streak in Vancouver 2016. Even though he's finishing up graduate school and getting married this year, he's turning in consistent results in almost every Grand Prix ... even if it's a bumpy ride getting there.

Hungry Heart: Nicholas Mohammed's Vampires, and Getting Over His Jitters

Floral Park, New York native Nicholas Mohammed was not the likeliest of candidates for a Grand Prix Top 8 finish this weekend. In a bracket filled with former Players of the Year, World Champions, National Champions, Grinders, PTQ End Bosses, and a three-time-Grand Prix–winning grizzled Jersey veteran who plays 14-land draft decks way too often (that one's Gerard Fabiano), Mohammed stood out like a Michael Bay film at a Goddard festival. He was noticeably worried about his first feature match.

But Mohammed had an ace up his sleeve—he had begun forcing Vampires in Ixalan Limited on Magic Online, and he got quite good at it. So good, in fact, that he won his last six competitive queues in a row leading into the event! 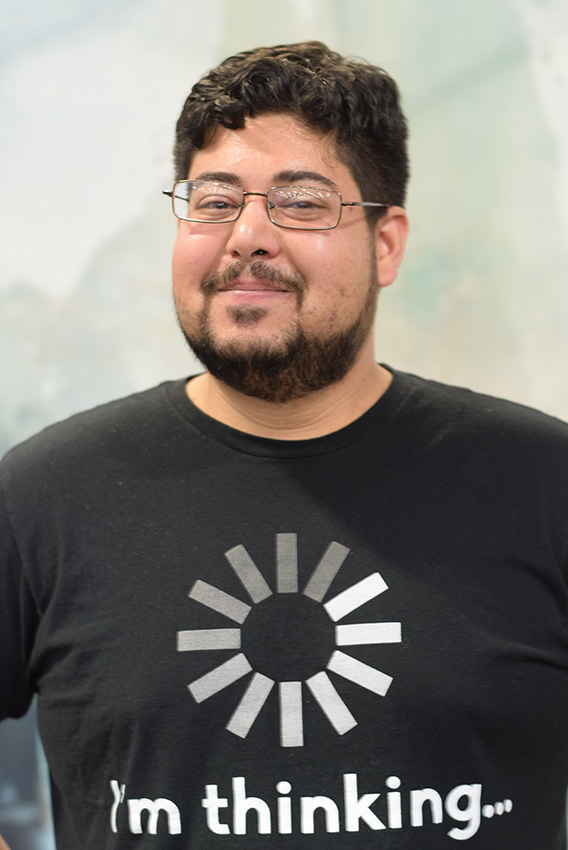 He knew what he was doing in the format, and this weekend he executed it almost to perfection. By the third time he was called to the camera, for a Round 15 win-and-in, Mohammed was like an old salt, he sauntered up and rolled into the Top 8 like he was born for it.

Though he lost in the quarterfinals to Gerard Fabiano, Mohammed had already broken through. After the match he said that though his head was a bit "fuzzy" from all the Magic, he was already looking forward to the Pro Tour.

Meeting Across the River: Déjà Vu in the Meadowlands

There were some funny coincidences over the weekend that harkened back to the Grand Prix New York back in 2016 in the same event center. (Yes, this area of New Jersey is often referred to as New York—it happens. Both the New York Giants and the New York Jets football teams both played here in Jersey. I know; it's weird. Fuhggedaboutit!)

After the first day, both Eric Severson and sixteenth-ranked Mike Sigrist had run back the same 9-0s they had at New York 2016. And this was only Sigrist's second 9-0. Additionally, Sigrist's wife Heather isn't often seen at events, but she came to both GPs. "I rarely lose when she's in the room," Sigrist said. 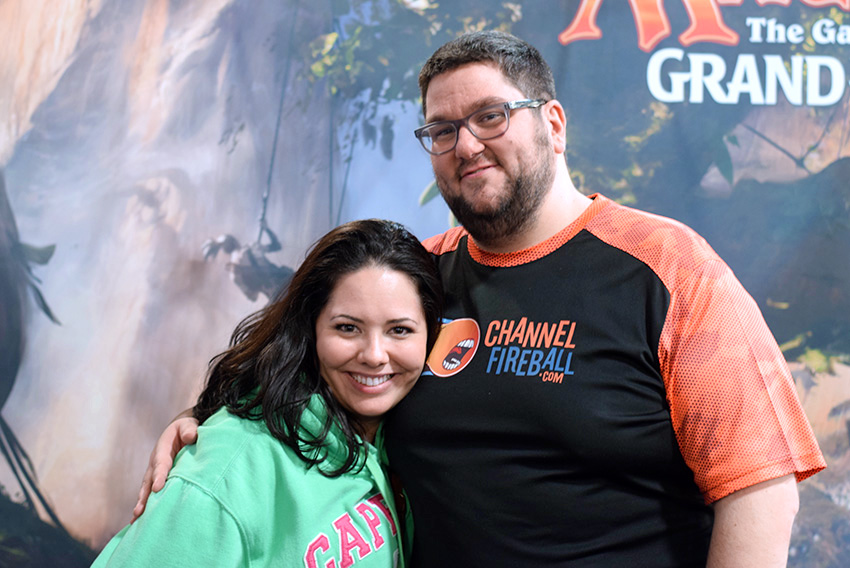 But in a much bigger repeat moment, both Sigrist and former Player of the Year, first-ranked Seth "Didn't I Just Win a Pro Tour?" Manfield finished in the Top 8. This wasn't just a repeat of New York, but also Pro Tour Ixalan just a short time ago! 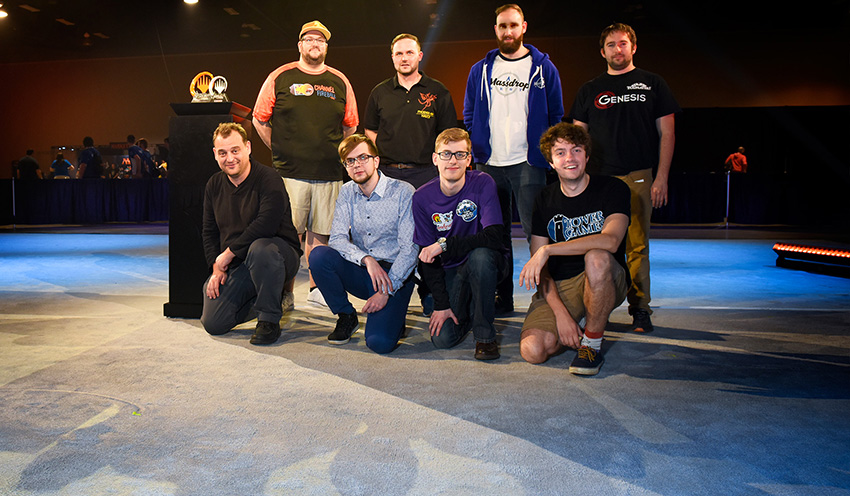 I know what you're saying: "Doesn't Seth Top 8 every GP?" And, yes, he does. But still, even with two skilled Magic players—and one of them being Seth "Perennial #1" Manfield—the chances of that happening are quite slim. This is the only Grand Prix Top 8 they shared, despite having many to their names.

And in yet another coincidence, Seth "Can We Invent a Ranking Better than #1?" Manfield was also the top-ranked player when, going into the finals of New York, just like here in New Jersey.

It was déjà vu all over again.

"Ladies and Gentleman, it is now dark outside. I repeat, it is dark outside." - Unstable Judge Steven Zwanger, over the #GPNJ sound system. #MTGUn3

Charles Featherer might be a mild-mannered New Jersey judge during the week, but this weekend, he's transformed into "Dr. Judge," the official enforcer of the Unstable drafts that have been going on all weekend at the Grand Prix. Donning a double-magnifying jeweler's loupe and a professor's lab coat, he helps maximize the fun elements of fun regulation in Unstable.

Magic's newest "Un-" set (following Unglued and Unhinged) is a bona fide hit, a whack on the side of the head. But playing it at large events must be taxing—well, not for Dr. Judge.

(Spellman) "Judge! I've given his opponent my glasses. Is that outside assistance?" #GPNJ unstable side events

"It's been a blast!" Featherer said. "There's nothing quite like this set. The drafting is so good, even people who don't think they'll like the set love it."

As far as getting ready to judge an event like this, Featherer said, "I read the FAQ front to back, and back to front, but there are still questions it just doesn't answer." So there's a lot of "judicial discretion" as they say in the legal world, and "fun wiggle room" as they say in the lands governed by the Earl of Squirrel.

Featherer said, "Best question so far today was 'If I use Phoebe, Head of S.N.E.A.K. to steal the text from Knight of the Widget, does it die?'" The call from the floor was yes it does. 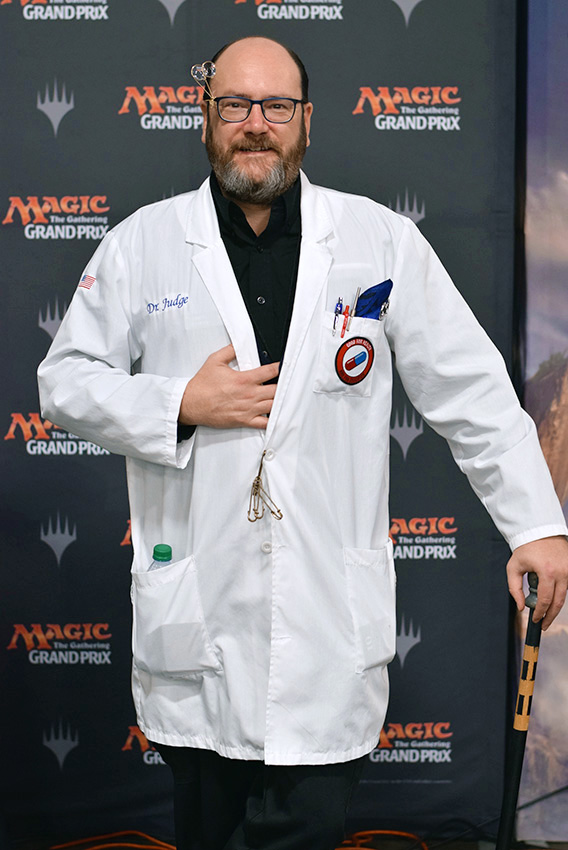 But tons of other things come up. I heard tell of a Skull Saucer requiring a head to be on the table, but a Slaying Mantis requiring a distance of three feet. The outstretched arms of the player weren't the required distance, so he had to choose between the Saucer or the Slayer.

The Slaying Mantis has been the cause of much consternation and calamity. "I had to settle a disagreement on whether the Mantis touched a card or not," Featherer recalled. "How do you even do that? Do they rethrow the creature?"

This mayhem was even more heightened after the two FULL BOX SEALED events of Unstable. Just thinking about that makes my Brain in a Jar hurt. Moar Packs, pls.

It's crucial to know the cards, the interactions and the rulings as a judge, but getting in on the fun of #MTGUn3 is just as important! #GPNJ pic.twitter.com/XbiTtQCkNW

From the likes of it, Unstable has been a Grand Prix grand slam here in New Jersey. And plus, the main event got to hear a judge announce over the loudspeaker "It is now dark," so players with Old-Fashioned Vampire could know what was going on. Who doesn't love the intersection of rules and fun?!

Reminiscent of his crazy-pants antics during the Theros block drafts (sometimes going all the way down to 10-land(!)), three-time Grand Prix champion, New Jerseyan Gerard Fabiano cruised to a 3-0 in his first pod with a fourteen-land Red-White deck.

Though fourteen lands is not totally unheard of in this format, watching Gerard slowly tick his land count down could be a portent—if Ixalan Draft had any more Grand Prix ahead. Fabiano won Grand Prix Montreal with a Red-White deck with a more traditional land number, then just started cutting in future drafts. 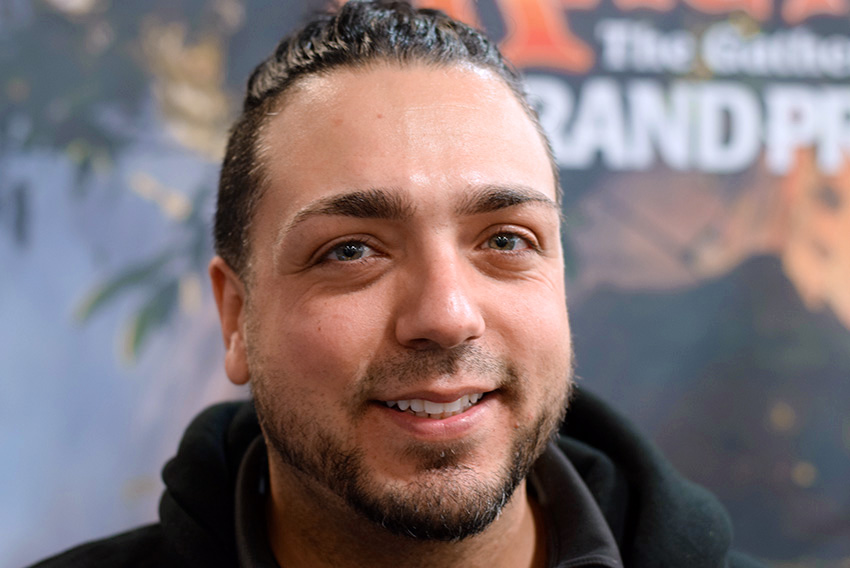 This first-Draft 3-0 was particularly important to Gerard, as he started the tournament at 3-2. After Round 5 he didn't drop a match until the Top 8. He slowly marched up the rankings each round, thanks to that great rallying win streak. And the last time he was on a 3-2 heater like this, he won Grand Prix Baltimore in 2015.

Though his dreams ended in the semifinals, losing to  first-ranked Seth "Somebody, Please Help Me, I Just Can't Lose at Magic! Why Won't Anyone Help Me?! Please. Somebody." Manfield, Gerard did it his way: with a 15-land Red-White deck. 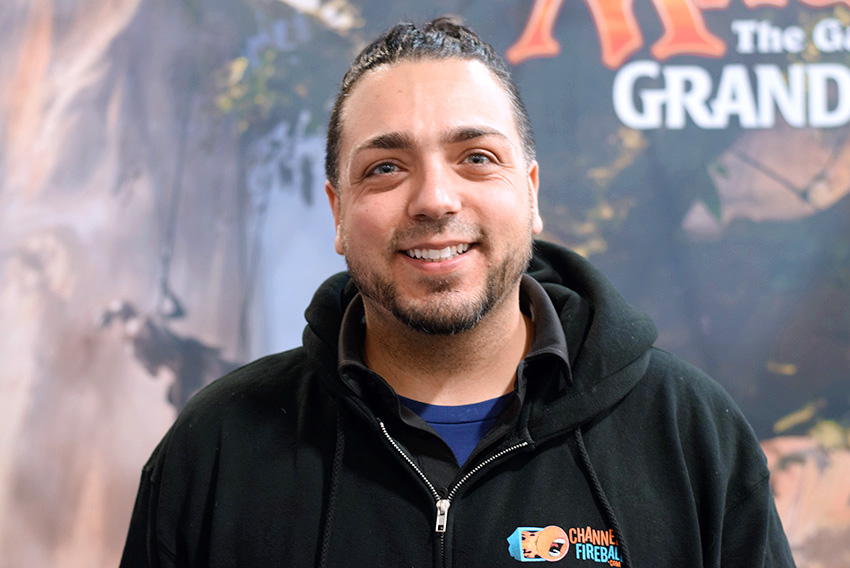 With all the craziness going on during the Top 8—what with (16) Mike Sigrist, Valentin Mackl, Gerard Fabiano, and Seth "The Man-field" Manfield hogging up lots of the light—there was little chance that anyone would fight through the canopy.

Then came Kale. Kale Thompson's had a heck of a Magic year. After becoming Canadian National champion, and refusing to quit Magic despite saying so...

Kale is also the nut. https://t.co/2CfUr6uFCZ

...he's now a Grand Prix champion too! (Oh, it's a heck of a non-Magic year too, as he's celebrated his first anniversary.) 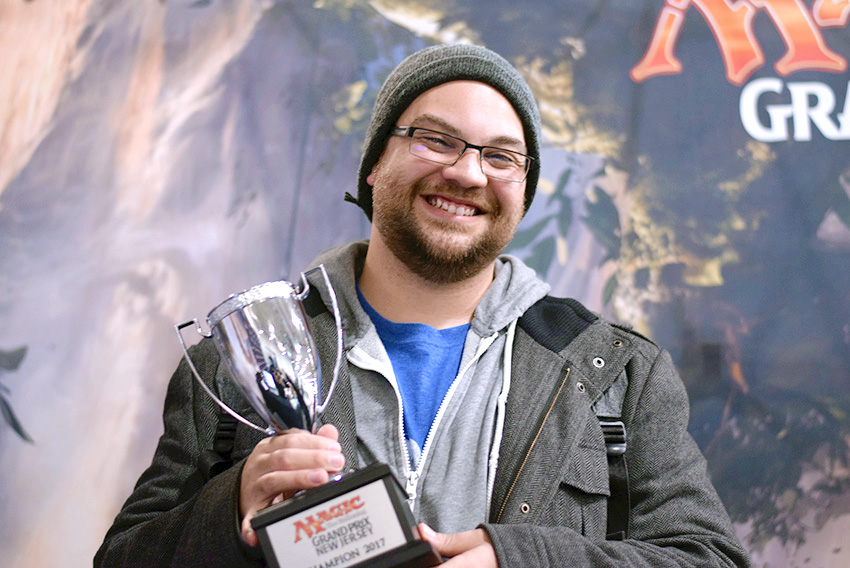 Combined with Grand Prix Singapore also this weekend, that makes two National Champions who've translated that success to the circuit.

Thompson wasn't quite confident in his Top 8 draft, having to rely on some less-than-stellar filler, but he piloted it to perfection, and took down those nasty pros in the process.

The moment of the Top 8 had to be when he used Dinosaur Stampede in the third game against (16) Mike Sigrist to knock him out of the tourney. And when Sigrist flipped over his next card—it was Settle the Wreckage.

After his loss, Sigrist flipped over his top card and revealed Settle the Wreckage. More like Settle for Wreckage. pic.twitter.com/JkN5goGnvw

I think it's safe to say, Kale will be playing Magic for at least a bit longer after this weekend.