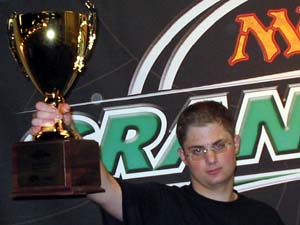 For Kibler's part, he prevailed over Jan Holland and his U/W Cog Control deck in three grueling games in the quarters before trampling former U.S. National Champion Eugene Harvey in the semis. Unfortunately for Brian, his luck ran out facing Garza. Kibler was a hairsbreadth away from killing Garza in both games 1 and 2, in spite of some particularly poor draws from his deck including a double mulligan in game 2. Kibler's dream of a third Grand Prix title was not to be, however, as Garza Tooth and Nailed his way to his first Grand Prix victory.

Other stories on the weekend included five Affinity decks in the Top 8, Alexandre Peset taking a lead in the Rookie of the Year race, and the arrival of Gabriel Nassif's G/R Tooth and Nail deck, which placed three players in the top 9 of the tournament.

After starting with 958 players, and cutting to 128 after 9 rounds of swiss, six more rounds of swiss today cut the field down to eight players, and what an eight they are. Remie, Harvey, Kibler, and Rookie of the Year leader Alexandre Peset provide the star power to this top 8, while Adam Horvath (mostly known for excellent finishes with his fellow Team TOGIT members) is having a breakthrough solo performance, and Jeff Garza is continuing a string of outstanding finishes that started with his JSS Championship, and has also resulted in two Grand Prix top 8s in as many months.

Thirty-eight Vial Affinity players made Day 2, with a stellar five of those players finding a place in the Top 8. The other deck story of the tournament was a G/R deck, but not the G/R deck everyone expected. Freshmaker (as the Affinity hate deck has been named) did have a strong performance, but it's the G/R Tooth and Nail version designed by Gabriel Nassif that placed three more players in the top 9. The final deck in the top 8 is a fascinating U/W Cog Control deck piloted by relative unknown Jan Holland to first place after the swiss standings.

The 15th and final round of Grand Prix: New Jersey has begun and there are five Affinity decks guaranteed a spot in the Top 8, with Jeroen Remie, Eugene Harvey, Adam Horvath, and Brian Kibler all clinching spots by riding Affinity's coattails. Aside from Affinity, the other huge story this weekend is the success of G/R Tooth and Nail. Alexandre Peset has piloted the Gabriel Nassif designed deck into the Rookie of the Year lead, and a share of the Top 8. Joining him on the G/R Tooth bandwagon is JSS Champion Jeff Garza, making his second appearance at a Grand Prix Top 8 in as many events.

The last slot is riding on the outcome of a match of rogues, where Jan Holland's U/W Cog Control deck is facing Josh Rider and his U/R Control deck. If Holland wins, he will go into the Top 8 as first seed, while if Rider is victorious, he will slide into the Top 8 on superior tiebreakers. Chris McDaniel, an 18-year-old amateur from Richmond, Virginia (and official Knutian barn) drew himself into the top amateur prize and 9th place, while sealing Kibler's umpteenth Grand Prix top 8. Chris is also playing G/R Tooth, a deck he audibled into on Friday night after Kibler suggested it had a better matchup against Affinity than G/B Tooth.

I, for one, am not remotely surprised by the showing of Affinity, though I have been very impressed with how well the G/R deck can handle what many have deemed to be the most synergistic mechanic ever. The only real question left is whether any pros will shy away from the Affinity decks before Worlds because they fear the hate.

This Grand Prix is being held at the Rexplex Sports Complex in Elizabeth, New Jersey. It is a huge facility with basketball courts, indoor and outdoor soccer fields, a skate park, video game arcade, concessions, and even bumper cars. Its ample size was still limiting to the 958 competitors on day one. Despite multiple hurricanes developing on the East Coast limiting travel, this event set the record for North American Grand Prix competitors. This huge turnout broke the previous record set in the spring by GP: Columbus by over a hundred. The trend in North American Grand Prix is for the West Coast and Southwest to have about 300-400 players, the South around 500, and the Northeast and Ohio Valley have anywhere between 700-1000.

Brian Lynch and Melissa Detora two players currently competing in day two. Melissa is the only woman playing today, and one of the most successful female players in the game, having played at US Nationals recently and a Pro Tour earlier this year. Brian has played in about a dozen Pro Tours and is a seasoned veteran. The couple from Rhode Island is playing identical Blue/Green control decks to great success thus far. Both easily advanced to day two, and are doing well again today. They feel their U/G deck is very versatile and has good game against all the decks in the format. They also like the fact that the deck gives them a lot of flexibility with card choices and that it allows them to outplay their opponents.

Deck Surprises
Yesterday we told you that Affinity was widely considered the deck to beat by all the pros, but many of them have given grudging respect to a series of roguish designs this weekend, all of which feature Red. The latest version of the R/G Freshmaker deck, a deck designed to crush Affinity while still having game against the control decks of the field, placed a large ratio of players running the deck into Day 2.

The other G/R deck getting a lot of raves is Gabriel Nassif's Tooth and Nail deck. Nassif gave the deck to David Rood and Alexandre Peset, and as of Round 12, all three players were still in contention for the top 8. The deck only splashes red for Electrostatic Bolt in the main, but after sideboarding it has an incredible amount of hate for Affinity decks and plays particularly well against the rest of the field. Unsurprisingly, it looks like Nassif has come up with yet another winning Constructed deck.

The last new deck that is making waves this weekend is the U/R "Cheesequake" deck (and you thought Freshmaker was a bad name) currently be piloted by Josh Rider. Most pros scoffed at Josh' deck yesterday, but no one can scoff at the results.

The Player of the Year Race
Nassif, Remie, Eugene Harvey, and Kai are all at or near the top tables, as they look to lock in extra points before Worlds. Alexandre Peset has also had a strong tournament, as he tries to gain a sizeable lead on Japanese players Kazumasa Shiki and Tomohiro Kaji before competing against them in San Francisco.