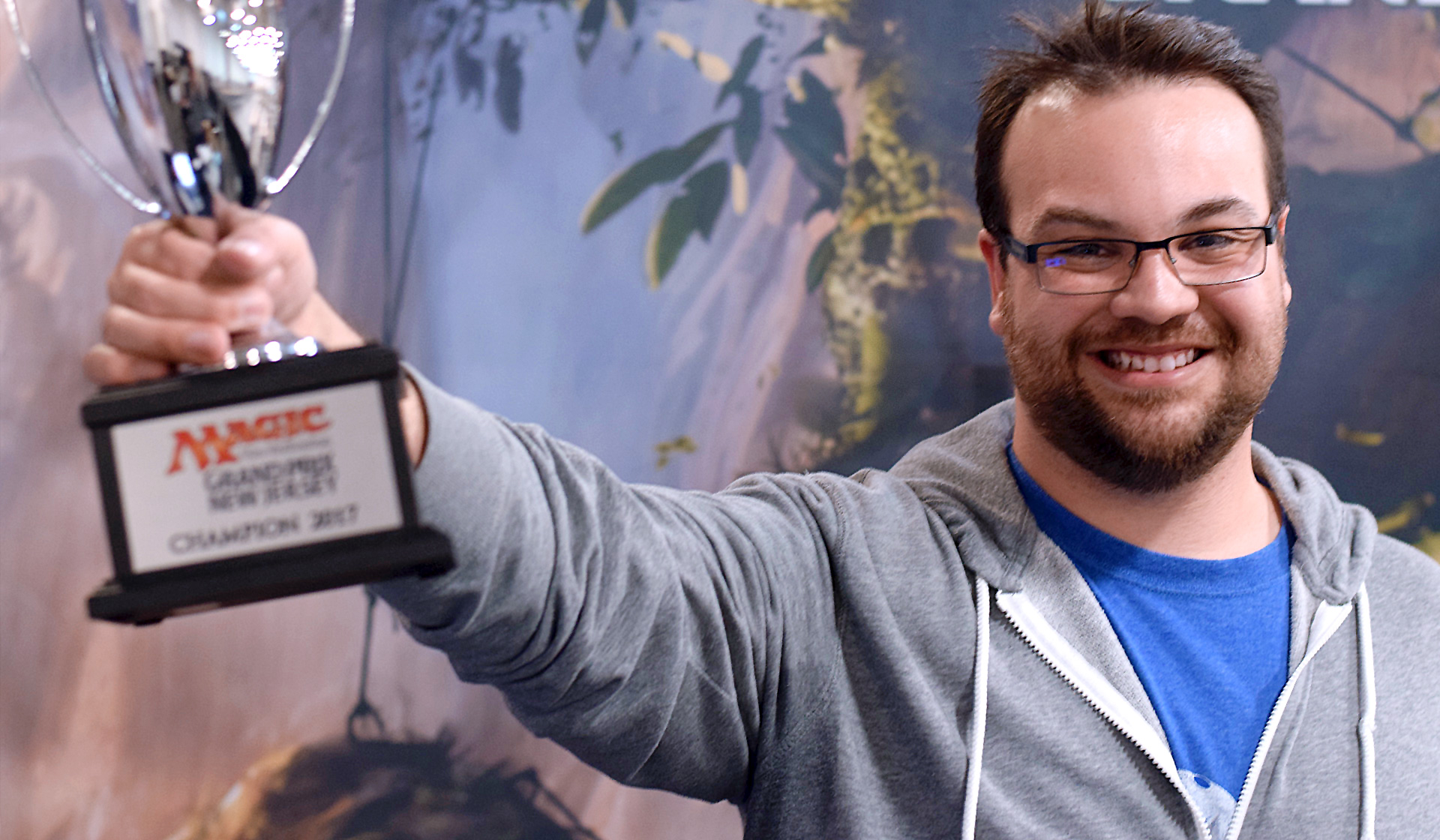 The reigning Canadian National Champion Kale Thompson has boned up his bona fides, taking down both (16) MIke Sigrist and (1) Seth Manfield in the Top 8 to take home the New Jersey trophy!

THE HASHTAG FOR GRAND PRIX NEW JERSEY IS #GPNJ. JOIN THE CONVERSATION.

What a weekend in the Meadowlands! In the last Grand Prix of the year, and the final bow of Ixalan Limited, all the stops were pulled. The players raced full speed through the channels to wind to the Top 8, and what a crazy, stacked Top 8 it was! In the end, pros like (1) Seth Manfield, (16) Mike Sigrist, Gerard Fabiano, and Valentin Mackl fell by the wayside on Kale Thompson's route to the top. The 2017 Canadian National champion, now Grand Prix champion, and a connoisseur of a good Dinosaur Stampede. He used it to take down Sigrist in the semifinals, before beating out Seth "The Once and Future #1" Manfield in the finals.

Though Rivals of Ixalanwill be the next time we have some good one on one Limited Grand Prix action, we won't have to leave the amazing Ixalan land of Dinosaurs, Pirates, Vampires, and Merfolk! So everybody rest up, and ready for the rivals in the new year. See you soon!

Want to see what rose to the top of Grand Prix New Jersey? Then take a look at the Top 8 competitors' decklists! ...

Learn more about Grand Prix New Jeresey's Top 8 competitors—including who they are, what they've done in the game, and more—by taking a look through their profiles! Name: Daniel...

Playing nine rounds of Magic well enough to go undefeated is one thing, but even just making sure you Sealed pool is build correctly can sometimes be even harder! Here are the four decks from Day...

We're closing in on the last day of 2017 Grand Prix—the first nine rounds of Grand Prix New Jersey have come to a close. With 1,135 players battling, the day ended with four players on perfect records:Eric Severson, (16) Mike Sigrist, David Schnayer, and Malcolm Kim. This was a deja vu moment for Severson and Sigrist as two years ago, they had identical records in this identical venue. While Sigrist would love to repeat his Top 8 performance from Grand Prix New York 2016, Severson hopes to reverse his past—as last time, he didn't win another match.

We've been taking a winding path through Ixalan Sealed today, and the route is clear tomorrow: It's time for Draft. These four may be on top now, but plenty of players are chasing them to earn their right to be in the Top 8. Join us tomorrow at twitch.tv/magic for all the pirates, dinos, merfolk, and vampires you can handle! See you then.

It's the most wonderful time of the year, everybody! And in New Jersey the weather couldn't be more in-season. There's a light snowfall on the ground, but not enough to make it stick around when...