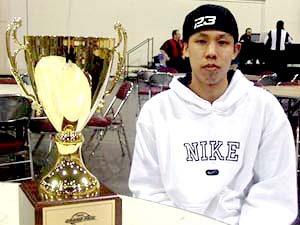 The former Pro Tour Osaka Champion won his first individual Grand Prix title at the helm of a nasty mono-black draft deck that featured triple Consume Spirit and triple Chittering Rats. He was also sporting a nasty arsenal of equipment including Bonesplitter and the bombtastic Skullclamp. If that wasn't enough he also had Promise of Power.

He played an agonizing match against Ben Rubin that took all three games and stretched out for the better part of two hours. His Murderous Spoils killed one of Ben's key creatures and netted him an ersatz Bonesplitter (it was actually a Sculpting Steel) in the rubber game of the match. Ben came up one mana short of being able to play and equip his Loxodon Warhammer on his final turn of the game and Ken advanced to face Ian Spaulding.

After Ken won Game 1 the two players had a slugfest in Game 2. An early Razor Golem pounded Ken. Ian seemed to have all the answers. A timely Shatter killed a Pewter Golem and Stir the Pride turned a double block into a massacre. With the board in a neutral state Ken drew five cards with Promise of Power and finished off a stunned Spaulding with a pair of double digit Consume Spirits.

Dave Humpherys had ripped through his bracket before Ben and Ken had even finished Game 2 of their quarterfinal match. His deck was generally accepted to be the least exciting of the Top 8. Somehow he dispatched some formidable opponents including Gabe Walls and Mike Turian with his cobbled together deck.

Ken Ho slaughtered him in a brutal two game set. The first game saw a pair of Chittering Rats lock down the YMGer when he missed his third land drop. In the second game a Scimitar and a Bonesplitter equipped a turn two Slith Bloodletter. Dave's first play was a turn four Clockwork Condor-it was not enough.