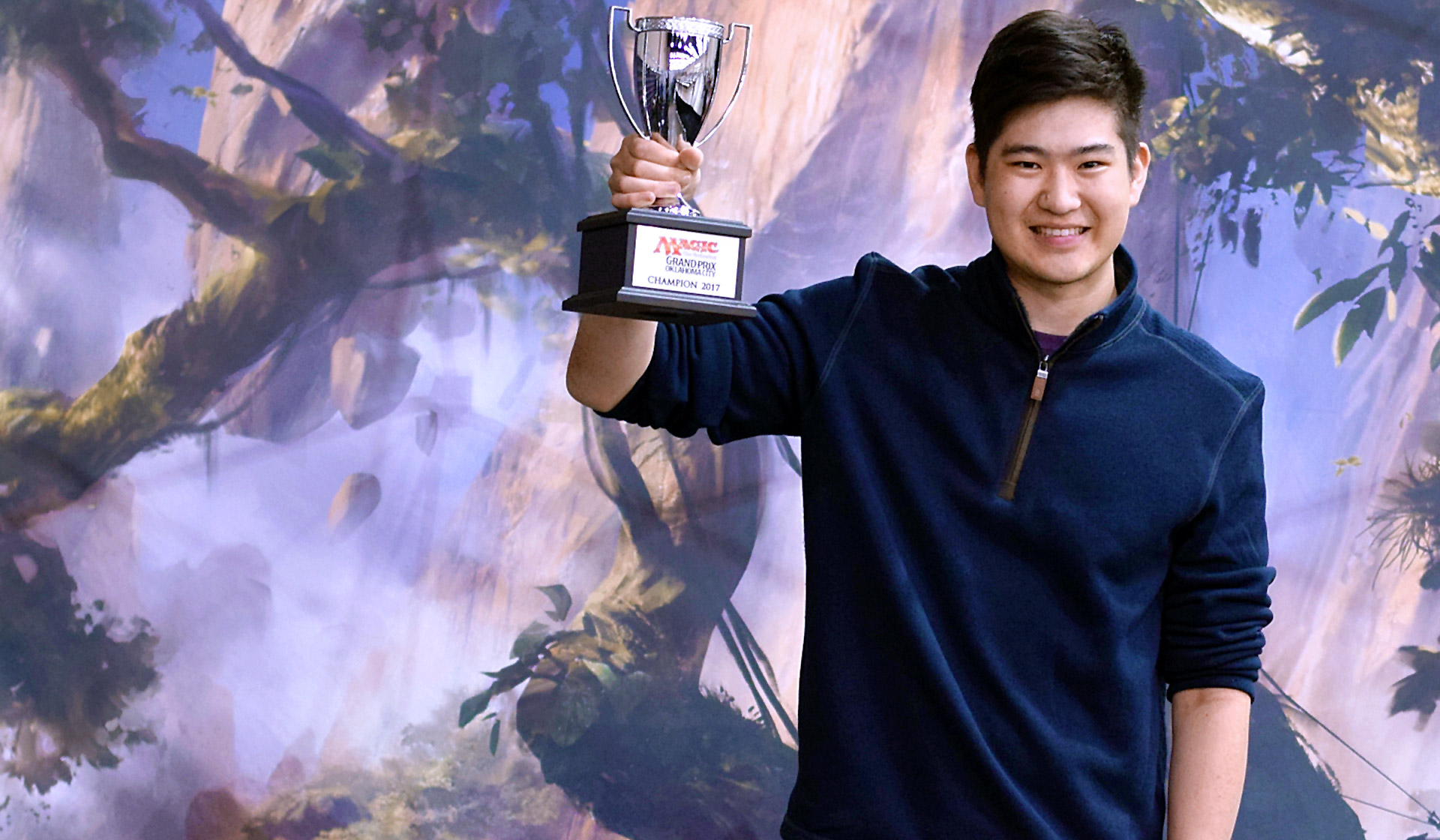 THE HASHTAG FOR GRAND PRIX OKLAHOMA CITY IS #GPOKC. JOIN THE CONVERSATION.

Modern made its return to the Grand Prix circuit after a several-month absence, and the shockwaves reverberated throughout Oklahoma City. In a display of how much people enjoy the format, the event capped out early at 1,400 players and excitement was high throughout the convention hall all weekend.

Lantern Control was the resurgent deck coming into the tournament – and Lantern mastermind and defending GP OKC winner Zac Elsik went undefeated on Day One with the deck – but after the strong start it was Tron variants that ruled the weekend - but it was another big mana deck that took it all down in the hands of Larry Li.

Progressing through a stacked Top 8 that included Pro Tour Ixalan winner Seth Manfield, Li Scapeshifted and Valakuted his opponents, culminating in a finals mirror match against Adam Pannone. It was a hard-fought match that came down to the final game, but with an attack of a Primeval Titan, 18 damage from Valakut and combat damage from the Titan Oklahoma native Larry Li defended his home turf, earning the title of Grand Prix Oklahoma City champion along the way.

It began with almost 1,400 players converging in the nation's heartland to battle it out in Modern competition. It ended with Larry Li holding the trophy high, as he and his Big Mana decks took...

Grand Prix Oklahoma City marked the return of Modern to the Grand Prix level after a several month hiatus. We saw it all in OKC, from Tron to tribal and everything in between. Here are the decks...

It's not just about the cool decks that make the Top 8 – it’s the players piloting them. These eight players fought through 15 rounds of swiss and everything the Modern format could throw at...

Modern is one of Magic's most diverse formats, and that diversity was on display in the Top 32 lists – though there were plenty of the pre-tournament favorites here as well. Here's how the...

Zac Elsik did it again. For the second Grand Prix Oklahoma City in a row, the Lantern Control mastermind took on all comers and walked away unbeaten. Nearly 1,400 players came to the nation’s heartland to battle in Modern, but it was the defending champion who paced the field yet again. The resurgence of Lantern Control was perfectly fitting as Elsik returned to the site of his Grand Prix title in 2015.

Can the Dallas native repeat? Only Sunday competition will answer that question, but he will face plenty of competition. He’s joined at the top by four other players – Joshua Hoffeld, Patrick Tierney, Julian John and Nathanael Perigo – who all enter Day Two in pole position with a great shot advancing to the Top 8 and playing for the trophy! Lurking just behind them are a handful of pros, with Seth Manfield, Steve Rubin and Hall of Famer Eric Froehlich finished Saturday play at 8-1, and are squarely in the mix heading to Sunday.

With the Modern format finally on display once again, anything can and will happen as we battle down the home stretch. You can follow all the action at Twitch.tv/Magic.

Nearly 1,400 players arrived in Oklahoma City this weekend, and what awaited them was a format that has changed greatly even since its last Grand Prix level appearance in August. Modern is oft...