From Zombies to Spirits to Vampires to Eldrazi, we've seen a lot from Standard this weekend. Omaha will be remembered for the six Aetherworks Marvel decks that advanced to the Top 8, rebutting what had seemed like a buttress against the fearsome deck in other parts of the world – where the archetype had put just one copy into each of the Top 8s in Manila and Amsterdam – but there was plenty more to the event than just the Top 8.

Here are the stories that most stood out from Omaha.

Nelson Goes for a Run

It's safe to say that Brad Nelson is running hot. The 2010 Player of the Year and three-time Pro Tour Top 8 competitor entered Grand Prix Omaha on what can only be described as a heater. After a solid Pro Tour that inched him closer to the epitome of Magic pro play – the coveted Platinum status that comes with 52 Pro Points in a season – he lost his final round at Pro Tour Amonkhet that could have locked it up. That didn't slow Nelson, who won the StarCityGames Modern Open in Baltimore last weekend playing Grixis Death's Shadow. He renewed his commitment to "just playing the best deck" in Omaha this weekend, and came armed with an up-to-the-second version of Temur Marvel that was optimized for the expected field at the Grand Prix.

Did it ever pay off. Nelson took a loss in Round 14 of the SCG event last weekend, but quickly rattled off a perfect 9-0 start. When Sunday began on a similar streak, the thought of the 15-0 and then Grand Prix victory entered the picture. But unlike many in similar situations, Nelson wasn't interested in perfection.

All he cared about was winning.

That meant a double draw in the final two rounds of swiss to ensure both a Top 8 appearance and a clear mind when he got there. The decision paid off, as he stormed his way to the finals against Sam Pardee, stretching his run to 21 rounds without a loss before an epic finals match against Pardee that would decide whether that streak could reach 22.

Coming in to the three-Grand Prix weekend – there were events in Manila and Amsterdam as well as Omaha – Temur Marvel was undoubtedly the heavy favorite entering the weekend. On one side were players like Nelson who came armed with the best version of Temur Marvel they could build, while on the other set players like Pardee who brought decks with a plan to attack Marvel.

Following 18 rounds of Magic in the three cities, the picture remains blurry. While Marvel put just one deck into each of the Top 8s in Manila and Amsterdam, it had a heavy presence in the Top 32 and occupied six of eight spots in Omaha, including the winner.

That said, there were decks that found success against Marvel. Some players – like Omaha Top 8 competitor Will Craddock – played Temur Energy decks without the Aetherworks Marvel, gaining both an edge in the "mirror," as well as against players who might play suspecting a Marvel that never appeared.

Blue-Red Control also found success this weekend, especially in the hands of Benjamin Luft, who made it all the way to the finals of Grand Prix Amsterdam before falling to champion Lukas Blohon's Black-Green Constrictor deck.

A lot of the talk about Aetherworks Marvel revolves around how it is often a spin of the wheel. And, sometimes, it is. Ulamog, the Ceaseless Hunger can end games in a hurry, whether cheated into play on turn four or hard-cast several turns later. But Paul Dean has proven there's more to the archetype than fortunate spins.

The Canadian professional and Pro Tour Battle for Zendikar Top 8 competitor has proven he's no stranger to making peace with the Eldrazi overlords. Affable at the table and cheery whether he's winning or losing, Dean has had plenty to smile about in the past month. Sitting on just 25 points, he entered Grand Prix Montreal two weeks ago in need of valuable Pro Points to reach Gold (35 points) for the season. A Top 8 run there meant that a victory would have locked him for the highly sought-after status. Unfortunately, a loss to Kevin Jones in the finals meant that Dean wasn't quite over the hump, even if things had gotten a bit easier.

After Omaha, the sweat is over. Dean worked with Nelson to refine their Temur Marvel list in the week leading up to the Grand Prix, and it paid off hugely. Both Nelson and Dean advanced to the Top 8, and the repeat run for Dean means not only that Platinum is now in his sights, but that there is more to the archetype than spinning Marvel into Ulamog.

Nelson Return to the Summit

It's been a long time since Brad Nelson has felt what it's like to win a Grand Prix. He may be a household name in Magic, but Nelson hasn't hoisted a GP trophy in some time. His last victory came at Grand Prix Washington, D.C., all the way back in 2010, the year he won the Player of the Year title. 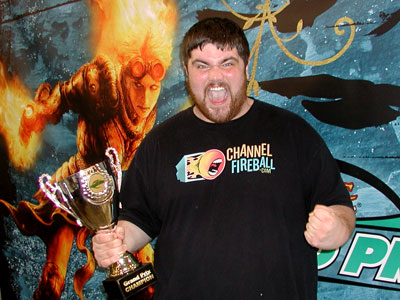 Known for his easygoing personality and fast humor, Nelson was uncharacteristically stoic during his finals match, the stress of the moment getting to him as he perhaps reflected on the multiple second-place finishes he's accumulated since then. In the end, it all came down to a final, deciding game against Sam Pardee for the title.

After losing a game in which he controlled Ulamog for multiple turns, Nelson was set up to resolve what would be a game-winning Ulamog, the Ceaseless Hunger in the final game after using Censor to catch three spells from Pardee.

That is, until Transgress the Mind from Pardee ruined that plan, leaving Nelson on the back foot. But it was his (and Paul Dean's) innovation to the Temur Marvel deck that saved the day. A Radiant Flames off the top of the deck allowed Nelson to clear away Pardee's board of Plant Tokens and gave his Ulvenwald Hydra a window to clear out the pesky planeswalker that had won Pardee the second game.

That was enough. A turn later the Hydra rumbled in for more than enough damage to win the game, and Nelson got the monkey firmly off his back, becoming the champion of Grand Prix Omaha and running his streak of rounds without a loss to 22. Best wishes to whoever is unlucky enough to be his next opponent.

Congrats to Brad Nelson, the winner of Grand Prix Omaha!