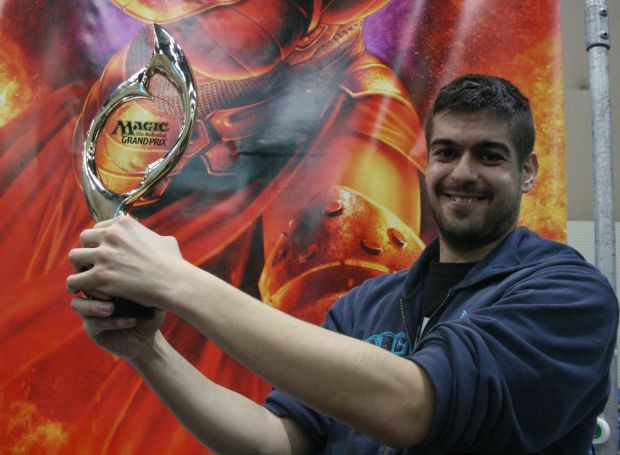 t's been a splendid weekend here in Paris, France. It started out on Valentine's Day where 1,587 love hungry players went head to head for a spot in the second day of competition. Nine rounds later 186 of them could celebrate succeeding. Among the undefeated players Paulo Vitor Damo da Rosa stood out as the hottest contender for the title. The Brazilian made it to the Top 8, but once there it was a 26-year-old Magic Online grinder who took the title home to Spain. Javier "Thalai" Dominguez made an excellent deck choice with his Blue-Black-Green Delver deck, opting to go without True-Name Nemesis, instead gunning to beat it.

With an 8-1 record after Day One he wrapped up the Swiss with 5-1 on Day Two before heading into the Top 8. There he took down fellow countryman Jóse Manuel Fernández Castelló before unleashing his discard spells and mana efficient creatures against Frenchmen Loïc Le Briand and Maxime Gilles.

With a Grand Prix in Spain in two weeks we might not have to wait long before seeing Javier Dominguez back in the spotlight. Even though he prefers Legacy it would be no surprise to see him experimenting with Born of the Gods in limited. That is, if he can find the time between playing Legacy on Magic Online against coverage reporters and Legacy experts alike.

Until next time, we say good bye and ... Congratulations to Javier Dominguez, champion of Grand Prix Paris 2013!

4 Force of Will 1 Batterskull
53 Cards

4 Force of Will 1 Misdirection 3 Through the Breach

1 Misdirection 4 Force of Will 2 Through the Breach

4 Force of Will 1 Sigarda, Host of Herons
42 Cards

1 Batterskull 3 Force of Will
51 Cards

4 Tarmogoyf 1 Life from the Loam

4 Force of Will 4 Entomb 4 Brainstorm 3 Daze