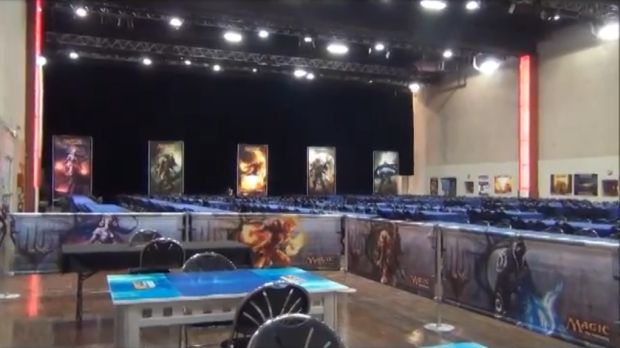 ay One of Grand Prix Paris 2014 is in the books. And what a day it was! We saw amazing Magic being played by some of the world's best and brightest, and we saw the Legacy format at its best. 1,587 hopefuls entered the tournament but only 186 of them managed to escape the first nine rounds with scores of 7-2 or better.

Among them, Hall of Famer Paulo Vitor Damo da Rosa, Kasper Euser, Maxime Gilles, Philipp Schönegger, and Gregorio Soriente lead the field overnight with unblemished records of 9-0. Close behind in the standings, however, are players like Andreas Ganz, Elias Klocker, and Carlos Moral, all on 8-1, and 7-2s like Joel Larsson, Alexandre Darras, Pierre Dagen, (25) Christian Calcano, Marijn Lybaert, and Jan van der Vegt certainly can't be discounted either. It's going to be an interesting day tomorrow, when the players race to the finish line, when the Top 8 will be decided, and when, finally, a new champion will be crowned.

Join us then, both on text and video, as we bring you all the action, all the excitement, and all the tech straight from the battlefield. Until then, from Paris, we wish you a good night!


With in excess of 20 years of Magic sets to pick from, the number of viable decks in Legacy is mind-boggling. Since there are so many, let's just get started, shall we?

RUG Delver/Canadian Threshold – This long-time favorite runs 18 lands including four Wastelands which are hardly ever used for mana production, manages to get by with the help of Brainstorm and Ponder, adds further disruption in Stifle, Daze, and Force of Will plus a little firepower in Lightning Bolt, and kills with cheap threats like Delver of Secrets, Nimble Mongoose, and Tarmogoyf.

Stoneblade – On the control side of the aggro-control spectrum, this deck features Stoneforge Mystic for Batterskull, Umezawa's Jitte, and usually one Sword of somethong-or-other along with Swords to Plowshares in white, a few counterspells, the ubiquitous Brainstorm, Jace, the Mind Sculptor, Snapcaster Mage, and True-Name Nemesis as an equipment bearer in blue, and mosten often adds black for a bit of discard, sometimes Lingering Souls, or the odd Vindicate.

BUG Delver – Also called "Team America," the deck resembles its red-blue-green counterpart, but uses Deathrite Shaman instead of Nimble Mongoose to go a little higher on the mana curve, enabling more potent disruption like Hymn to Tourach and Abrupt Decay as well as stuff like Tombstalker and Liliana of the Veil.

Storm – This deck's game usually starts with a library manipulation and/or discard spell, next are mana rituals and artifacts like Lion's Eye Diamond and Lotus Petal, then comes Infernal Tutor or Burning Wish, Ad Nauseam or Past in Flames to continue chaining spells, and finally there's Tendrils of Agony or Empty the Warrens for the killing blow, which can be dealt as early as turn one!

Sneak and Show – This deck's goal is to get a fast Griselbrand or Emrakul, the Aeons Torn onto the battlefield via Show and Tell and/or Sneak Attack, and it uses Brainstorm and Ponder to find its combo parts, some countermagic to protect them, and some combination of Ancient Tomb, Lotus Petal, and City of Traitors for additional speed.

Miracles – One of the few true control decks of the format, this white-blue build includes a lot of the staples of the format like Force of Will and Swords to Plowshares, but also enlists, together with Brainstorm and Jace, the Mind Sculptor, the help of Sensei's Divining Top to get full mileage out of Terminus, Entreat the Angels, and Counterbalance.

UWR Stoneblade/Delver – Rather new to scene, this hybrid retains the low land count and spell focus of other Delver of Secrets decks while adding a somewhat smaller Stoneblade package with just two equipments and two copies of True-Name Nemesis along with four Stoneforge Mystics, for a total of ten creatures.

Jund – Based on the time-honored strategy of putting all the best green, red, and black cards into one deck, the list here includes Bloodbraid Elf, Dark Confidant, Deathrite Shaman, Tarmogoyf, Abrupt Decay, Punishing Fire plus Grove of the Burnwillows, Hymn to Tourach, Thoughtseize, and Liliana of the Veil.

Elves – The deck quickly busts out a lot of Elves with particular help of Gaea's Cradle and the Heritage Druid/Nettle Sentinel combination as well as the Wirewood Symbiote/Elvish Visionary combination, can draw an insane amount of cards with Glimpse of Nature in one big combo turn, and/or kill quickly by searching up Craterhoof Behemoth with Natural Order.

Merfolk – The deck basically consists of a few counterspells, a set of Æther Vials, and a whole lof of fish like Lord of Atlantis, Master of the Pearl Trident, and Merrow Reejerey which pack quite a punch.

Death and Taxes – A white weenie deck with Wasteland plus Rishadan Port, Thalia, Guardian of Thraben, Phyrexian Revoker, and Aven Mindcensor for disruption, Æther Vial, Flickerwisp, and Mother of Runes for protection, and Stoneforge Mystic and Mirran Crusader for the beats.

Pox – A mono-black deck that heavily attacks both the opponent's mana as well as hand with Wasteland, Sinkhole, Smallpox, Inquisition of Kozilek, Hymn to Tourach, and Liliana of the Veil, leaving a minimum of slots to provide the actual kill with Mishra's Factory and a couple of Nether Spirits and Cursed Scroll.

Nic Fit – A black-green-blue midrange deck with a lot of variety that combines Cabal Therapy and Veteran Explorer to ramp into creatures larger than what one usually sees cast in Legacy.

Omni-Tell – This takes the shell of Sneak and Show (see above) but leaves out most of the creatures and Sneak Attack in favor of Omniscience, Dream Halls, and Enter the Infinite.

Reanimator – Careful Study or Entomb bins a big creature like Griselbrand for Reanimate or Exhume to get it onto the battlefield, while Force of Will, Thoughtseize, and/or Daze offer disruption/protection.

Tin Fins – A reanimator deck with an even faster kill, which reanimates Griselbrand via Shallow Grave or Goryo's Vengeance, draws a bunch of cards, attacks, draws more cards, summons Children of Korlis to gain yet more life/extra cards, and finishes the opponent with mana artifacts/rituals and Tendrils of Agony.

Dredge – Playing mostly from the graveyard, this deck first needs to dump a dredge card like Golgari Grave-Troll per Careful Study, Faithless Looting, or Putrid Imp, then dredges and dredges more with Breakthrough or Cephalid Coliseum, eventually getting a bunch of Narcomoebas and Ichorids back from the grave, along with free copies of Cabal Therapy and Dread Return, creating a Zombie army via Bridge from Below.

Belcher – Running as little as one Taiga as its only land, this deck instead uses Elvish Spirit Guide, Simian Spirit Guide, mana artifacts like Chrome Mox or Lotus Petal, and all kinds of mana rituals, from Rite of Flame to Pyretic Ritual, to either cast Empty the Warrens or cast and activate the eponymous Goblin Charbelcher, killing on turn one or two.

Allspells – Similar to Belcher, here a player only needs four mana to cast/activate either Balustrade Spy or Undercity Informer, dumping all of their library, which in turn triggers Narcomoebas, enables the casting of Cabal Therapy and Dread Return to reanimte Angel of Glory's Rise and, with it, Laboratory Maniac plus Azami, Lady of Scrolls to win the game.

High Tide – This mono-blue engine combo deck generates a lot of mana with the help of its namesake card and untap spells like Turnabout and—in different versions—Time Spiral or Reset, draws a lot of cards with Meditate, and kills with Brain Freeze.

Lands – There are a couple of different decks running Life from the Loam and upwards of 30 lands including Maze of Ith, The Tabernacle of Pendrell Vale, Wasteland of course, Dark Depths, and Thespian's Stage, one with Exploration and Manabond, one with Mox Diamond, Smallpox, Liliana of the Veil, and an Entomb-powered toolbox for the likes of Raven's Crime and Punishing Fire.

Shardless BUG – This black-blue-green aggro-control deck's mana curve runs higher than BUG Delver of Secrets's for planeswalkers Liliana of the Veil and Jace, the Mind Sculptor, eschewing most countermagic for the eponymous Shardless Agent to cascade into Ancestral Vision set up by Brainstorm.

BUG Control – One step further, then, is this deck which drops all creatures and Ancestral Vision in favor of more counterspells, more planeswalkers, Pernicious Deed, Innocent Blood, and Standstill.

Enchantress – Argothian Enchantress and Enchantress's Presence, along with Wild Growth and Utopia Sprawl, build the basis for this old-time favorite, which aims to build an impenetrable fort with Sterling Grove, Solitary Confinement, or Moat, then win via Sigil of the Empty Throne or Rest in Peace/Helm of Obedience.

UR Delver – The many flavors of Delver of Secretss also include this two-color version which usually employs Grim Lavamancer, sometimes Young Pyromancer and True-Name Nemesis and more burn than its red-blue-green counterpart.

Affinity – Normally, Arcbound Ravager and Cranial Plating deliver the beats only in Modern but sometimes the robots rear their heads in Legacy too, and here they can even draw upon the power of Seat of the Synod and Co.

Infect – In Legacy, Glistener Elf, Inkmoth Nexus, and Blighted Agent can be boosted not just with the more modern cards Might of Old Krosa and Vines of Vastwood but also, for example, with Invigorate and Berserk.

MUD – Often completely colorless, the deck starts with City of Traitors or Ancient Tomb, drops Chalice of the Void or Trinisphere for early defense, then ramps into unfair stuff via Grim Monolith or Metalworker, finishing with Wurmcoil Engine, Sundering Titan, or Kuldotha Forgemaster for Blightsteel Colossus.

And that's a wrap. The 32 most likely candidates to be played this weekend are listed above, but still there's more. Some players may choose the combo deck named for its centerpiece Aluren, for example, some may dust off what is considered to be an out-dated archetype in Stax, and some may do weird stuff with Rest in Peace/Energy Field/Helm of Obedience. Moreover, in Legacy even a shift of a few cards, what elsewhere would be a minor variation, can create a new decktype, and of course there's always the possibility for major innovation as well.

In any case, it's going to be an interesting tournament to watch!


As is tradition, the weekend started on Friday with a number of Grand Prix Trials, the last chance for players to earn two byes for the Grand Prix and the first chance for us to get an impression of how the field may look like at this Legacy event. The following is a sampling of 24 decklists whose pilots went 5-0 to win one of these Trial tournaments.

1 Past in Flames 1 Tendrils of Agony

4 Liliana of the Veil 1 Sorin, Lord of Innistrad

1 Army of the Damned 1 Tendrils of Agony

1 Sword of Fire and Ice 1 Batterskull

4 Force of Will 1 Batterskull
52 Cards

4 Entomb 2 Daze 4 Brainstorm 4 Force of Will