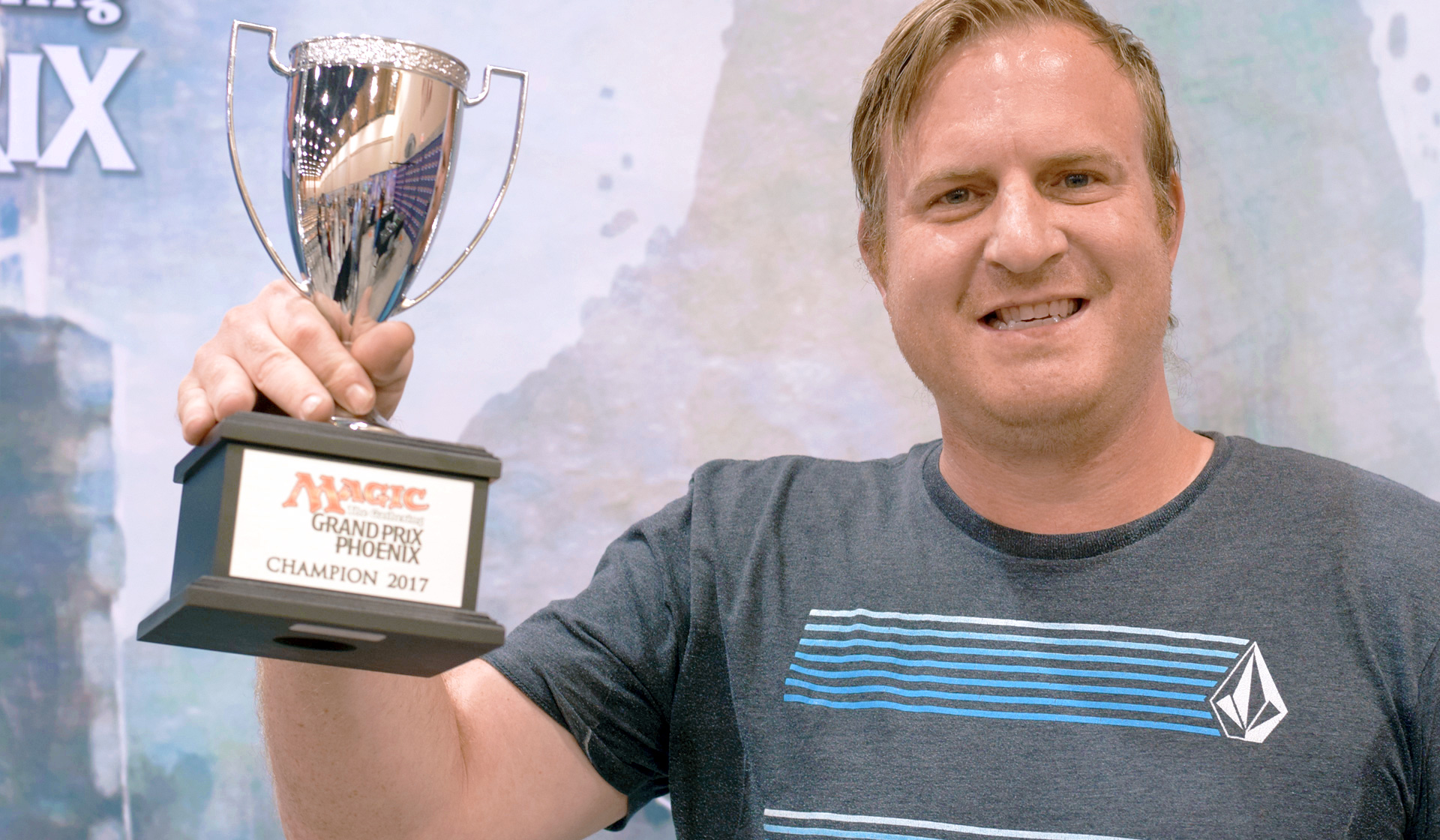 THE HASHTAG FOR GRAND PRIX PHOENIX IS #GPPHX. JOIN THE CONVERSATION.

Arizona might not have any coastline, but it's been smooth sailing all weekend along the shores of Ixalan. Underdog Sean Miller hoisted the trophy high after defeating the second-ranked player in the world, Reid Duke in the finals of a great Top 8—featuring players old, new, and all beloved.

Hall of Famer Anton Jonsson came out of cryostasis to wreak havoc; Paul Dean mugged the camera throughout his elimination matches; (21) Christian Calcano returned to form with a Grand Prix Top 8; and new World Champion William Jensen has apparently nicknamed Territorial Hammerskull "Jon Hamm" from the booth. It was quite a cap to the weekend.

All this action is leading up to Pro Tour Ixalannext weekend in Albuquerque, New Mexico. This will be the first Pro Tour in a long time not linked with an expansion's release, and it will be interesting to see how the extra time with Ixalanaffects what happens on the biggest Magicstage.

From everyone in Phoenix here's a pirate-hat tip goodbye. See you next week in New Mexico!

There's always too much going on at an event to ever quite grasp all the various bends in the river, but you can try. This Ixalan Limited weekend leading into the Pro Tour in New Mexico was a...

Want to see what rose to the top of Grand Prix Phoenix's? Then take a look at the Top 8 competitors' decklists! ...

Learn more about Grand Prix Phoenix's Top 8 competitors—including who they are, what they've done in the game, and more—by taking a look through their profiles! Name: Kai Ruan Age:...

Ixalan Sealed is proving itself an strange beast. It's full of aggressive tribes, but also ramping New Horizons craziness. Here are the four players who managed this balance the best and finished...

Preceding Pro Tour Ixalanby a few short days, this weekend is a precursor to what will go down next weekend. And if it's anything like this, it should be pretty darn crazy. The Sealed format is fast for sure, will the tribal decks of vampires, merfolk, dinosaurs and pirates leading the way—but players have been succeeding with some off-the-wall five-color, Sunbird-invoking shenanigans.

This weekend is different than most pre-Pro Tour Grands Prix, as Ixalanhas been on the shelves for a month now, and was debuted in high profile at the World Championship. We've hit the fast-forward button in the "evolution" step of the format now, and we'll see if the dominant aggressive strategies that we know from IxalanDraft will have a challenger now. Now that people have seen the format, is there a way to play those bigger cards successfully?

After the Sealed portion, four players sit undefeated: Sean Miller, Jacob Nagro, Christopher Finley and Shahar Shenhar. They have a leg up on everyone else going into tomorrow. But that's only one win worth of leg. With tons of great players just a single step behind, they'll have to maintain their cool if they want to translate today's performance into a Top 8 appearance.

All the Ixalancard-slinging will be streamed at 9am tomorrow morning at twitch.tv/magic. With Brian David-Marshall, (6) William Jensen, Marshall Sutcliffe, and (1) Paulo Vitor Damo da Rosa in the booth, you can't lose.

The action came fast and furious the first day of Ixalan Limited in Arizona—almost as fast as the Limited format itself. 1,076 players got themselves prepared and marched into the...