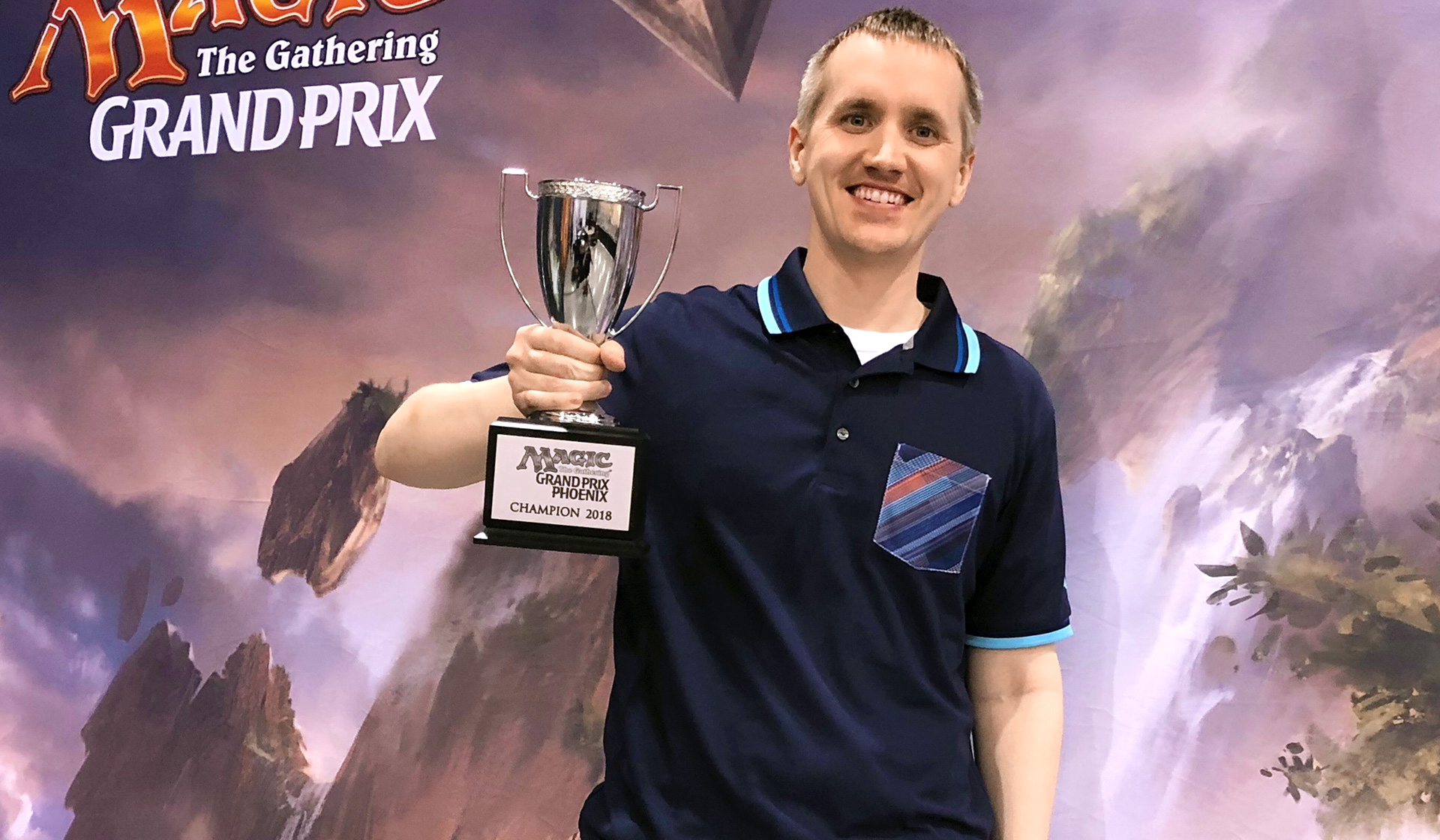 Steve Locke wins his second Grand Prix of the season as he pilots Humans to a victory in Phoenix.

THE HASHTAG FOR GRAND PRIX PHOENIX IS #GPPHX. JOIN THE CONVERSATION.

Steve Locke almost didn’t even play in Phoenix. He and his wife have family in the area and typically travel to the area in March, and it was a bit of a happy accident that there happened to be a Grand Prix that conveniently lined up. So, Locke thought, why not give Modern a shot? His last tournament – Grand Prix Minneapolis last year – he won with Mono-Black Zombies in Standard without dropping a match.

Well, Locke may want to accidentally find himself at a few more Grand Prix. He tore through the tournament with the Humans deck that is a relative newcomer to the format, and found himself in the finals against Pierson Laughlin and his Jund deck – the same deck that had just delivered him to the finals thanks to the Dark Confidant moment revealed above.

In the first Grand Prix with Bloodbraid Elf and Jace, the Mind Sculptor legal, the pair forever linked by their shared history made their mark – four decks in the Top 8 contained copies of at least one of the two cards – but they were far from dominant. Eight different archetypes comprised the Top 8, and it was an entertaining tournament from start to finish that demonstrated that the Modern format is as healthy and fun as ever.

Congrats to Steve Locke, the winner of Grand Prix Phoenix!

Grand Prix Phoenix was a landmark event for a couple reasons. Okay, well, two reasons – Bloodbraid Elf and Jace, the Mind Sculptor. The duo are forever linked thanks to their shared history, and...

Eight distinct archetypes advanced to the elimination rounds of Grand Prix Phoenix, demonstrating that even after the unbanning of Jace, the Mind Sculptor and Bloodbraid Elf, the format's...

by Corbin Hosler and Marc Calderaro

Just because there were eight different archetypes in the Top 8 of this awesome tournament doesn’t mean that was the only spice around! Here are the decks that finished just outside the...

There are plenty of great players outside the top tables. Matt Nass, (8) Gerry Thompson, Jon Stern, Ben Weitz, Alex Majlaton, Eric Severson, Corey Baumeister, Lance Austin, and the famed White-Black Gideon Superfriends player Daniel Brouillet each have only one loss, and still have a great shot of making the Top 8 tomorrow.

This Modern field is as vibrant as ever. Though Jace, the Mind Sculptor’s return is more muted than expected, the top tables are awash with Bloodbraid Elf. The little cascading wonder is slowly sculpting the format in its image. We’ll see tomorrow the state of the format, after biggest Modern tournament since the unbanning concludes! See you tomorrow for Day 2 of Grand Prix Phoenix!

Highlights of Grand Prix Phoenix Day One by Corbin Hosler

Welcome to the world of Jace, the Mind Sculptor. The greatest planeswalker has finally been unleashed on Modern for the first time, and the format will never be the same after the return of the...