Does the alias “_megafone_” ring a bell? But of course, that guy is a menace on Magic Online. And on paper too! 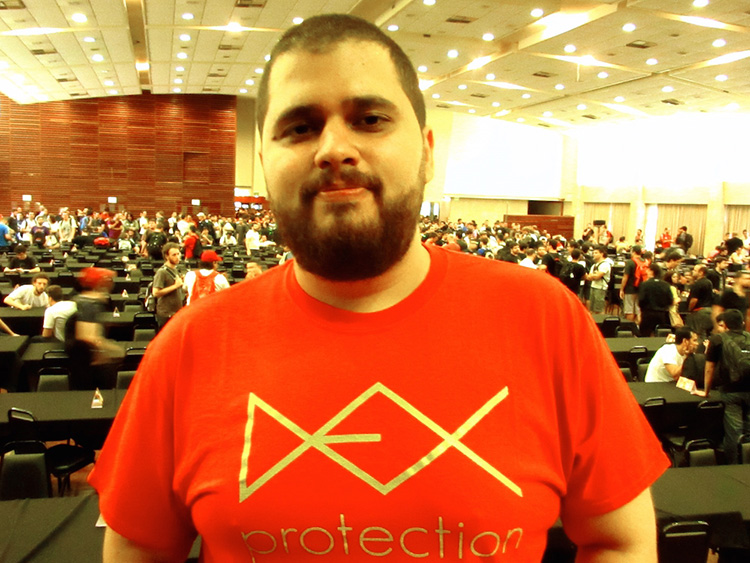 With Grand Prix Top 8s at Santiago 2014, Providence 2015 and Las Vegas 2015, Pedro Carvalho is one of the more accomplished players in the room, and certainly someone you'd like to hear from! Having just returned from a money finish at Pro Tour Battle for Zendikar, he has 6 Pro Points in the bag to kickstart the 2015 - 2016 season and is looking for a few more today, hopefully 8!

Finishing the previous season at 29 Pro Points, Carvalho takes the opportunity to praise the new Pro Point payout with a twinge of regret. “If only the new system had kicked in last season, I would have exactly 33 for Gold because I had a couple of X-4 and X-5 finishes that would have granted me 4 more Pro Points. Then, I could talk to you for another hour and sit out of Round 3!”

Nonetheless, I think we have enough time to delve (pun intended) into the genius mind of Carvalho. It's safe to say that most players in Porto Alegre intend to win by dealing 20 damage to their opponents. Not him though. He only intends to deal 10!

Blue-Green Infect might not be a new archetype, but for sure it isn't a one of the Top 5 most popular decks that come to mind. When questioned about the metagame in Brazil, Carvalho said that it's pretty much the same as in other regions, except that the Brazilians seem to like Jund and Grixis a lot.

“Infect doesn't do very well against removal-heavy decks. For example, Jund is not a very good matchup for me because their plan is to kill everything in their way. Grixis Control is another such matchup that I would be happy to avoid.”

This matchup isn't as uncommon as you think. As a matter of fact, at Pro Tour Return to Ravnica where Carvalho also made the Top 8, he witnessed “Infect Master” Kelvin Chew get crushed by “Magic Master” Yuuya Watanabe with his Jund deck.

“Still, I wouldn't worry too much. I expect only a total of about 15% of Jund and Grixis combined. My best matchups are against the guys who are trying to 'combo' me off.”

Referring to decks such as Splinter Twin, Amulet Bloom and the-likes, Infect is a much faster “combo” deck than them and according to Carvalho, only “the Griselbrand deck” is faster.

When asked about whether the metagame will change as a result of Battle for Zendikar, Carvalho has a conservative stance. “I think Bring to Light might be very good, but we haven't seen a lot of lists yet. And my teammate is piloting the Retreat to Coralhelm / Knight of the Reliquary deck. If he does well today, you should really feature him. It's really cool! However for today, I think it will be the usual suspects and I personally don't expect much innovation before the Modern Pro Tour,” undoubtedly referring to the upcoming Pro Tour Oath of the Gatewatch in Atlanta.

What's special about his Infect list is a single copy of Sylvan Scrying, in addition to a couple of Wild Defiance in the maindeck.

“I'm only playing 19 lands, and when we crunched out the games with my teammates from DEX Protection, we realized that the singleton Sylvan Scrying is actually very good.” He explains that it not only doubles up as a threat (because you can always tutor up Inkmoth Nexus in a pinch), it also grabs Pendelhaven when you need to deal some additional damage, and fixes your mana if you're lacking Blue.

Wild Defiance is also an excellent card against a sea of red, effectively blanking burn-based removal spells like Lightning Bolt and the increasingly-popular Kolaghan's Command.

“I think the Snapcaster / Bolt decks will find Wild Defiance to be a huge headache. Once I manage to resolve it, I don't think they can live past the next turn. I really wanted space for a third copy, but there is simply no space. I mean, what do you even cut? The decklist is already so tight as it is!”

I looked through the deck, fanned out in front of me, and could not offer any useful suggestions. Who am I to question the mighty “_megafone_”?