Platinum Pro Thiago Saporito has a confession. “I haven't played any Modern since the World Championship and I don't like Abzan anymore! Because of that, I'm choosing the easiest deck to play!”

Surely, you can't stick the wrong aura onto the wrong dude, considering that half the time you only have one guy on the board. Shaving away Kor Spiritdancer (because you're providing a “live” target for your opponent's removal spells, Saporito has replaced it with Silhana Ledgewalker instead.

He expects Aggro decks such as Burn and Affinity to be popular, and within expectation, his has been paired against Muhammad Aqel who has the robots on his side.

It wasn't long before Slippery Bogle had Rancor and Ethereal Armor attached to it, while Aqel could only watch on with a slow draw involving only Ornithopter, Mox Opal, Galvanic Blast (rendered useless) and four Nexus lands.

Spider Armor and Gladecover Scout combined, allowing it to attack past Ornithopter and despite being on a rather high life total, Aqel wisely decided to chump before it was too late. Having not drawn into a Cranial Plating that would allow him to race, Aqel saw no way out and scooped up his cards. 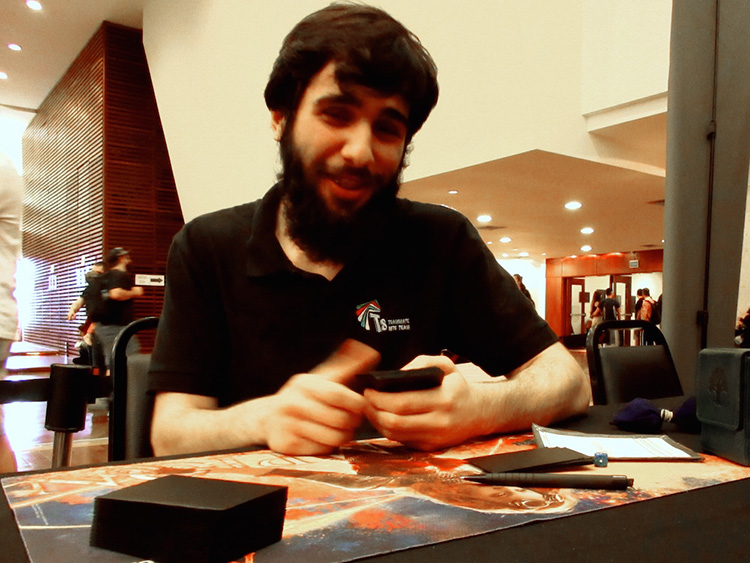 Muhammad Aqel smiles, despite being one game down.

Eqel trumped with the Spellskite that would usually mean “Game Over” for Bogles, but Saporito was ready with Stony Silence to shut it down. A pair of Steel Overseers were the embarrassing follow-ups.

That gave Saporito plenty of time to stick Ethereal Armor and Daybreak Coronet on his “Bogle” and there was simply nothing Eqel could do, other than chump-block and hope to kill with poison counters, activating Inkmoth Nexus and pumping it with Blinkmoth Nexus and Signal Pest.

Path to Exile ensured that the plan would never materialize.

Saporito sums it up, “this matchup is about us drawing the sideboard cards. He drew his Spellskite, but I had my Stony Silence. Sorry buddy!”