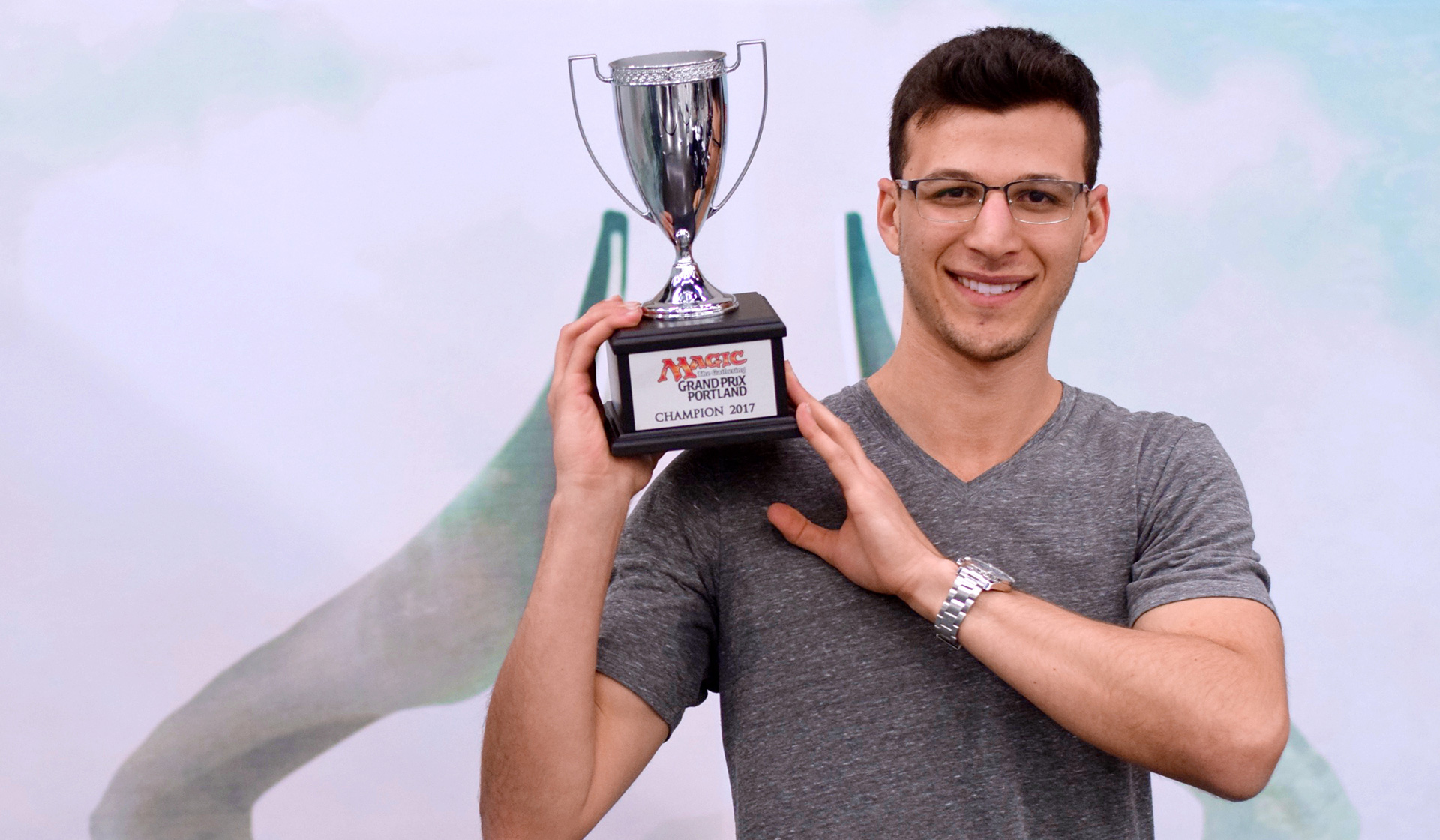 THE HASHTAG FOR GRAND PRIX PORTLAND IS #GPPORTLAND. JOIN THE CONVERSATION.

Day 2 started with just over 400 Grand Prix competitors returning to the Portland Convention Center to vie for a place in the Top 8, though six more rounds of Swiss stood between them and that goal.

From the start, Danish pro and member of Revelation Christoffer Larsen was tearing through his competition. Larsen, playing a take on Four-Color Energy that featured Gonti, Lord of Luxury, went undefeated for thirteen rounds before conceding to fellow Top 8 competitor Shahar Shenhar, then drawing into the Top 8.

While a lot of Temur and Sultai Energy decks topped the standings, challengers rose to try to topple the energy decks from their place. Those included, most notably, Corey Burkhart's White-Blue Cycling masterpiece, which finished 15th, and Dean Paterson's Mono-Black Aggro, which finished 20th.

At the end of the day, Michael Bernat, from San Jose, CA, stopped Larsen's seemingly unstoppable winning streak. In a domino-like fall, Bernat then lost to Brandon Goe, who in turn fell to the tournament champion, Shahar Shenhar.

Dana Fischer Is Coming For Us All Seven-year-old Dana Fischer has quickly become one of Magic's favorite mages. In the past year, Fischer has been a staple of west coast and midwestern Grand...

Want to see what rose to the top at GP Portland 2017? Below are the Top 8 competitor’s decklists, ready for you to peruse! ...

If you’re interested in seeing what did well in Portland, below are the Grand Prix Portland 2017 9-16 decklists. ...

The twists and turns of Standard have wound their way through the World Championship, the Pro Tour, through three Grand Prix last weekend in Atlanta, Warsaw, and Shanghai, and have led us here. Today, over 1600 players gathered in the Portland Convention Center, along the banks of the Willamette River, to ride another loop of the Standard rollercoaster.

While, for many players, the top deck of the tournament felt decided weeks ago, many others felt confident in strategies that attacked the current metagame, including top decks from seasons past still relentlessly vying for a place at the top of the field, including Mardu Vehicles and Ramunap Red.

After nine rounds on Day 1, five players topped the field with undefeated records. Tomorrow they, alongside everyone with a 18 match points or more, will return to fight for a place in the Top 8 and a chance at the GP Portland trophy.

Be sure to join us tomorrow at twitch.tv/magic to catch the conclusion of GP Portland!

The twists and turns of Standard have wound their way through the World Championship, the Pro Tour, through three Grand Prix last weekend in Atlanta, Warsaw, and Hong Kong, and have led us here....