The twists and turns of Standard have wound their way through the World Championship, the Pro Tour, through three Grand Prix last weekend in Atlanta, Warsaw, and Hong Kong, and have led us here. Today, over 1600 players gathered in the Portland Convention Center, along the banks of the Willamette River, to ride another loop of the Standard rollercoaster.

While Temur Energy reliably sat atop the rankings through October and into November, it hasn't always taken home the trophy. Ramunap Red, Sultai Energy, Approach of the Second Sun, God-Pharaoh's Gift, and other strategies crowd the field, eager to prove themselves, and it's sure to make for a tense and exciting weekend of play.

After nine rounds on Day 1, x players topped the field with undefeated records. Tomorrow they, alongside everyone with a 18 match points or more, will return to fight for a place in the Top 8 and a chance at the GP Portland trophy.

A Look Around the Hall

While you can catch the top tables in action all day at twitch.tv/magic, there's a lot to see around the Grand Prix that doesn't find its way to the feature match tables.

The Portland Convention Center does sit next to a river, so it makes sense that it's a great port for pirates. Magic judges Zenaide Beckham and Brock Sprunger, from Eugene, Oregon, showed up today ready to play in Ixalan style. 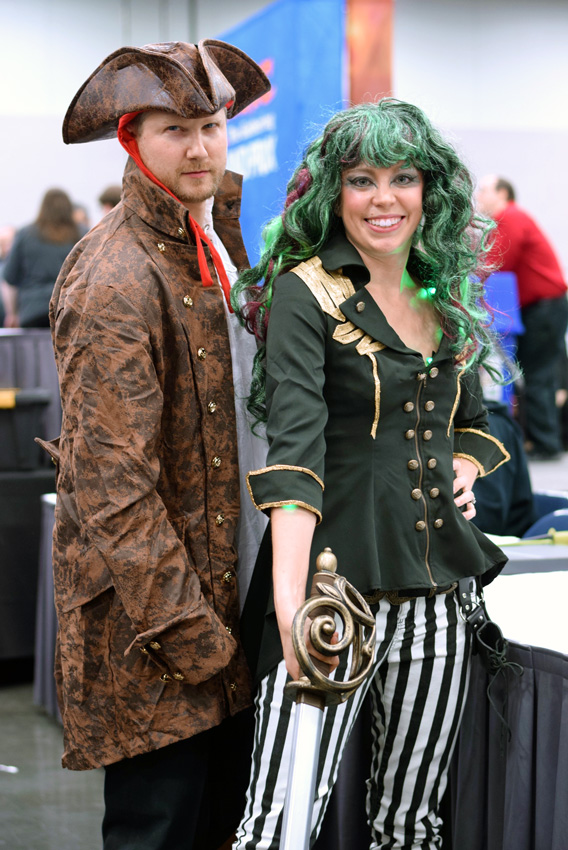 Beckham's cosplay even included small green lights just inside the collar of her jacket that gave her an eerie deep-ocean glow. 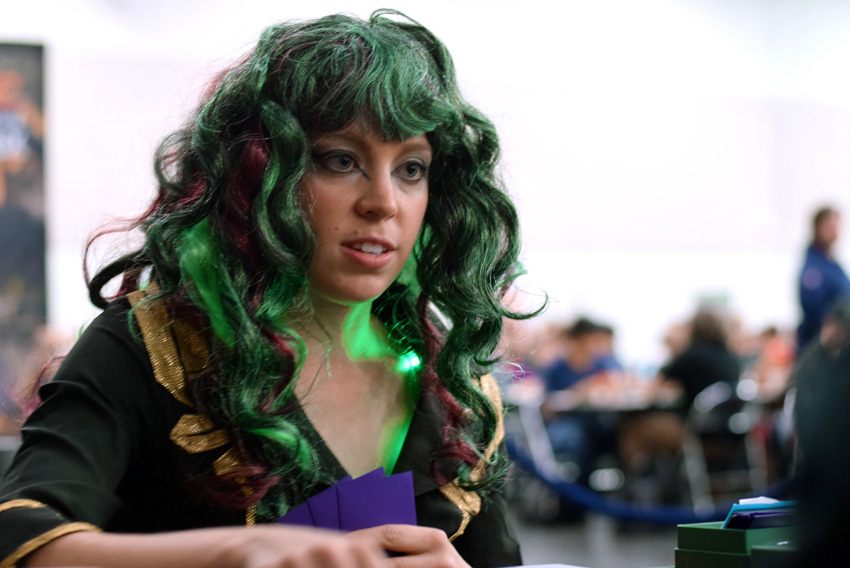 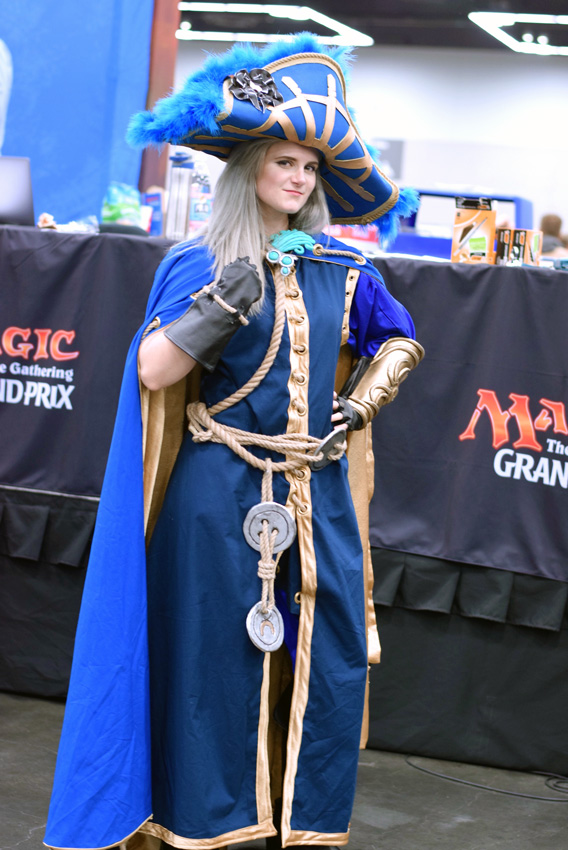 She may be a pirate, but the Admiral was the one in danger of having her things pirated away - specifically, that incredible hat. 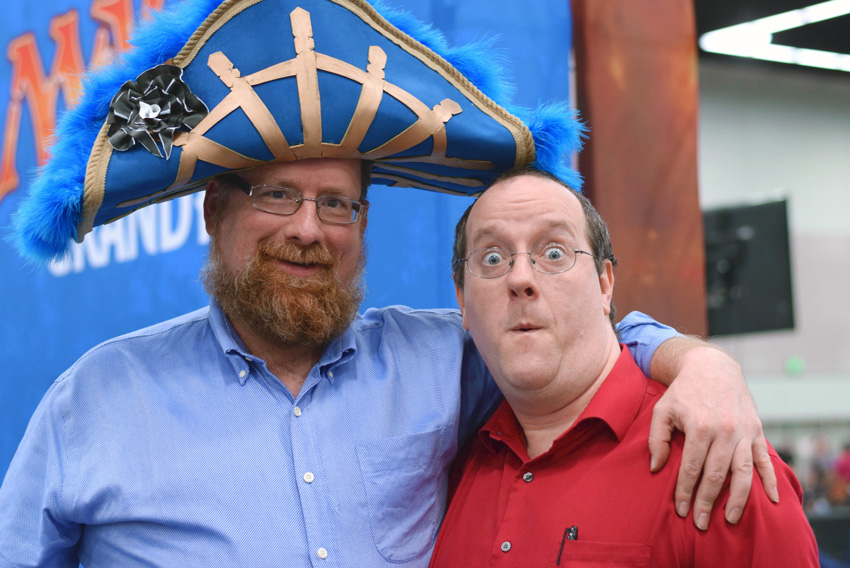 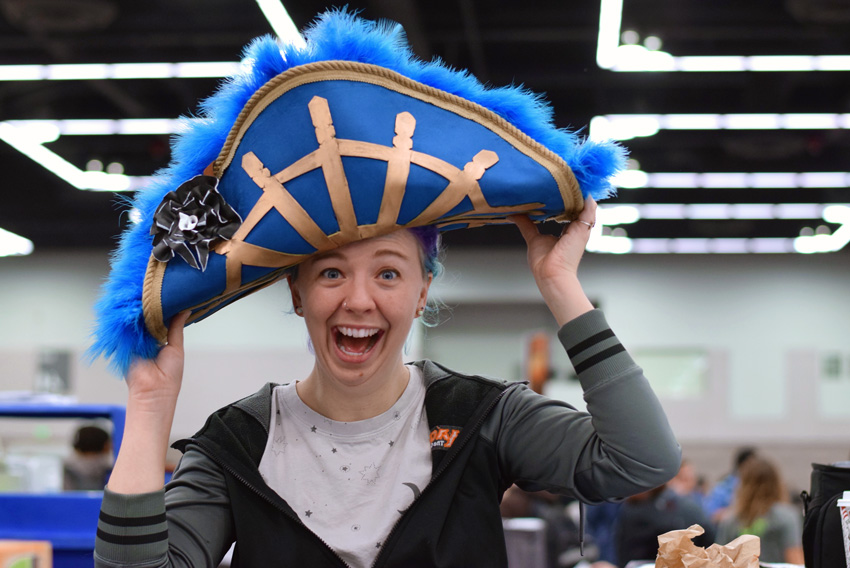 Of course, it wasn't just pirates roaming the seas of Grand Prix Portland. There was a veritable menagerie out on the Grand Prix floor, with dinosaurs, cats, and more running amok. Just because a dinosaurs deck hasn't found its way to the front of the pack doesn't mean that there aren't plenty of players out there still puzzling out the best way to Savage Stomp their Standard competition.

At the end of nine rounds, only five of today's 1,699 players remained undefeated. 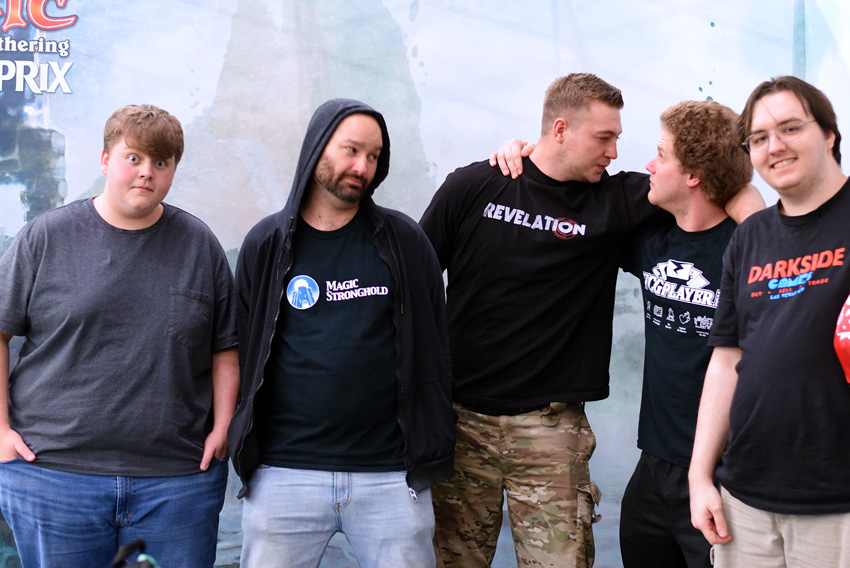 Noah Pfefferle, from Las Vegas, Nevada, has been playing Magic since M12. In the about five years he's been playing, his favorite set has been, like many other players, original Innistrad, which, he says, just can't be beat. Today, Pfefferle played Sultai Energy, a deck he chose because it of its consistency and power, and because of Hostage Taker, which he says saved him "so many times" today. He practiced for the Grand Prix with friends, playing every Tuesday, Friday, and Saturday for the past four weeks.

Gene Brumby is from Wellington, New Zealand, and has been playing Magic since 1994. He says that it's "the love of the wonderful people in the community" that has kept him in the game that long. Brumby played Desert Red today, a deck he and friend Nick Larssen built six months ago and have played since. Brumby particularly likes the deserts, because it's an "amazing dynamic to have lands do something cool."

Oregonian Dylan Nollen tested for the GP with a group of friends, and played the most popular deck in the field today, Temur Energy. He chose the deck because "it's hard to make mistakes." Nollen's favorite card in the deck was Glorybringer, "not even close." Nollen, who has been playing since Llorwyn, said his favorite block is Shards of Alara, because it has all his favorite cards. "That's the set Bloodbraid Elf is from, right?"

Christoffer Larsen is a Danish pro player and a member of team Revelation, along with Martin Dang, Paul Dean, Thomas Hendriks, Joel Larsson, and Petr Sochůrek. Larsen played a deck he called "Gonti Energy" because "I played last weekend." He played it last weekend because "it was already sleeved." Prior to that, he played it because he didn't want to play Longtusk Cub. Larsen's tip for going 9-0 in a GP was to share a room with Corey Baumeister, who, incidentally, went 9-0 today as well.

What is there even to say about Corey Baumeister at this point? He's a monster. He's made the Top 8 of the last four Grand Prix he's played. People once made the mistake of only knowing Corey Baumeister as Brad Nelson's brother. No one makes that mistake now. Baumeister, from North Dakota, is a member of Genesis, alongside Lukas Blohon, Brian Braun-Duin, Seth Manfield, Martin Müller, and, of course, Brad Nelson. Today, Baumeister played Temur Energy, the same deck he played, and made the Top 8 with, in both Denver and Atlanta.

Mono-Black Takes Us All By Surprise

Dean Paterson, from Vancouver, started his day 6-0 with an aggressive mono-black deck he and his friend have been testing, tuning, and playing for the last few weeks. The original inspiration came from one of Eric Froehlich's daily decks on Channel Fireball, which inspired Paterson to pick it up.

"I'm pretty stoked about the deck. It's a pretty fun deck." 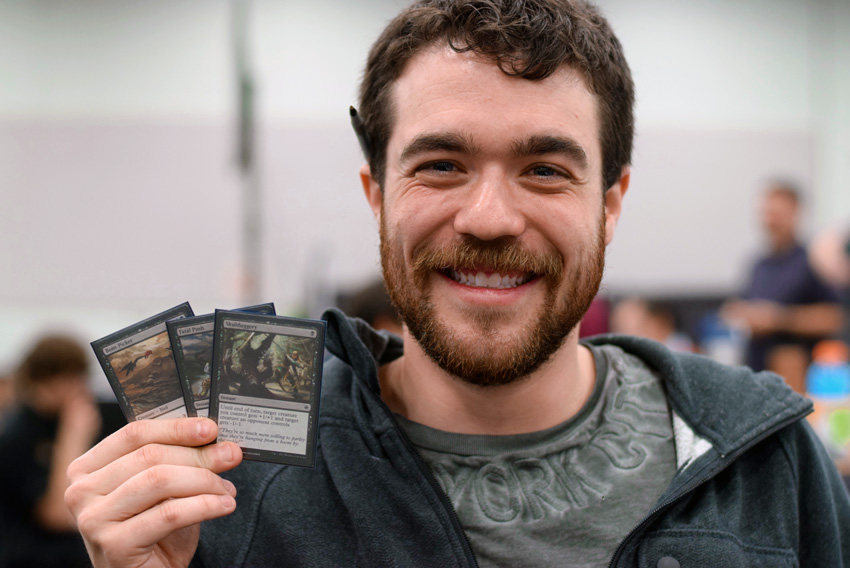 Paterson's liking for the hyper-aggressive strategy comes from both familiarity with the strategy, and its ability to prey on currently popular strategies.

"I think a lot of the midrange decks are coming to fight each other. They're trying to go over the top of each other with four-color and The Scarab God and that kind of stuff, so by playing a bad aggro deck, basically, and knowing the deck really well, I've won with a lot of good combat tricks today."

Paterson's pick for favorite card is a surprising one, though it's much-loved in Ixalan draft.

"I"m playing one Skullduggery main deck, and it's been insane. I love Skullduggery. I wasn't in love with the card, but then I put up two 5-0s with a couple of them in my list, so I couldn't not play one today. It's pretty good, because I was looking for another way to turn Bonepicker on, because that card is just great."

Skullduggery is also It's feasible for Paterson's deck to play two of the Amonkhet flier as early as turn three, after using Fatal Push on a Longtusk Cub or similar Temur two-drop. When that kind of turn three is the follow up to creatures on both turns one and two, "it's really hard to come back from."

A little over a year ago, at Grand Prix Portland 2016, Chris Botelho made a splash with his now-infamous Cat Pact deck. That deck, which used Harmless Offering and Demonic Pact to kill opponents with the Pact's final choice, "you lose the game."

Botelho has continued his inventive streak, brewing up a wild set of decks that he streams each week, and taking 9th this August at GP Minneapolis with Mono-Black Eldrazi Vampires. At GP Portland 2017, Botelho is continuing his trend of playing the unexpected, and reliving Portland memories with a new set of cats. 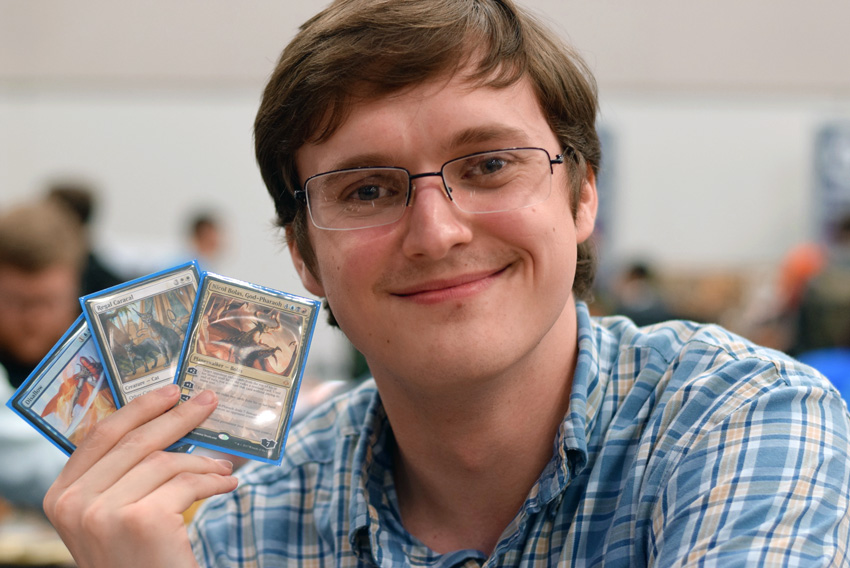 "I'm basically playing what happens if you take an Approach deck, take out all the Approaches, and put all the sideboard cards in the main deck."

This time, Botelho is piloting a four-color control concoction that includes four copies of Regal Caracal in the main deck, as well as two Nicol Bolas, God-Pharaoh, along with a suite of other control staples.

"I started fooling around with a bunch of different ways to beat Temur, and it turned out Bolas was a very good way to beat Temur. When I was playing Bolas in the main and cats in the side, I found out that I should be boarding cats in against Temur, because curving cat into Bolas and having a bunch of chump blockers while Bolas just sits there ticking up is really good. And I was also boarding them in against red, and I realized if I'm boarding these in 80% of the time, let's throw them in the main deck!"

"It plays a lot like the old blue-red Torrential Gearhulk decks. You counter or remove everything for the first couple turns, Settle the Wreckage is your board wipe of choice, and there are a couple of card draw spells like Pull from Tomorrow and Search for Azcanta. Though, there's a lot less than the old blue-red, because you're relying on Caracals and Bolas to be your two-for-ones of sorts. Eventually stick something! Three cats does a good impression of a win condition, or Bolas."

On Friday, eager Grand Prix competitors arrived to get a head start on the rest of the competition, vying for two byes in seventeen single-elimination last chance qualifiers.

Stanley Pace, with blue-green pirates and merfolk, and Steven Rickards, with an aggressively-slanted black-red deck, each took down a Sealed event.

4 Champion of Wits 1 The Scarab God

4 Cast Out 4 Gift of Paradise 1 Search for Azcanta

3 Authority of the Consuls 1 Duress

4 Cast Out 2 Settle the Wreckage

3 Approach of the Second Sun 2 Fumigate

4 Cast Out 3 Search for Azcanta

2 Opt 2 Authority of the Consuls

4 Cast Out 4 Glimmer of Genius 3 Settle the Wreckage

Jeff Cunningham, Cris Kissler, Michael Bernat, Karl Eyre, and Blaine Patrick all won their qualifiers with takes on Ramunap Red like the one below.

Brock Albright, Dalton Hibbard, Nick Stephenson, and Mani Davoudi all took down the competition with the tournament favorite, Temur Energy, some splashing black for The Scarab God, others not.

Make sure to tune into coverage at twitch.tv/magic to catch the conclusion of GP Portland and to see which player, and deck, emerges victorious.