The first day of Grand Providence has come and gone, and with it the debut of Ixalan to the world. It was the rare premier event immediately upon a set's release, but it was a sound success, with more than 500 teams turned out for the show to explore a world of Dinosaurs, Pirates, and more.

And more than one player was feeling the spirit of the set. 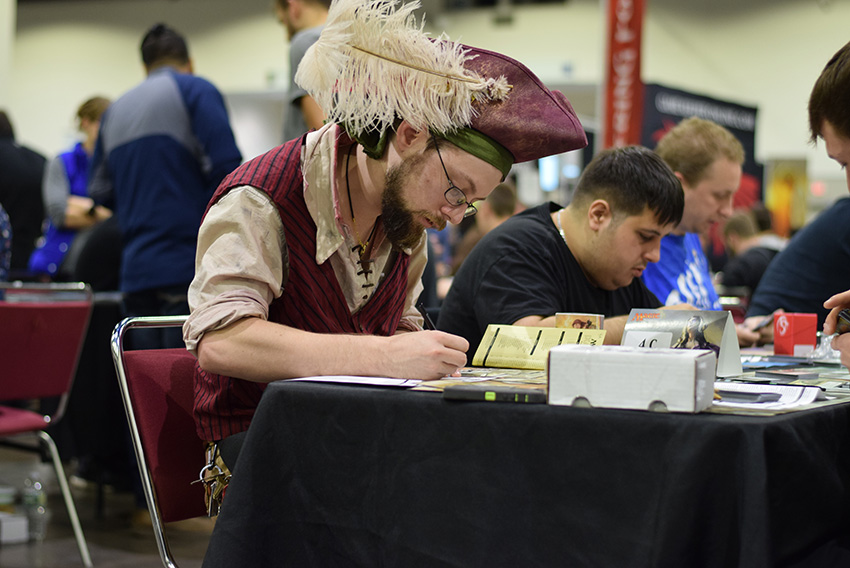 It's safe to say that Tony Houst and Chris Jarmak arrrrrrre enjoying our journey into Ixalan.

Don't worry, there's more bad puns where that came from. Here are the highlights that stood out from Day 1 of Grand Prix Providence.

With a set as new as Ixalan, Grand Prix Providence offers an unparalleled look into how the set plays out. With so many things going on – Merfolk and Pirates and Vampires and Dinosaurs (oh my) – it can be hard to keep track of the set is all about when it comes to competitive play. In most past Team Limited events, the strategies of the set are well-defined and players know what to look for going in. But without the benefit of draft camps or weeks of Magic Online practice, this event offered a raw glance into how pros approach a new format.

It was an especially interesting opportunity given the prevalence of Treasure Tokens in Ixalan. While most decks in the room were still two colors as you would expect, cards like Sailor of Means and Depths of Desire helped players produce plenty of makeshift Lotus Petals that not only ramped them, but also enabled off-color splashes.

That's how we saw many a blue-black deck splash for things like Marauding Looter or Tishana, Voice of Thunder, and in a format where players put together three decks for the team to play, everything was on the table when it came to charting a course for the tournament.

Another defining feature of Ixalan was the increased presence of the four major tribes that comprise the plane: Dinosaurs, Pirates, Merfolk, and Vampires. While many decks in Limited formats end up as a pile of "good stuff" decks, Ixalan rewards synergy in a way that few sets do. And while it can be hard to pay off that synergy in a normal Sealed Deck build, the extra packs available to teams in Team Limited make all the difference in the world of Ixalan.

Gishath is the flashiest, but the entire set is built around tribal synergy, from Dire Fleet Captain to Bishop of the Bloodstained to Vineshaper Mystic to Savage Stomp. With so many rewards for playing strict tribal decks, the top players in the room gravitated to the strategy across all three decks – it was common to see a White-Black Vampires deck alongside a Green-Blue Merfolk build and a Red-White Dinosaurs tribal. Defined archetypes are rarely seen in Limited, but Ixalan has changed the way things will be viewed, at least for the next six months as Rivals of Ixalan is added into the mix.

"The tribes all have defined roles, from aggro to tempo or midrange," explained Shaheen Soorani. "It gives a lot of direction to your deck and makes certain matchups more of a thing you can be prepared for."

One of the big appeals of Ixalan is the tribes it's brought to Magic – some back after a long hiatus and some for the first time. As the rest of the event unfolds, watching how players plan out the matchups between competing factions will be fun to watch.

And, of course, Dinosaurs and Pirates. What else do you need?

Judges are an integral part of every Grand Prix. The event can't run without them, and from the player at their first Grand Prix to the hardened pro, everyone leans on judges to improve their Grand Prix experience.

But sometimes, even judges are going to game. That's what the team of Nicolette Apraez, Matt Williams, and Jess Dunks chose to do this weekend at Grand Prix Providence – "It's a team event!" was all the justified needed – and they weren't the only judges to hang up the black this weekend. 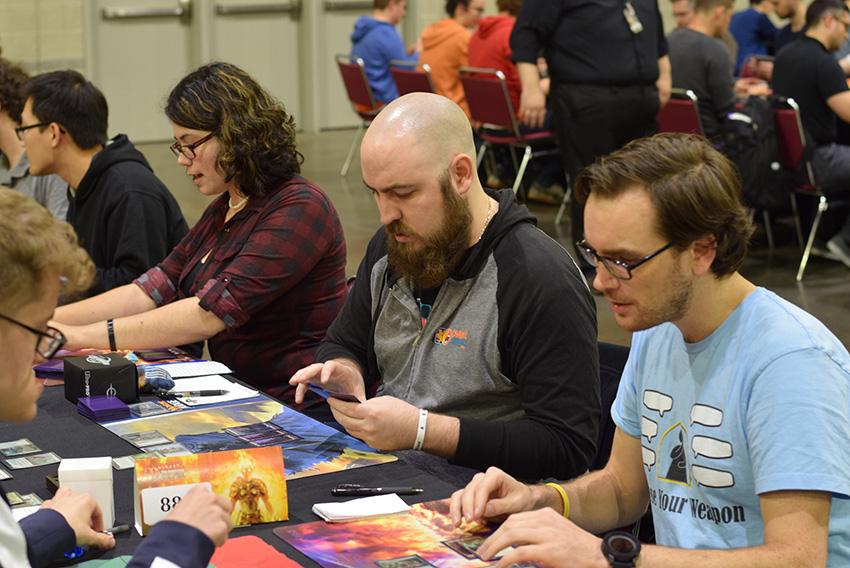 That's nine levels of judges all on one very judicious team.

Also battling this weekend were Rob Mackenzie – the judge coordinator for USA north – along with Jacob Milicic. 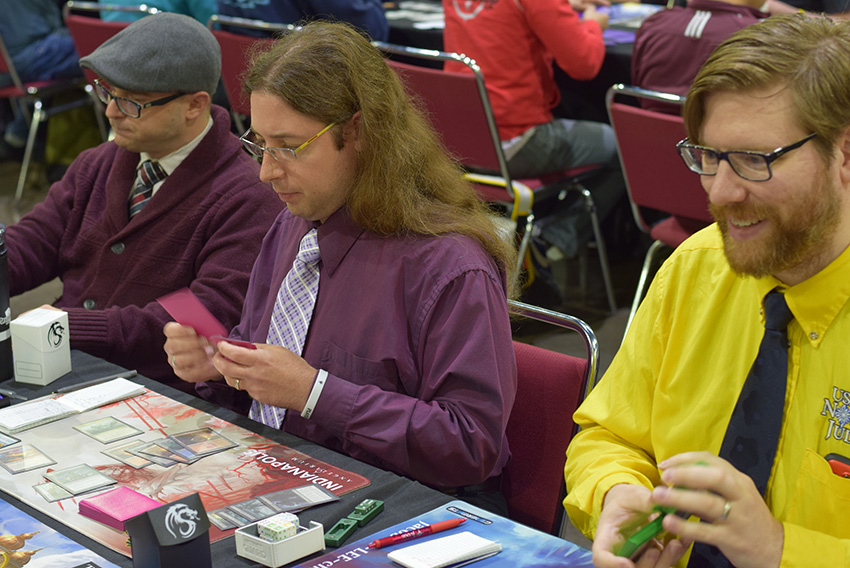 One Team at the Top

Round 9 featured two 8-0 teams battling for the right to remain undefeated. On one side sat the team of brothers David Pargh of Billy Pargh along with Connor Robinson. And on the other? A team featuring two Pro Tour winners and a former Player of the Year: No. 11 Steve Rubin, Alexander Hayne, and Mike Sigrist – or "dem boys," as the regular Team Grand Prix trio is known. 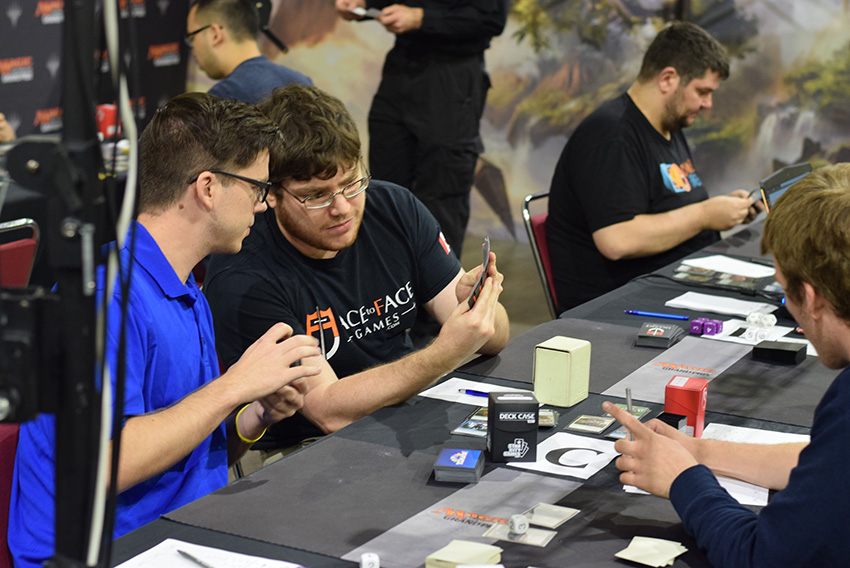 There was no question who was the favorite heading into the match, but it was Billy Pargh who drew first blood, knocking off Hayne to put the challengers in the lead. But Rubin battled right back, using a timely Unfriendly Fire to provide the final points off damage to finish off Robinson.

That sent it into the decider – a game three between David Pargh and Sigrist, the 2014-15 Player of the Year. The game they delivered was an epic affair to end Day 1 of Grand Prix Providence. 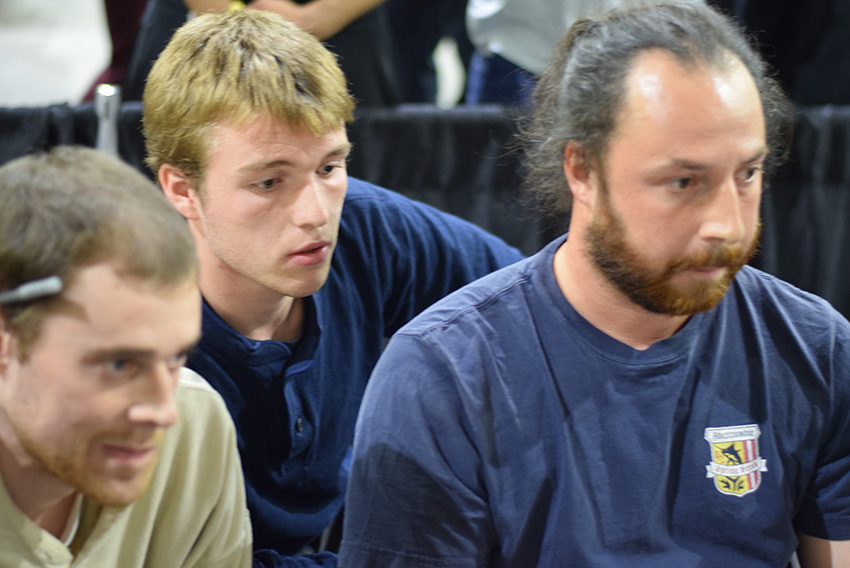 Billy Pargh, Connor Robinson, and David Pargh faced their toughest match of the day in their attempt to run the table.

Pargh's green-blue deck full of value creatures and tricks squared off against Sigrist's aggressive White-Black Vampires deck, and the vamps began the beatdown early, as an array of tokens and combat tricks knocked Pargh all the way down to three life.

But Tishana, Voice of Thunder was a godsend off the top, drawing Pargh several cards and allowing him to finally even the board state. Tishana bit the dust a turn later in blocking, but it gave him plenty of gas to work with. Most importantly, that included Shapers of Nature, and with the board full of lands he now controlled, that meant a streaming source of card advantage if Sigrist couldn't find a way through.

As Sigrist failed to find what he needed to finish things off, Pargh slowly began turning the corner. An unanswered Daring Saboteur grew huge with the help of the Shapers of Nature, and even Sigrist's inflated life total thanks to lifelink was soon threatened. In the penultimate turn, a desperation attack with his 1/1 lifelink tokens gave Sigrist the life he needed to survive one more draw step, and with lethal staring him down he drew for the turn.

Exactly the card Dem Boys needed. Sigrist moved to the beginning of combat, with three attackers ready to provide the triggers to end the game.

Right into Run Aground. Pargh had the perfect answer at the perfect time, and with that Sigrist extended his hand, congratulating the upstarts on their victory.

Not that it should be all that surprising. Billy Pargh has been putting nearly 40 hours a week into Magic for most of the past year, and that work paid off. David has been on the Pro Tour a handful of times, and both Billy and Connor finished just outside the Top 8 at Grand Prix Toronto earlier this year.

Strong finishes, but just missing their goal. But Saturday in Rhode Island it all came together, and the trio – who drove from Ithaca in an RV and are bunking up in it overnight as part of their Magic road trip – stand alone at the top of Grand Prix Providence. 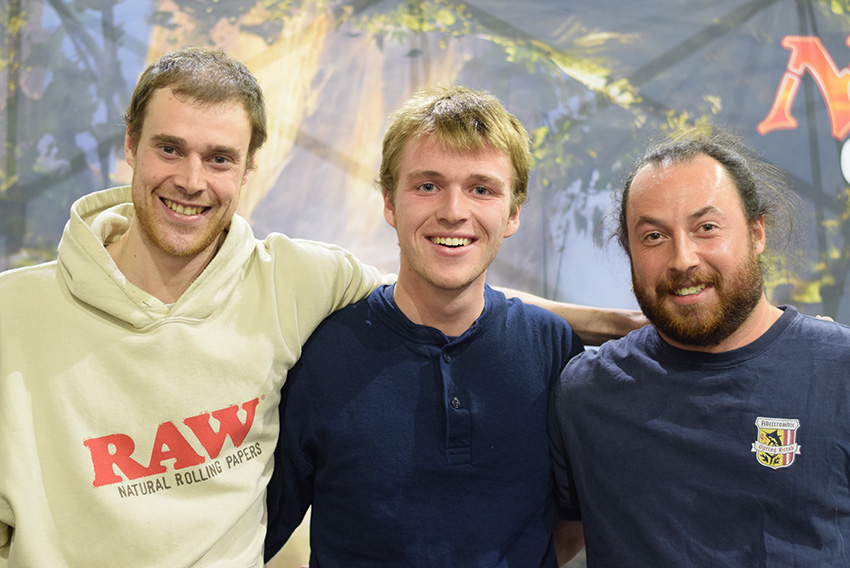