Grand Prix Providence has come and gone, and with it the release weekend of Ixalan. While some players battled in Standard in tournaments across the world, it was the full set of Ixalan that was on display at the highest level as more than 500 teams converged in Rhode Island to compete in Team Limited.

And by that, I mean compete for the three Top 4 slots not belonging to Peach Garden Oath– Reid Duke, Owen Turtenwald and William “Huey” Jensen, who everyone had as the favorites coming. Things looked shaky for the trio after taking two losses on Day 1, but to no one's surprise they pulled through with a 5-0 run on Sunday to lock up their expected finals berth, marking an incredible seventh Top 4 in 12 team events.

But there was far more to the weekend than just the Top 4. Here are the stories that stood out from Grand Prix Providence.

Ixalan offered players a glimpse into a brand-new world, one complete with Pirates, Dinosaurs, Merfolk and Vampires. The first heavy tribal set in several years, players across the world have immediately taken to the set and the flavor. And I’m not just talking what is obviously the best tribe ever conceived in Merfolk (well, my favorite, anyway), but who doesn’t love swashbuckling with Pirates or romping with Dinosaurs?

And the Dinosaurs did plenty of that this weekend.

Red-Green or Green-White Dinosaurs was one of the defining Sealed Deck archetypes of the weekend. With access to 10 total packs to build from, teams divided up into decks that usually featured three of the four major Ixalan tribes. The result was Vampire decks that flooded the board with tokens, Merfolk decks that got very tricky with counters and River Herald’s Boon, Pirate decks drowning in treasure or Dinosaur decks that simply Savage Stomped all over opponents.

It’s just our first foray into this new world, and it will be exciting in the next few weeks to see where the set goes, both in Limited and Constructed.

Longtime coverage guru and host Rich Hagon has sat with many cohosts in the booth over the years. Few made an impression quite like this weekend’s.

You can meet him for yourself. 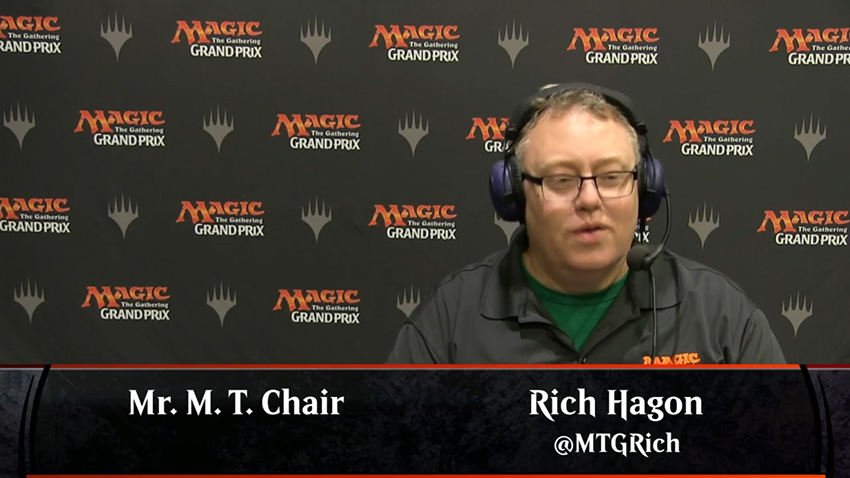 The joke was a viral sensation this weekend, and fans had to meet this new host for themselves. And, of course, get a signature.

There you have it – Magic tournaments aren’t just about the high-level competitive (though there’s plenty of that). Sometimes, Grand Prix are just about having a little fun. 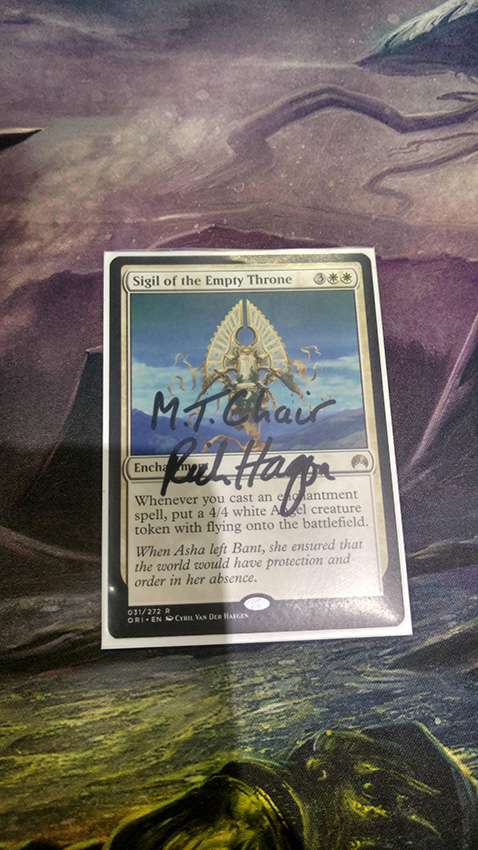 They say Magic is a mind game – sometimes it’s about more than just the cards on the table. Few know that better than Osyp Lebedowicz, the three-time Pro Tour Top 8 competitor (and winner at Venice in 2003), and in a high stakes feature match against Hall of Famer Owen Turtenwald, he showed exactly why Magic can be played at a different level – and how to have fun doing it.

The play was a bluff – not that Turtenwald could reasonably make the block, given the value of not losing his Shaper of Nature to a combat trick – but it was also a moral victory for Lebedowicz, who celebrated the play like he had just won the match – or the Pro Tour, for that matter. He had his teammates, viewers and even the stoic Turtenwald cracking up at the outburst, and it was certainly one of the most fun moments of the weekend.

Team Grand Prix are beloved by the Magic community. Few things are better than laying a tournament with friends, and win or lose there’s always friends to celebrate it with – or at least to share in the disappointment.

Of course, for the fabled Peach Garden Oathof Duke Turtenwald and Jenson – the world’s fifth, 10th and 14th ranked players, respectively – making the Top 4 was old news, as they battled back from a "slow” 7-2 start to go undefeated in the back half of the tournament to advance to their incredible seventh Top 4 in 12 team events.

Joining them there, improbably but perhaps no unexpectedly, was the team of Martin Juza, Corey Burkhart and Andrew Baeckstrom. Juza and Burkhart lost to Peach Garden Oathin the finals of the last team Grand Prix in Cleveland earlier this year, with Hall of Famer Shuhei Nakamura as their third. That certainly put the pressure on Baeckstrom, a Pro Tour regular who lacked the resume of Nakamura but boasted a pair of Grand Prix Top 8 appearances himself, most recently at San Antonio earlier this year. 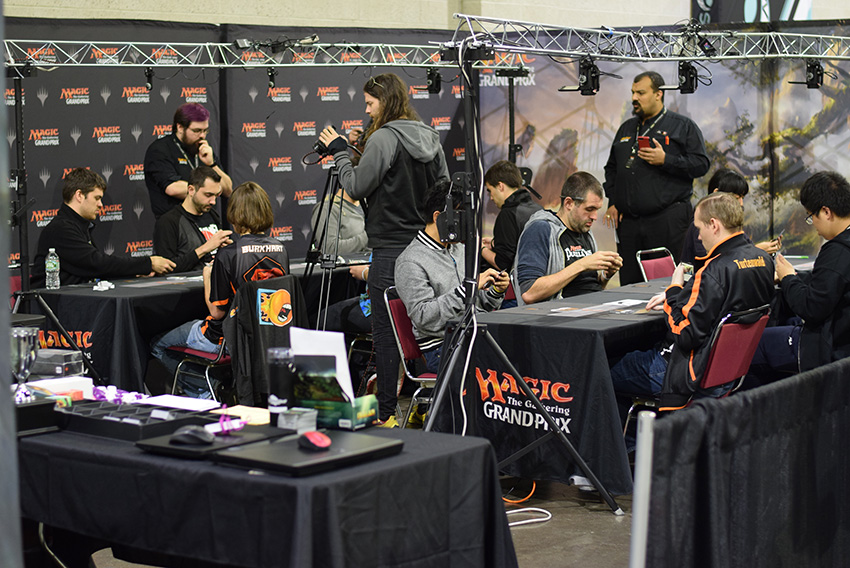 Two matches, four teams – two groups of pros, two of amateurs. A combined 102 Grand Prix Top 8s on one side, a total of exactly one on the other. Truly anything can happen in Magic.

With half of the Top 4 essentially a repeat, you might expect two other teams of top pros to join them – after all, historically strong teams in Matt Sperling, Paul Rietzl and David Williams plus Jacob Wilson, Matt Nass and Sam Pardee were in attendance, among others. With so many teams of pros in the room, anyone else making the Top 4 would be a shock.

But don’t tell that to the teams of Lucas Muxi Li, Zile Yao and Haoran Ling – with just one Grand Prix Top 8 appearance among them. 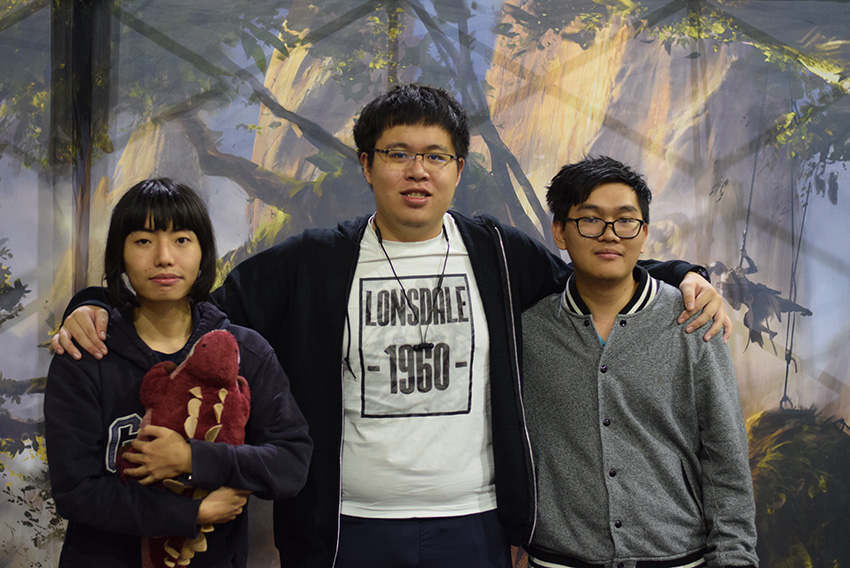 Or or Will Sullivan, John Twardowski and Cody Delpozzo, who somehow made the Top 4 with a combined zero previous Grand Prix matches between them.

You read that right – zero. The trio made the trip from Albany, New York to play in their first Grand Prix ever, and the result was nothing short of incredible.

“Team events seem like the best, so we decided we wanted to give it a try," Sullivan explained. “We’ve been friends since we were kids and playing Magic together the last few years. It’s been a great experience."

No kidding. Next stop for the trio? Pro Tour Rivals of Ixalan, thanks to their incredible run in Providence. 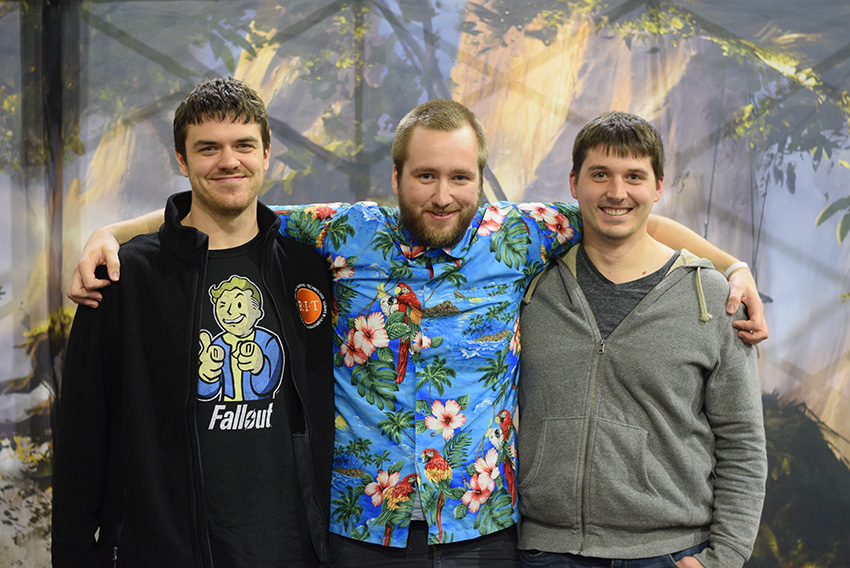 A Trophy, at Last

Corey Burkhart is one of the best technical players in Magic. A game designer himself, Burkhart has six previous Grand Prix Top 8 appearances. But despite the impressive resume – plus being known as the best Modern Grixis Control player on the planet – Burkhart has never earned a trophy for his mantle.

There have been plenty of near-misses. Finals losses at Grand Prix Dallas in 2016 and Grand Prix Cleveland earlier this year – to Peach Garden Oath, no less – weighed heavily on him. His goal for every event since has been singular: to win a trophy. Few players have played so long at the top without hoisting the trophy in the end, and Burkhart has been closer than most.

So it was fitting that after dispatching the first-timers in the semifinals, the finals would be a rematch of the last team Grand Prix. Who else but Peach Garden Oathwould await Burkhart, Juza and Baeckstrom in the finals?

And things looked bad early, as Burkhart failed to find lands as he fell quickly in the first game to Duke. But team events are popular for a reason, and his friends and teammates were there to help him.

In this case, that meant a quick match win for Juza over Jensen, as Baeckstrom went up a game against Turtenwald. And if he was feeling the pressure of being the “new” players on the team, Baeckstrom sure didn’t show it, and as he flew over Turtenwald’s army for the final points of damage to win the match – and the finals – for his team, the excitement from the trio overflowed. Juza embraced Burkhart in an animated hug, and with that the drought was over.

A nearly overwhelmed Burkhart summed it up rather simply after the match.

“It feels great," he said, a huge smile sweeping across his face. 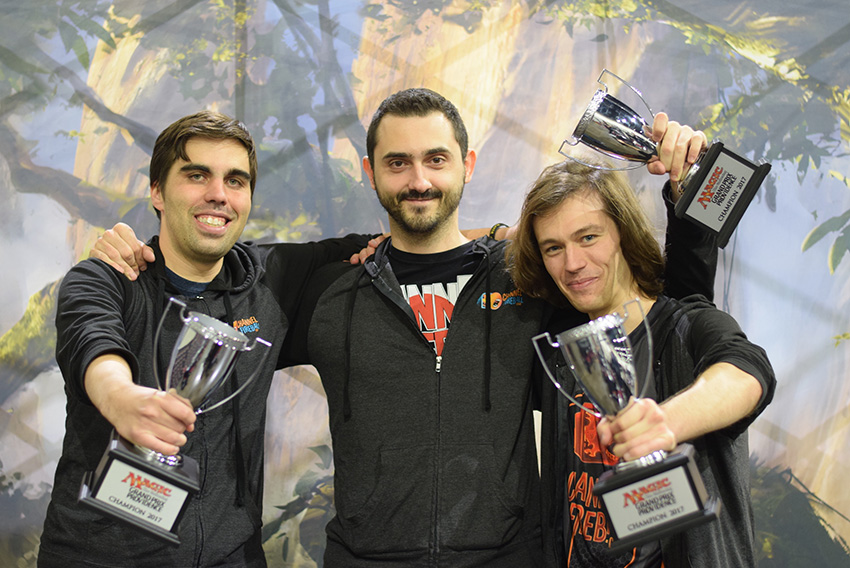