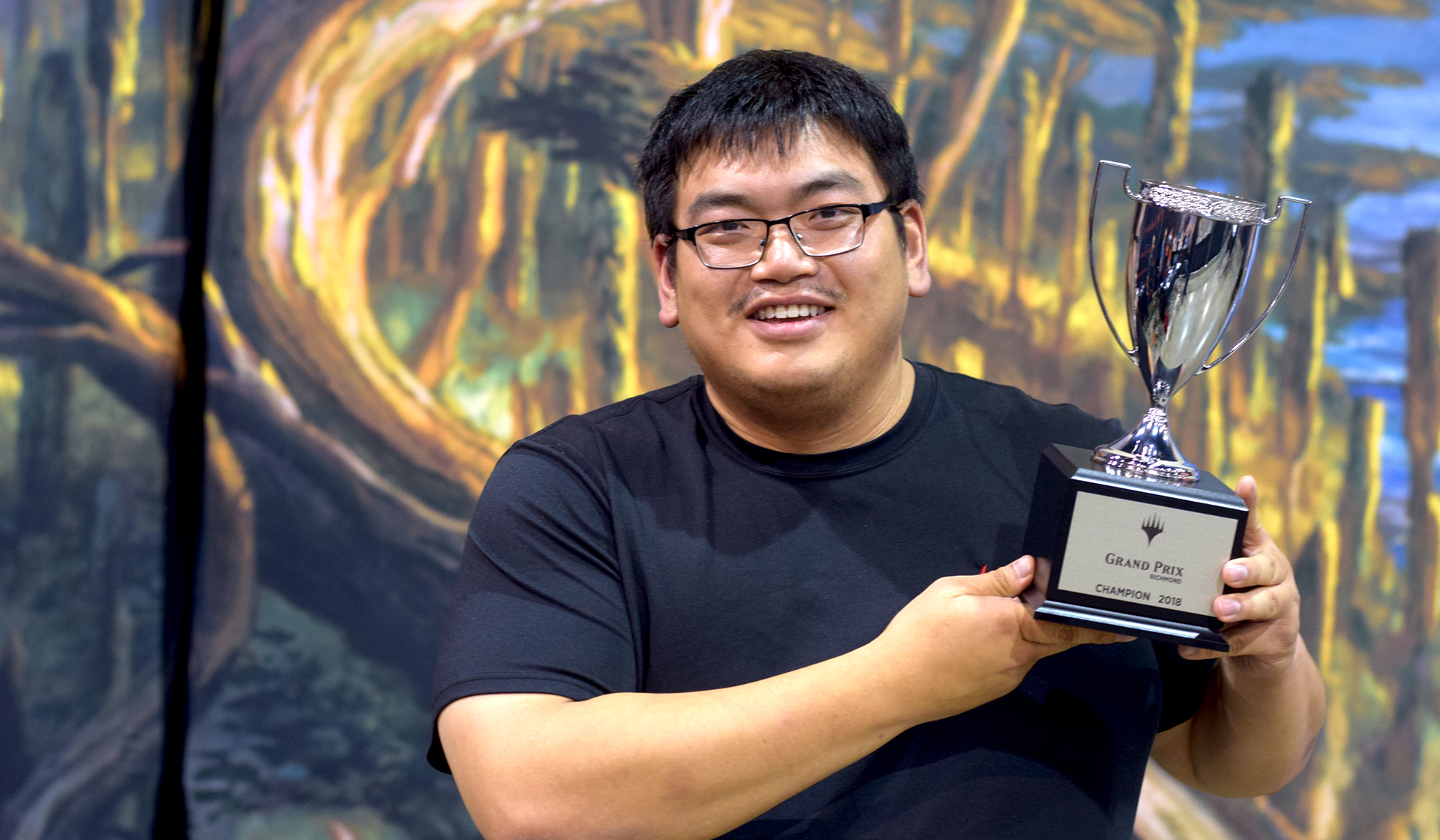 THE HASHTAG FOR GRAND PRIX RICHMOND IS #GPRICHMOND. JOIN THE CONVERSATION.

Alex Hon is your Grand Prix Richmond Standard Champion! Piloting Black-Red Aggro, he took out current Player of the Year leader Seth Manfield and former Player of the Year Mike Sigrist in the Top 8 and helped to cement this Standard as one where if you’re not red, you might just be dead.

Hon’s victory capped an epic weekend that started with the experiment of covering Reid Duke for every round of the Legacy Grand Prix. Even though Reid did not make it to the Top 8, his Ultimate Guard Teammate Andrew Cuneo did, where he made the most of his Top 8 by winning the whole thing. His three opponents in the elimination rounds? The three people Reid lost to in the Swiss.

It pays to have good teammates.

We also got a clearer picture of the Player of the Year Race. Reid Duke was not able to improve on his standing, but in his last round Luis Salvatto earned a victory to pull him into a dead heat with Duke for second place. They would have both been one point behind Seth Manfield if the Pro Tour Ixalan Champion had not made Top 8. His Top 4 finish has given him a three-point lead on the field with only two Grand Prix left to be played.

But Sunday was all about Hon, his Goblin Chainwhirlers and copies of Rekindling Phoenix. Congratulations to Alex Hon, your Grand Prix Richmond Standard Champion!

Yesterday we went back to basics with Andrew Cuneo's Legacy win. Today we started Standard swan song of Kaladesh and Amonkhet Blocks, crowned another Grand Prix champion, and saw a leader pull...

As the Standard season draws to a close and Guilds of Ravnica approaches, nearly 800 players decided to take part in the second tournament of Grand Prix Richmond, battling it out before the...

After 8 rounds the 786 players in the Standard Grand Prix Richmond were cut down to 171. After another 7 rounds, we have a Top 8! Name: Joe Stempo Age: 31 Occupation: Server Hometown:...

Just missing out on the elimination rounds were these eight players, who took their decks to the Top 16 of Grand Prix Richmond. ...

Day 1 of the Standard Grand Prix Richmond has drawn to a close. The field of 786 has been whittled down to 171. Leading the pack are seven undefeated players including Player of the Year contenders Seth Manfield and Luis Salvatto. With Reid Duke’s weekend done, Seth can extend his lead while Salvatto can strive to improve on his current third place status. Also entering Day 2 undefeated are Yoshihiko Ikawa, Alex Hon, Christian Hauck, Oliver Tiu, and Pierson Geyer. You can follow all the action live tomorrow, starting at 9am local time on twitch.tv/magic.