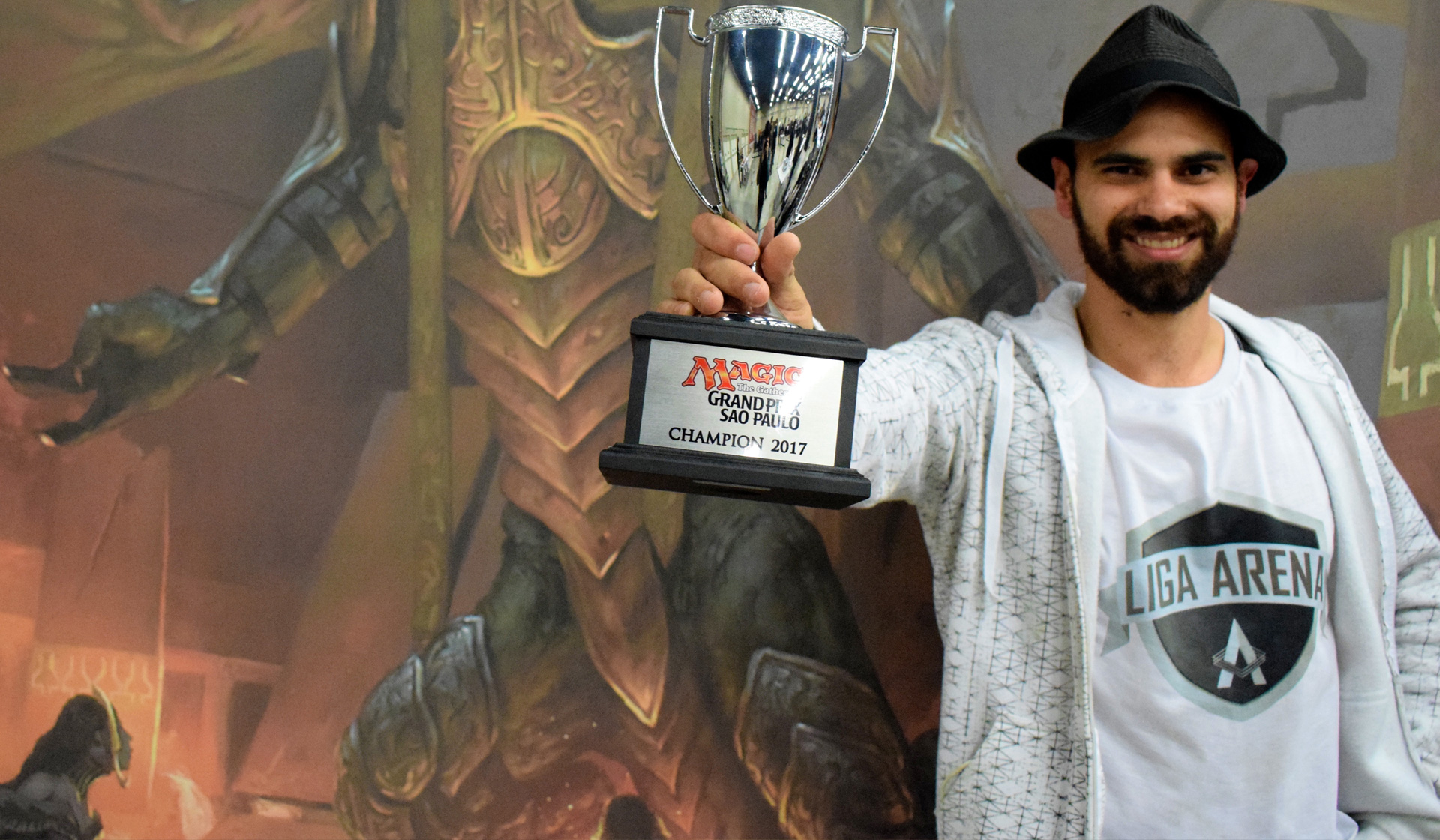 THE HASHTAG FOR GRAND PRIX São Paulo IS #GPSPAULO. JOIN THE CONVERSATION.

Exactly 1,200 players from around the region converged at São Paulo, each hoping to be crowned a Grand Prix Champion. By nightfall, local hero Joao Lelis hoisted the trophy, keeping the title on Brazilian soil.

Piloting Bant Knightfall, he first defeated Julian Reyes in the quarterfinals before dispatching Rafael Costa Zaghi in the semifinals. Then, Lelis faced off against Vitor Grassato’s Titan Shift deck, a matchup he did not like very much. Despite that, he was able to secure the victory in two swift games.

25-ranked Carlos Romao could have been dropped from the rankings but his Top 8 performance this weekend took care of that little issue. Making his tenth lifetime Grand Prix Top 8, he was the hot favourite to win it all, but fell in the quarterfinals in three tight games. Rounding off the rest of the Top 8 were semifinalist Danilo Ramos Mopesto and quarterfinals Jean Sato and Fabian Nunez, happy to be qualified for Pro Tour Ixalan in Albuquerque.

While many interesting tales were shared in the Day One Highlights, here are some more stories that shaped Grand Prix São Paulo 2017. Feliz Dia Dos Pais! Willy Edel and family Some of the most...

As it seems, we're down to just the final eight players! Arranged according to their Swiss standings after Round 15, let's take the quick look at what these players brought to the tables! Once...

In addition to the Top 8 decklists, we were able to translate and produce the Top 32 decklists with some extra helping hands. However, a catastrophe hit us sometime in the evening, when we were...

The field of 1200 players is now down to just 8. Let's get to know these talented players for a bit! Name: Danilo Ramos Mopesto Hometown: Londrina, Paraná, Brazil Age: 26 Score for Day 1: 9...

Take a look at which players' decks went undefeated on Day 1 of Grand Prix São Paulo. ...

Of the 1200 players, only three survived Day One with the perfect 9-0 record, namely Guilherme Lundgren, Danilo Ramos Mopesto, and Carlos Alexandre dos Santos Esteves. 329 made the Day Two cut and six more rounds of Modern Constructed will take place tomorrow.

At 8-1, the most notable names are former World Champion (25) Carlos Romão, (22) Thiago Saporito, Jonathan Melamed, Marcos Paulo De Jesus Freitas. (1) Paulo Vitor Damo da Rosa holds the highest tiebreakers for everyone at 7-2, a record which was also achieved by vetarans Vagner Casatti and Pedro Carvalho among others.

The double Modern Grand Prix weekend is just about to heat up! Stay around to witness the crowning of two more Grand Prix Champions, one in Birmingham and of course one here in São Paulo!

Exactly 1,200 players from around the Latin America Geo-Region gathered in São Paulo to compete in Modern Constructed, with Hour of Devastation in the mix! After nine rounds of Modern action,...

Do you want to earn two byes for the next Grand Prix you are attending? If so, you can consider participating in the Grand Prix Trials which take place the day before! A total of 30 Modern Grand...