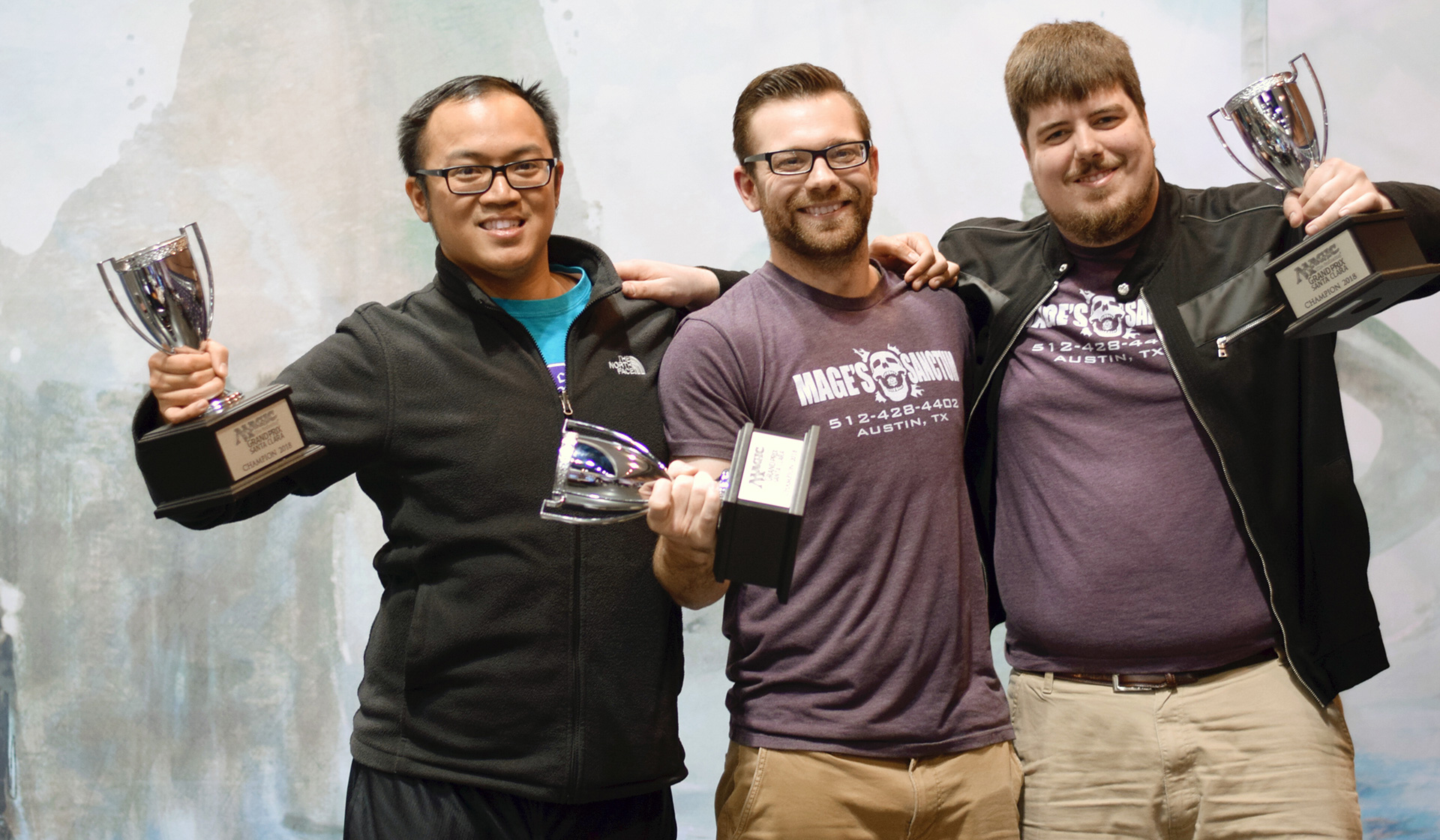 The trio takes down the entire tournament at Grand Prix Santa Clara.

THE HASHTAG FOR GRAND PRIX SANTA CLARA IS #GPSANTACLARA. JOIN THE CONVERSATION.

Grand Prix Santa Clara began with nearly 1,500 players, as Magic players from across the world braved long flights and bitterly cold weather across much of the United States to make the trek to sunny California for the Grand Prix premier of the Team Trios format. Bringing together Standard, Modern and Legacy into one tournament, friends and format specialists alike got their chance to make a mark on the first event of 2018.

In the end, it led to a Top 4 with both familiar and new faces. And in the end, it all came down to a third game in the Energy mirror between Logan “Jaberwocki” Nettles and William Ho. It was hard-fought, swingy game that featured both big plays and razor-thing margins. In the end, it was Chandra, Torch of Defiance that sealed the deal for Ho, who won the deciding game at just one life and propelled himself and teammates John Martin and Jeremy Frye to the Grand Prix title.

The first Grand Prix of 2018 is in the books, and it was a heck of a ride here in Santa Clara. Almost 500 teams showed up for the Grand Prix debut of Team Trios, and from start to finish the...

After two days of competition, it all came down to this – the Top 4. Two more rounds of Team Trios play to determine a champion, and these are the decks they found so much success with at Grand...

After fourteen rounds, only four teams of three remained in the running for the fame and the fortune, the titles and the trophies. Find out more about these people here! Jonathan Anghelescu /...

Just missing out on the Top 4 are these four teams, who all finished with strong records and placed in the Top 8 of the tournament. Here are the decks they chose to bring to the Team Trios...

This weekend started out in tumult. Snowstorms out of the northeast stranded many teams without a third, and sometimes even a second. This was a day of unlikely allies. The story of how John Rolf teamed up with Jacob Nagro and Allen Wu is one of the books (and well covered in our Day 1 Highlights piece). Interesting teams like Paul Rietzl and Andrew Cuneo and (19) Steve Rubin abounded throughout the hall.

But of course, some of the most stable teams also made strong first days, like the three-time Top 4 team of Jacob Wilson, (10) Sam Pardee, and Matt Nass—getting things done like they always do.

The first Grand Prix day of this Team Trios format—Standard, Modern, and Legacy—has been an amazing time, but tomorrow will be better. Because tomorrow, we'll get to crown champions!

Catch us at twitch.tv/magic tomorrow! See you then!

Welcome to 2018! The last year has been a busy one for Magic, but with a fresh year on the way there's sure to be more of the best Magic can offer – and quite a lot of it is on display this...