The first Grand Prix of 2018 is in the books, and it was a heck of a ride here in Santa Clara. Almost 500 teams showed up for the Grand Prix debut of Team Trios, and from start to finish the tournament was packed with wild action in every major Constructed format. From Standard to Modern to Legacy, every archetype across the spectrum was represented, and delivered us quite a show.

Here are the highlights that stood out from the weekend.

The Long Road to Santa Clara

California may be sunny, but the road here for many was not – at least for those who made it at all. Take the story of John Rolf, Jacob Nagro and Allen Wu – the team that was never meant to be but at the same time destined to be.

Wintery and bitterly cold weather grounded flights across the United States this week, as subzero temperatures made escaping to the sunny west coast an impossibility for hundreds of Magic players. Friends but not teammates entering Santa Clara, all three thought they had dodged weather problems – Nagro and Wu were due to team with Hunter Cochran, who had braved the weather and made a standby flight from the east coast. Rolf's usual teammates – Brandon Ayers and Nathan Smith, were coming from the middle of the country and also successfully boarded their flight.

Then disaster struck en route. After somehow dodging the weather problems plaguing the country, it was a mechanical failure that ruined it all – stranding all three in Salt Lake City as the flight they were sharing to San Jose was canceled. That left Rolf in Santa Clara without teammates and without a deck, which he learned at 10:30 p.m. as he was headed to bed. And Nagro and Wu had a Standard deck but were down their Standard player.

Serendipity, it turns out. Rolf was the Standard player they needed, and he was set to play the same deck the duo happened to have lying in wait for Cochran. Just like they had planned it from the start, the team started hot and cruised to a cash finish in 21st place. 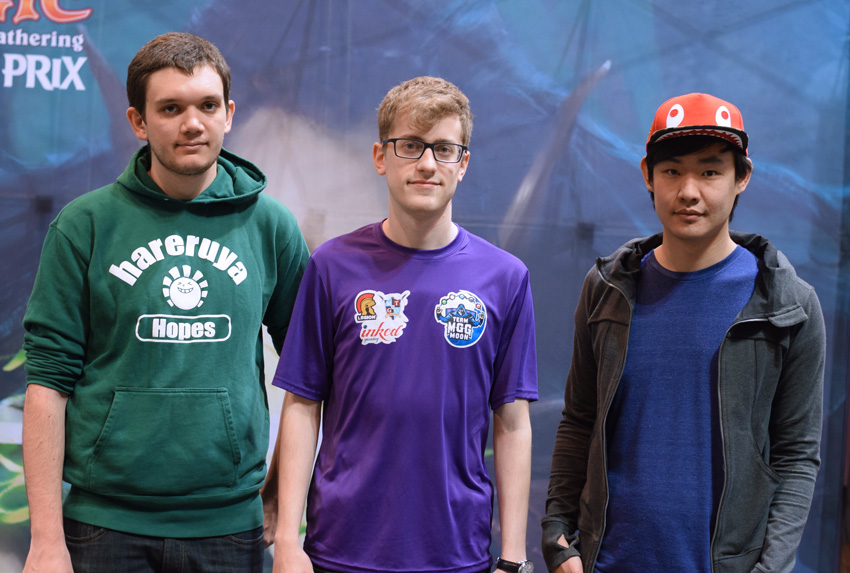 Jacob Nagro, John Rolf, and Allen Wu were an unlikely team, but they made the most of it in Santa Clara.

Pauper is one of the more unique Magic formats – it's made up entirely of commons. It's become increasingly popular recently, and received a major form of support in Santa Clara, where it was added to the side events schedule by popular demand.

And the Pauper community turned out.

Over 120 people playing in the #gpsantaclara Sunday Pauper side event!!!! #mtg

A format rife with innovation, there are dozens of popular deck archetypes in Pauper, and if its debut at Santa Clara is any indication, we'll be seeing plenty more Pauper in the future.

Magic events are always something different to everyone – and for hundreds of people every weekend at Grand Prix around the world, the event is so much more than just a tournament.

That was the story for Eric, Kristina and Peyton Wendorf, Sacramento natives who made the most of a Grand Prix within driving distance by discovering together that Magic is more than just a game they can play at home. Eric is an avid Magic player while his wife Kristina has played just a handful of games in her life, but it is their 8-year-old daughter Peyton who is Eric's most frequent opponent.

"Usually Eric goes to events and I just tell him to have fun, but when Peyton wanted to play we wanted to do it as a family," Kristina explained. "I've played maybe five games in my life before today, but we're having a lot of fun out here."

The family didn't win many rounds, but they played all they could. After all, this tournament is something to different to everyone, and for them it was a lifelong memory in the making.

"Everyone we've played against has been great about just having fun and helping Peyton learn as she goes," Eric said. "It's really been a great experience all around." 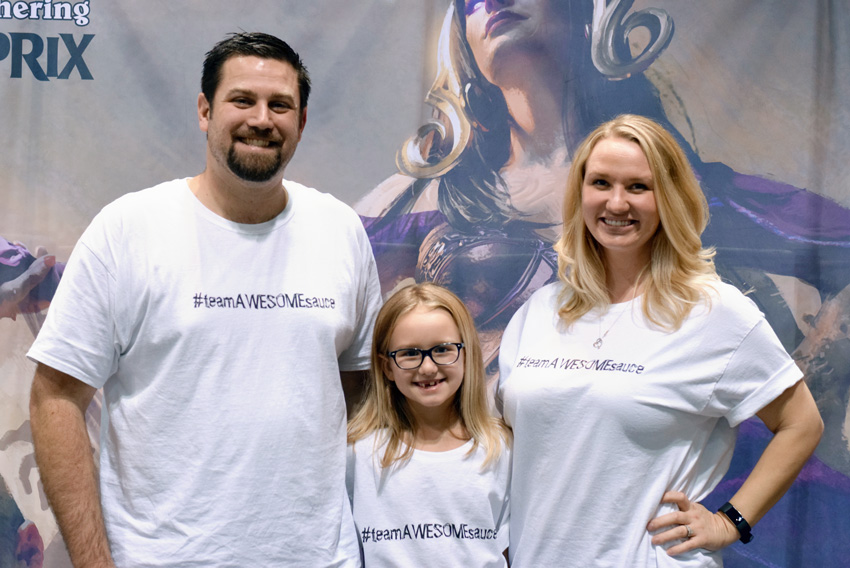 With so many different formats on the table at Grand Prix Santa Clara, players came armed with everything possible, from the wild White-Blue Cycling deck in Standard to Mono-Blue Living End in Modern to Kobolds in Legacy. Walking up and down the aisles throughout the tournament was a fascinating look back at 25 years of Magic cards.

And for one team, their unconventional choices paid off perfectly.

That would be the Top 4 team of Isaac Sears, Galan Falakfarse and Dan Mabee. While they did what most teams did and brought Temur Energy in Standard, they went much more off the radar with Falafarse's Modern deck and Mabee's Legacy choice.

Falakfarse brought out Mardu Pyromancer in Modern, arming himself with a deck capable of quickly filling the board with Young Pyromancer tokens with a stream of instants and sorceries that also perfectly fueled the late-game reload Bedlam Reveler. But the true strength of the deck is its ability to play the control game as well when needed, with Faithless Looting smoothing out draws and a mass of discard and removal spells holding down the board. It's not a common choice in Modern, but Falakfarse showed it can be a potent one.

If going wide with Young Pyromancer tokens isn't your thing, how about a turn two 20/20 instead?

Urborg, Tomb of Yawgmoth and Dark Depths can fuel a second-turn Vampire Hexmage, and Marit Lage can win the game as early as the third turn – which is exactly what Mabee did during the team's win-and-in match for the Top 4. But as powerful as the deck can be, it was another unusual choice in a world of Delver of Secrets, Leovold, Emissary of Trest and Deathrite Shaman.

Regardless, it worked perfectly for the team, and propelled them all the way to the Top 4. 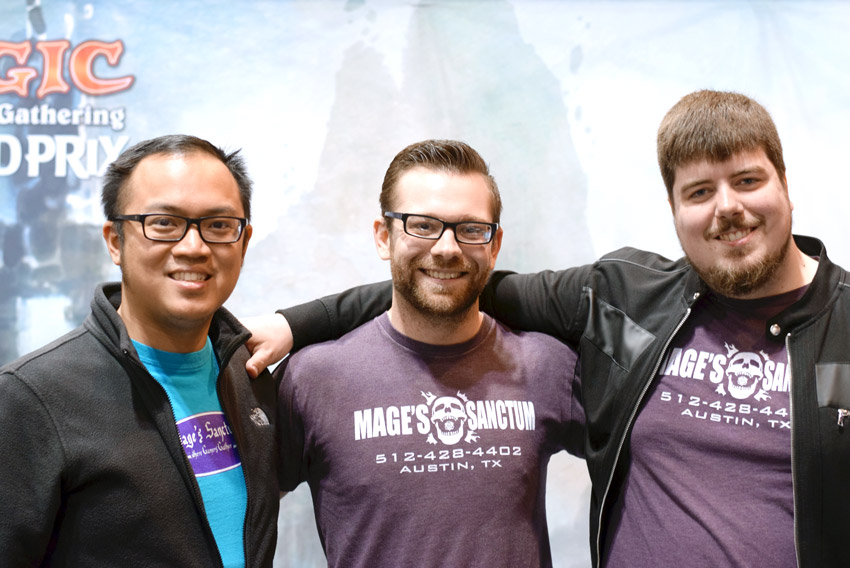 In the end, it all came down to Standard. After John Martin knocked off Vidianto Wijaya in Modern and Jonathan Anghelescu returned the favor in Legacy to tie the finals at one match apiece, it all came down to William Ho squaring off against Logan Nettles – the feared Magic Online expert "Jaberwocki" himself – in an Energy mirror to decide it all.

Of course, Wijaya never expected to find himself here. He had played exactly one team event in the past, and hadn't enjoyed it much. But drawn by the allure of Team Trios, he went looking for a team – and found it thanks to a nod in the right direction by Eric Severson. Anghelescu flew in all the way from Germany to play in the tournament, and Wijaya was thrilled to find out their third was Nettles. The team may have never met each other before the tournament, but things had worked out anyway with a trip all the way to the finals. 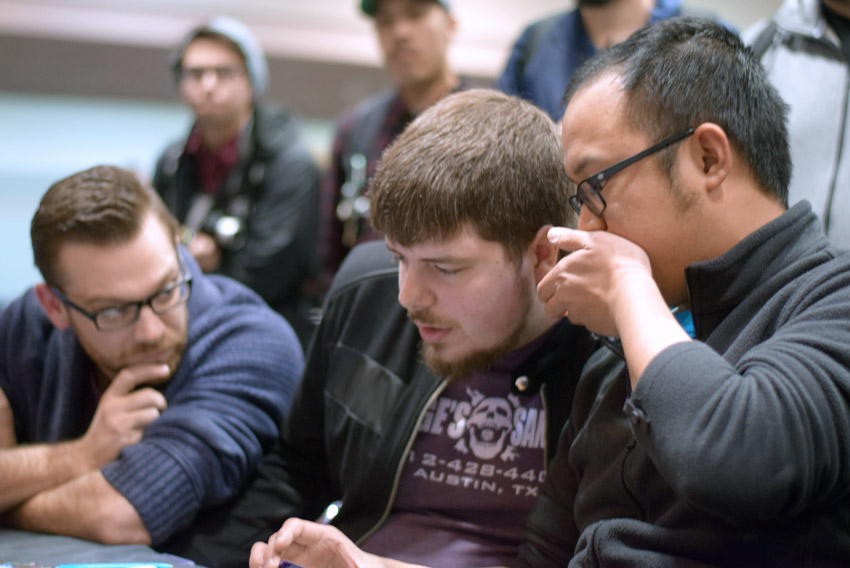 A third and final game would decide things – and did it ever deliver. It was a wild swing back and forth from start to finish, and it eventually came down to one of the swingiest two final turns in recent memory.

Facing down Vraska, Relic Seeker with eight loyalty and a board of small creatures with nothing of his own, Nettles went deep into the tank to try and find a way to claw back into the game – and then went for it with gusto with the back half of Commit // Memory, with each player drawing seven new cards. Whirler Virtuoso gave Nettles a way to survive, and attention swung back to Ho and his dominating board state. But as good as his board was, it wasn't enough to win. He knocked Nettles down to 7 life, and simply passed the turn back content to hold up Negate.

And then came River's Rebuke. Specifically, River's Rebuke backed up by Supreme Will. Suddenly, Ho's dominating board state was no more – in fact, he had no board at all. And after the Virtuoso and Thopters did their work Ho had just two life and low on energy.

He did all he could to battle back. Servant of the Conduit into Bristling Hydra into Whirler Virtuoso gave him enough energy to create three Thopter tokens, but tapped out, that still left him dead to any removal or Glorybringer off the top of Nettles' deck.

That meant the attack only knocked Ho to one, and while Nettles found Negate to counter Vraska, the Chandra that followed was enough to finish things off and make Martin, Frye and Ho the champions of Grand Prix Santa Clara. 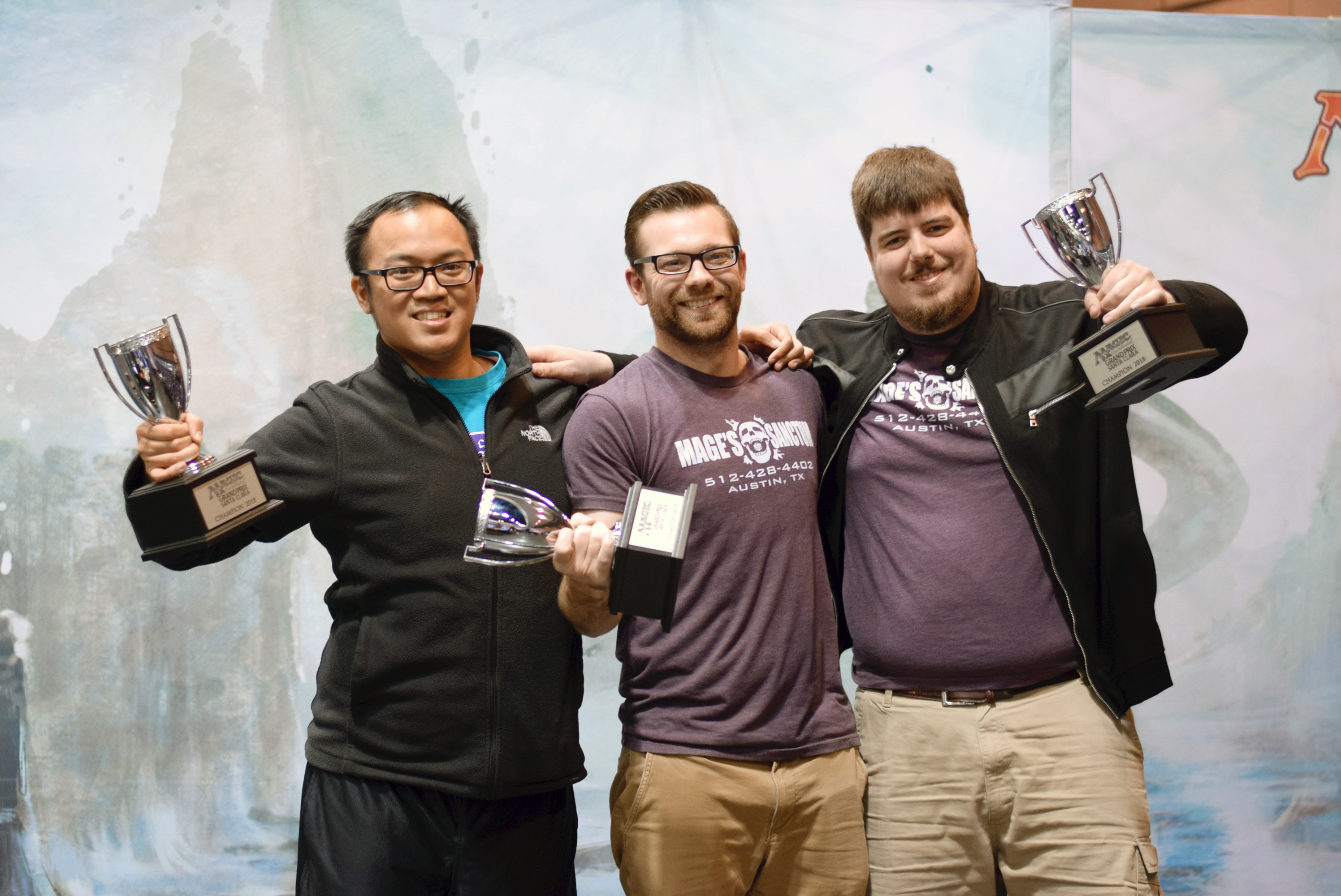