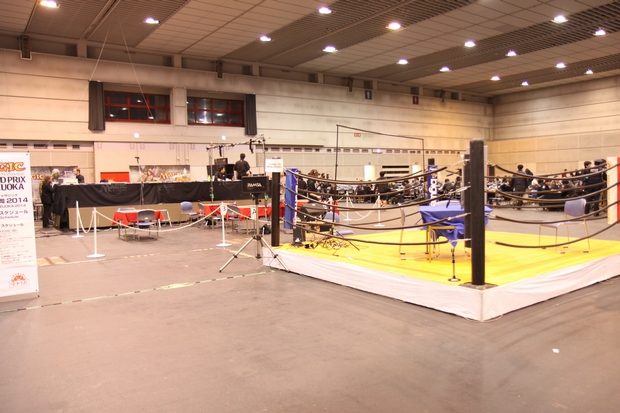 he cruel blade has fallen, and where once there were 1784, now there are only 228. Japan's pro community has performed to expectations, putting many big names across into Sunday's competition, but tonight belongs to the undefeateds. Six players managed to put up perfect records: Kazuki Mutou, Ryo Nakada, Masayasu Tanahashi, Shota Takao, Toshiaki Murata, and Kazuto Mochiki.

Of these, Tanahashi is probably the best known, with his Top 8 appearance at Pro Tour Kyoto in 2009. They've given themselves Pole Position, but who among them will be able to close out the race to the Top 8. Hot on their heels will be such names as 7th Ranked Yuuya Watanabe, former Player of the Year Shouta Yasooka, and captain of the last year's World Champion Chinese Taipei team, Tzu-Ching Kuo. There won't be any room for error.

The field today was wide-open, with decks from every stage of the Standard metagame's evolution since the Pro Tour. There seemed to be a lot of islands in play, both from Mono-Blue Devotion and Esper Control. Tomorrow we'll have a clearer picture of what's been winning as the players fight through six rounds to the Top 8. Will Watanabe finish strong to gain ground in the Player Rankings? Will an amateur shock the world? Tune in tomorrow for all the action!

4 Ethereal Armor 4 Chained to the Rocks

4 Chained to the Rocks 4 Mistcutter Hydra

2 Chained to the Rocks 1 Legion's Initiative

4 Thoughtseize 3 Duress 3 Soldier of the Pantheon

1 Erebos, God of the Dead 2 Archangel of Thune
75 Cards

4 Thassa, God of the Sea


Week after week, tournament after tournament, Standard continues to evolve. What started as a battle between Mono-blue, Mono-black, and Mono-red Devotion decks at Pro Tour Theros and Grand Prix Albuquerque, has formed into a diverse metagame in the past few weeks. As mono-color strategies become stale, players have gotten more greedy and have started reaching out to other colors. Due to these changes, aggressive decks and control decks have adapted to take a solid footing in the format.

Marlon Gutierrez added white to his Mono-black devotion deck and became champion at Grand Prix Dallas/Fort Worth. One of the toughest cards for the Mono-black Devotion decks to deal with is Blood baron of vizkopa . While Marlon had to drop Gray Merchant of Asphodel from his deck to make room for the vampire, it paid off. Being able to have a nigh-unkillable 4/4 against the Mono-black menace allowed him to take games he otherwise wouldn't have been able to.

While for the most part Mono-blue Devotion decks have remained Mono-blue, Charles Lancaster put up a top 16 performance at Grand Prix Dallas/Fort Worth with an blue-white devotion deck. Being able to add Detention Sphere and Sphinx's Revelation ostensibly gave him a better matchup versus Mono-black Devotion as well as aggressive strategies that have gained popularity at recent tournaments.

Speaking of aggressive decks, red decks of one form or another continue to put up good results. Due to their good matchup against Mono-black and black-white, these decks put two players in the top eights of both Grand Prix Dallas/Fort Worth and the Star City Games Invitational. Whether they're burn heavy, like Darin Minard's deck, or devotion based, red continues to be able to do what it does best: close out games as quickly as possible.

Two other aggressive decks have seen success in the past couple weeks as well: Orzhov Aggro and green-white aggro. Both of these decks use Banisher Priest to remove key opposing creatures while getting in damage with undercosted white creatures. Ben Stark, Orrin Beasley, and Josh Utter-Leyton had success with the Orzhov deck at Grand Prix Dallas/Fort Worth. The stand-out in their deck was Xathrid Necromancer . Once out, the Human Wizard made it tough for the opponent to efficiently deal with any of Orzhov's creatures.

At the Star City Invitational, Andrew Shrout had success with his green-white aggro deck. With maindeck Skylasher and Mistcutter Hydra , Shrout made it clear that he had no intention of losing to blue decks. Additionally, he found a place for Boon Satyr and Voice of Resurgence --cards that previously did not have a home in standard. Armed with a quick clock and resourceful creatures, Shrout took fourth place.

Finally, the composition of control decks have changed over the past tournaments. The once dominant Esper Control deck that Guillaume Wafo-Tapa rode to a fifth place finish at Pro Tour Theros has been replaced by a solid two color blue-white control deck. Huey Jensen piloted the creatureless control deck to a second place finish in Fort Worth. With its only win condition being one of its planeswalkers, the blue-white control deck aims to control the game with Sphinx's Revelation , Supreme Verdict , and counterspells, before reloading with a singleton Elixir of Immortality .