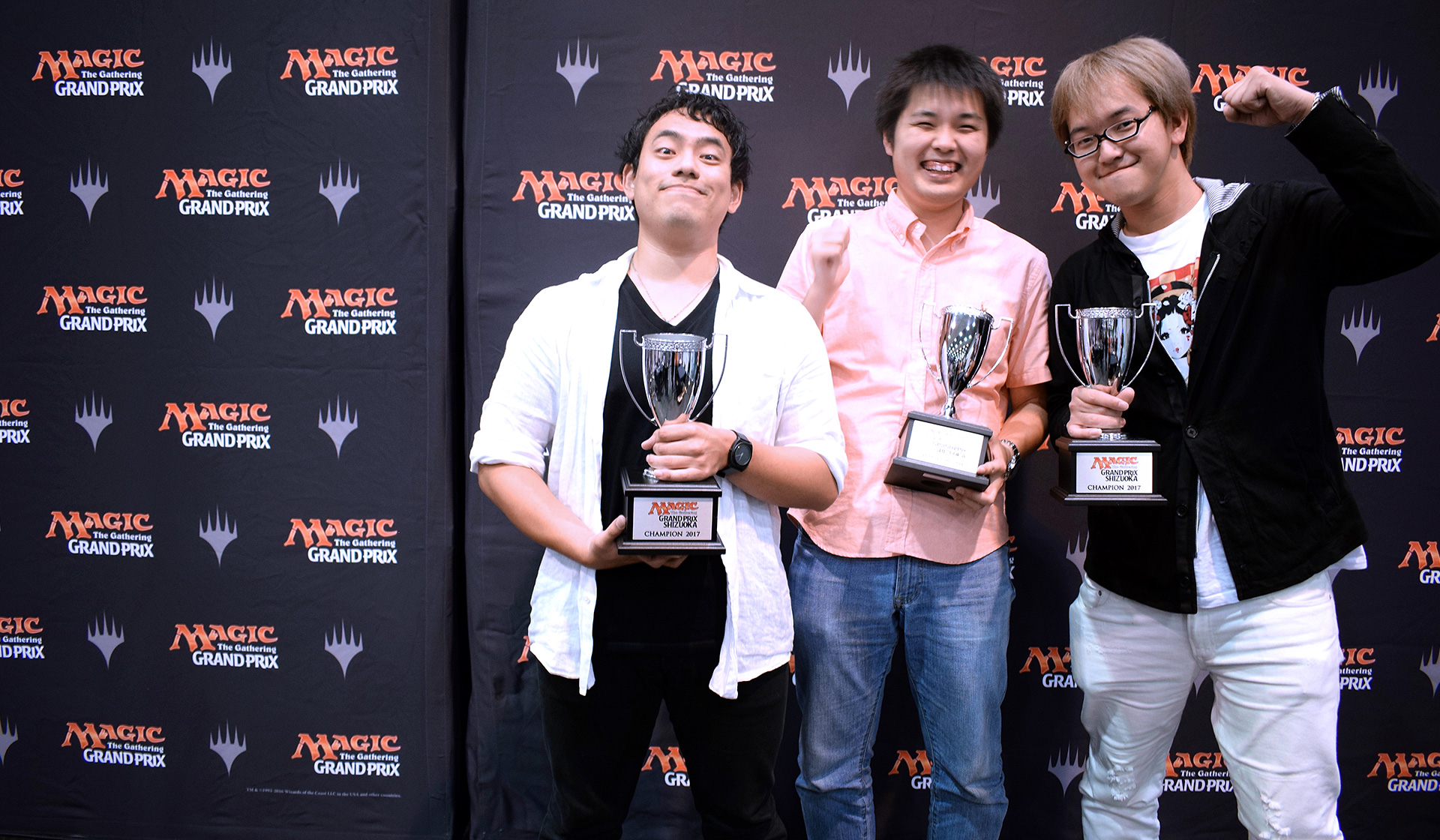 THE HASHTAG FOR GRAND PRIX SHIZUOKA 2017 IS #GPSHIZUOKA. JOIN THE CONVERSATION

After fourteen rounds of Swiss and two skill-intensive Team Drafts, only one team towered above the field of 558. From among 1,674 players, the trio of Michio Abe, Syo Hayakawa, and Kentarou Tachibana rose to the top to become the champions despite being the underdogs in the playoffs.

Prior to this weekend, none of them had a single Pro Point to their name. Today, they each earned a Grand Prix title! Counting the lifetime Pro Points of all six of their opponents in the Top 4, the total came up to 2197!

To achieve victory, they had to defeat (12) Kelvin Chew, (16) Lee Shi Tian, and Jeremy Dezani in the finals (they were also the only team in the Top 4 to be wholly comprised of Grand Prix winners) as well as dispatch the superstar team of (9) Yuuya Watanabe, Hajime Nakamura, and (7) Shota Yasooka.

Fresh off a Top 4 performance at Japan Nationals, Watanabe was gunning for his eight Grand Prix title to overtake Kai Budde and Shuhei Nakamura but this dream would have to wait for another day. Rounding off the Top 4 were Daisuke Ishii, Sugaya Hironobu, and Yukio Kozakai, a team comprised of two Grand Prix Champions.

Once again, hearty congratulations to Michio Abe, Syo Hayakawa, and Kentarou Tachibana! They have teamed together for every team event since 2013. Together they stood, together they won, and together they took it all home for Japan.

A total of 1,674 players, or 588 teams, gathered in Shizuoka for the third Premier Event to take place in this city this year - the first being Grand Prix Shizuoka (Spring) and the second being...

The Ixalan Limited format is still fresh and there is plenty to explore! Let’s take a look at the Top 2 teams’ finals draft decks. What archetypes did each player end up with? ...

After fourteen rounds of Swiss, only four teams made it to the top from among 558 others. From 1674 players, we are down to the final 12 players. Which of these teams will win it all? The Top 4...

Jace might have wound up alone in Ixalan, but everyone in Shizuoka this weekend was among great company! As one of two Team Limited Grand Prix this weekend, hundreds of teams made their way back to Shizuoka to explore the world of Ixalan. This also marked the first time that a Grand Prix was taking place during an expansion’s release weekend.

After nine rounds of showdowns, only a single team went 9-0. Team Yao-Kuroda-Omonishi consisted of Shunsuke Yao, Pro Tour Kobe 2004 Champion Masashiro Kuroda, and Kojiro Omonishi. For reference, they also went undefeated at the previous Team Limited Grand Prix which they played together and that was Grand Prix Kyoto 2016. Lucky coincidence? I think not. More like sheer skill and great teamwork!

Relentlessly giving chase were the eight teams at a 8-1 record, notably the superstar trios of (12) Kelvin Chew, (16) Lee Shi Tian & Jeremy Dezani and (9) Yuuya Watanabe, Hajime Nakamura & (7) Shota Yasooka. Kentaro Yamamoto, Hiroaki Kitahara & (23) Ken Yukuhiro barely scraped into Day 2 at 6-3, but this meant that all five ranked players in the room all made the Day 2 cut (and were also all headed for the upcoming World Championships in Boston).

With just five more rounds to go tomorrow, the climb to the top was getting increasingly weary. As we send everyone back home for some respite, the show had just begun at Grand Prix Providence 2017 (create link to GP Providence), where a few hundred more teams continue to brave the unknown!

A total of 1674 players, or 588 teams, gathered in Shizuoka for the third Premier Event to take place in this city this year - the first being Grand Prix Shizuoka (Spring) and the second being...