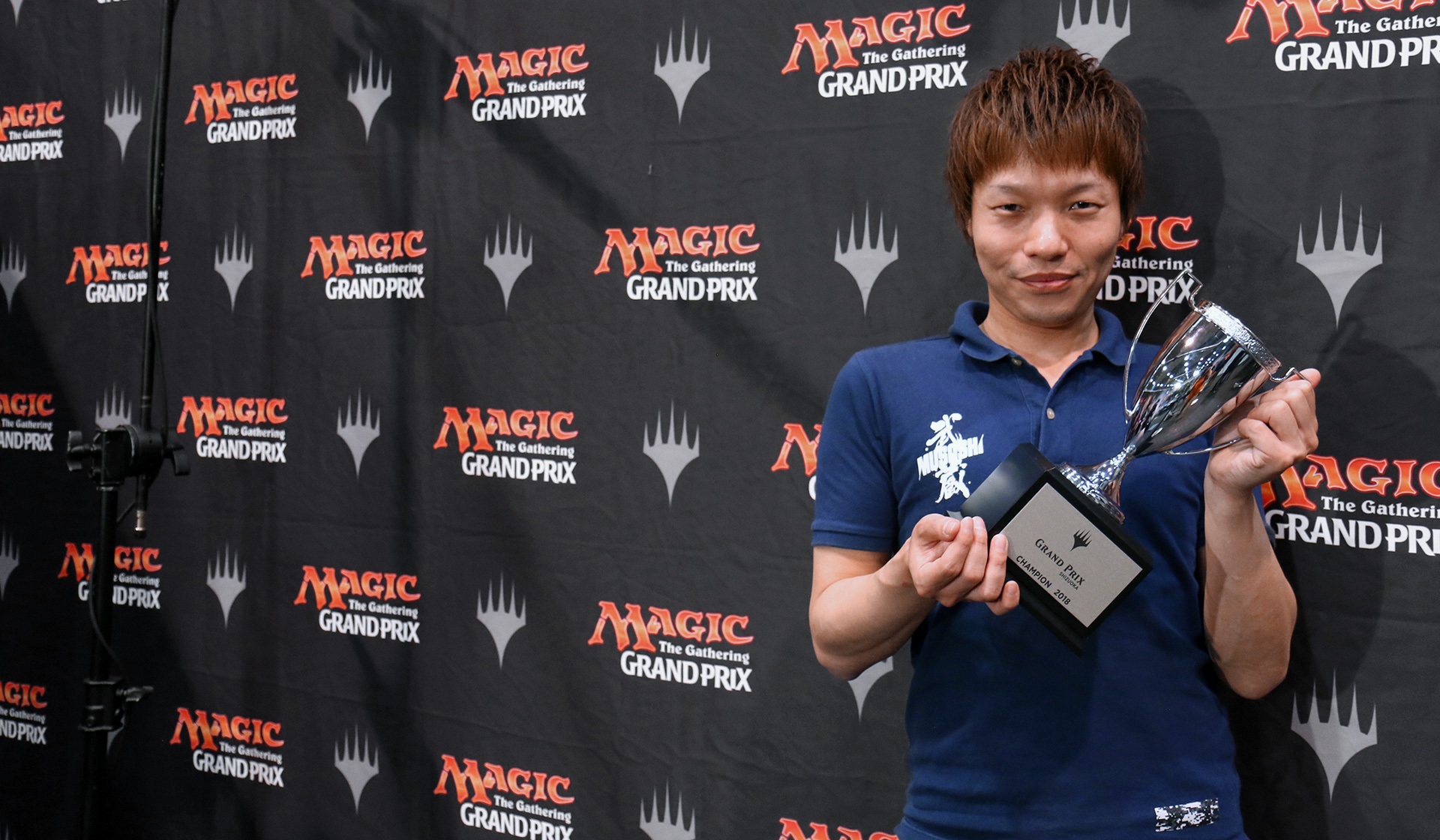 The hashtag for Grand Prix Shizuoka is #GPShizuoka. Join the conversation.

1429 players took part in this weekend’s Legacy Grand Prix here in Shizuoka. After eighteen rounds, it was Teruya Kakumae who triumphed!

This marked his third Grand Prix title in his fourth trip to the Top 8 playoffs. Piloting Eldrazi Stompy, he had to defeat Akihiko Shiota in the quarterfinals, and then Takahiro Ishikawa in the semifinals, followed by Hiroyuki Kaga in the finals.

Pro Tour Hall of Famer Kenji Tsumura also made the Top 8 after a six-year hiatus, and the occasion was even more momentous when he made it together with his lifelong friend and teammate, Yuuya Hirosawa. If they had both won their quarterfinals, they would have been paired against each other in the semifinals. However, both seasoned veterans fell in the quarterfinals! Rounding off the Top 8 were first-timers Toru Takisaka, and Yuta Yangisawa, who were both elated to have qualified for their first Pro Tour!

Once again, congratulations to Teruya Kakumae for winning his third title here in Shizuoka! Third time’s the charm, indeed!

The first Grand Prix of the weekend here in Shizuoka is in the books! Without further ado, let's take a quick look at the key moments which defined this Legacy Grand Prix! Top 100 Metagame...

After fifteen rounds of Legacy, eight players rose to the top! Check out what they piloted to make the Top 8 of Grand Prix Shizuoka (Legacy) 2018! Congratulations to Toru Takisaka, Akihiko...

It’s a little heartbreaking. All near misses are. These players were but one match win, or even one match point away from cracking the Top 8. Nonetheless, good job for coming in 9th to 16th in a...

Day 1 of Grand Prix Shizuoka (Legacy) 2018 has concluded! Out of 1429 competitors, only 253 made the Day 2 cut. Eight players achieved the perfect record, including former Player of the Year and Pro Tour Hall of Famer Kenji Tsumura who sat in the top spot.

Tomorrow, Day 2 of the Legacy Grand Prix will ensue, as Day 1 of the Standard Grand Prix begins.

Round-by-round standings, articles, and non-video coverage of Grand Prix Shizuoka 2018 begins Saturday 9 a.m. local time. Due to time zones, that's Friday at 4 p.m. PT/7 p.m. ET/12 a.m. UTC. Be back to catch all the updates, for tomorrow will be a truly action-packed day!

Out of 1429 players in Day 1, only eight players achieved the pristine record. Let’s take a look at what they piloted to perfection in Day 1! Top left to right: Kenji Tsumura,Yuuta Hirosawa,...

This weekend, the Twin Messe in Shizuoka played host to Japan's first double Grand Prix weekend, featuring a Legacy Grand Prix on Friday and Saturday, as well as a Standard Grand Prix on Saturday...

Out of 1429 players in Day 1, only eight players achieved the pristine record. Let’s take a look at what they piloted to perfection in Day 1! Top left to right: Kenji Tsumura,Yuuta Hirosawa,...