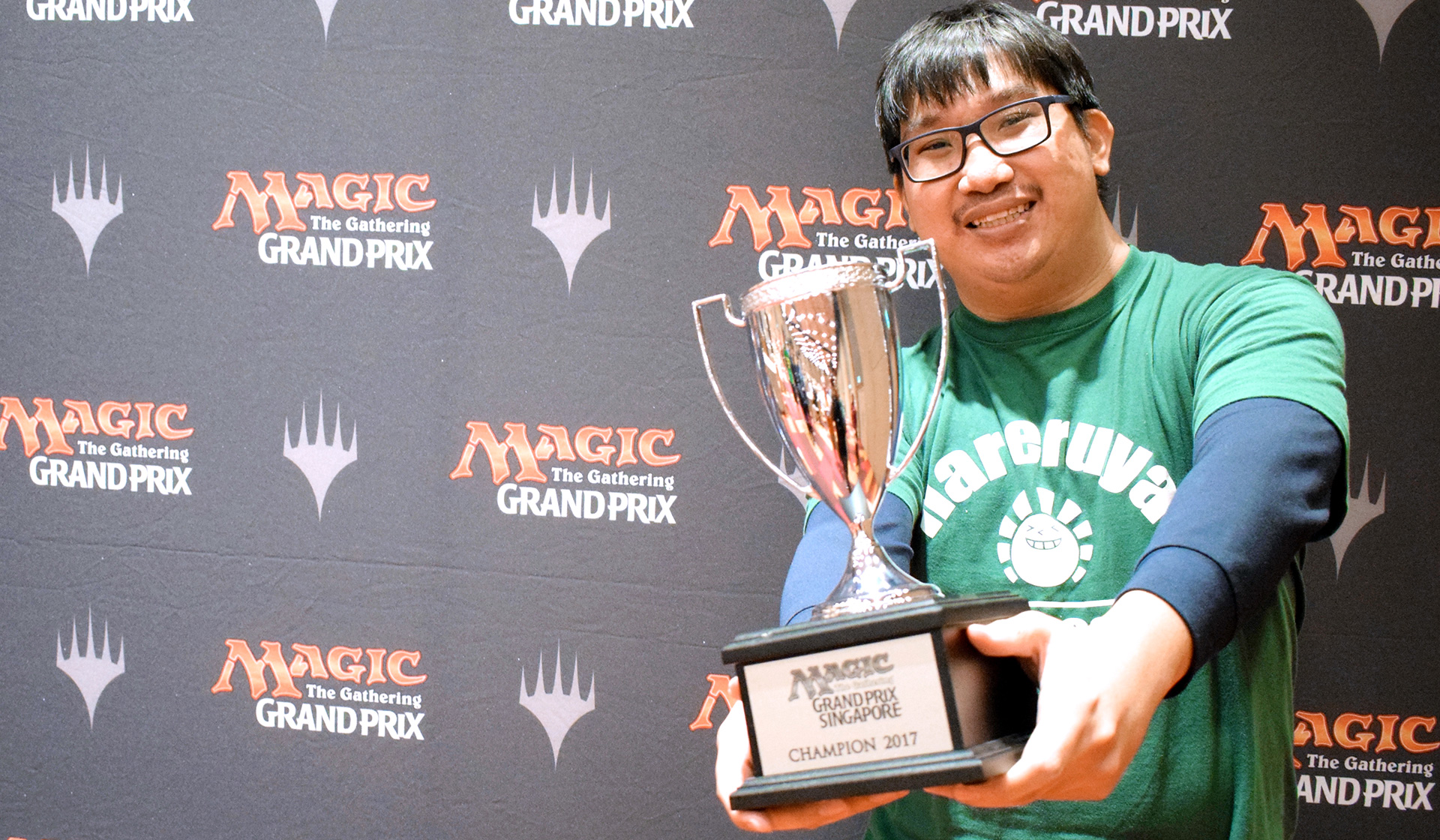 THE HASHTAG FOR GRAND PRIX SINGAPORE IS #GPSING. JOIN THE CONVERSATION.

After nine rounds of Ixalan Sealed Deck and six rounds of Ixalan Booster Draft, the field of 575 players was down to eight. Three players from Japan, two players from China, and one each from Singapore, Hong Kong, and the Philippines. In the end, it was Lim Zhong Yi who emerged victorious.

After winning Singapore Nationals this year, Lim kept up with his hot streak and showed everyone why he was worthy of lifting the champion trophy on his home turf. Cruising through the Swiss Rounds all the way through to the elimination rounds, he even beat fellow Singaporean (4) Kelvin Chew twice and Tomoharu Saito twice on his journey to the top.

Assembling a White-Black Vampires deck (interestingly, the twenty-four boosters in the Top 8 draft did not offer a single Anointed Deacon), Lim used the lethal combo of Call to the Feast and Sanctum Seeker to defeat Pan Minxing in the finals. Both Chinese players - Gu Rong and Pan - advanced to the semifinals to play against one another where Gu fell by the wayside.

Quarterfinalists Yam Wing Chun, Jefferson Lee, Kenta Harane, and Shuhei Nakamura, round out this star-studded Top 8. With that, we’ve (almost) come to the end of 2017!

Hurrah, the trophy was defended with success! Congratulations to Lim Zhong Yi, your Grand Prix Singapore 2017 Champion! You’ll always be our Master Zhong!

As Grand Prix Singapore - and 2017 - drew close, we invite you to join us in celebrating the most memorable moments of the weekend and the year. Bidding Goodbye to Triple Ixalan Draft This...

As it seems, we're down to just the final eight players! Arranged according to their Swiss standings after Round 15, let's check out their Ixalan Booster Draft decks! Yam Wing Chun...

After surviving nine rounds of Sealed Deck and six rounds of Booster Draft, these eight players are ready for the Top 8! As expected, a lot of big names rose to the top from among a stacked field....

Hundreds of players from around the region have converged at the Singapore EXPO Convention & Exhibition Center. After nine rounds of Sealed Deck, the field of 575 was down to 185. Only two players achieved the desired 9-0 run. Takaya Kensuke and Tomoharu Saito were the only undefeated players left which mean that they were well-poised to make their first and twenty-sixth (!) Grand Prix Top 8 respectively.

The Grand Prix might not be as huge as other Premier Events, but it was undoubtedly stacked with an immense amount of talent. The 8-1 players ran from the third seed all the way to the twentieth seed. Multiple Grand Prix winner Yuuki Ishikawa, followed by Pro Tour Top 8 competitor Yam Wing Chun. Next came reigning Singapore National Champion Lim Zhongyi, followed by Pro Tour Hall of Famer Shuhei Nakamura, as well as Heng Chye Hwee and Kiwanont Sukhum, veterans from their respective communities. It would not be surprising we told you this was the Top 8, but since there were still six more rounds to go tomorrow, anyone can overtake!

Day One Highlights of Grand Prix Singapore by Chapman Sim

Nine rounds of Sealed Deck elapsed and the field of 575 was boiled down to just 185. Before we head into Day Two of Grand Prix Singapore, let's discover some of the top stories of the...

To pull ahead of the pack, it is always better to show up with byes. Yesterday, eight players earned themselves two-round byes for their valiant efforts. As we kick start Grand Prix Singapore,...